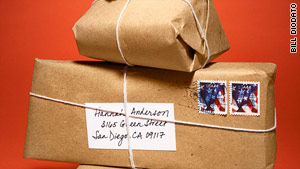 All sorts of gourmet companies will send treats right to your door.
STORY HIGHLIGHTS

(OPRAH.com) -- One of the best parts of growing older is no longer being assailed by articles promising to teach me how to drive my man wild in the bedroom. I've seen "wild," thank you very much.

But that doesn't mean I don't have a favorite new between-the-sheets trick: ordering food over the Internet.

It is no small miracle to be alive during an era when it's possible to procure heaps of great food without getting out of bed. If I'd been born during the 99 percent of human history that fell within the hunter-gatherer era, I'd probably be outside right now scouring the wilderness for sustenance that might, if I was lucky, taste like manioc.

Instead I live at a time when all I need to do is turn on my computer, push a few buttons, then sit back and wait for the UPS truck to come sailing up my driveway laden with tamales from Tucson or cherry pie from Michigan, all safely nestled among ice packs.

The Internet has changed shopping. Americans spent $130 billion online last year, according to ComScore, an Internet marketing research company. And U.S. Census Bureau data shows that electronic sales of food, wine, and beer have more than tripled since 2002.

The Web has also changed the very texture of daily life for anyone who ever moved away from a foodie town, like me. Since leaving New York two years ago, I've been sideswiped by cravings that leave me stunned, hungry, wistful.

Mope? No way. I visit Foodzie or Penzeys Spices; I click over to La Quercia or Rancho Gordo, and my longing fades, replaced by this curious new thrill: the pleasure of e-shopping.

It wasn't always like this. At first I believed that there was no way a Web site could live up to the experience of, say, walking into Murray's Cheese in Greenwich Village and breathing in the complicated dairy tang of 200 cheeses mingled with the siren smell of prosciutto. But once I started clicking around, I discovered sites that aren't just pale simulacra of real-life shopping.

The best offer online experiences that are altogether satisfying. Murray's, for example, has a feature called virtual cheesemonger that works like this: You take a quiz and the result matches you with an expert who's as daring as you are, stinky-cheese-wise. His or her personal favorites are listed, along with descriptions like "This is my favorite blue. It has a rich flavor and a little creaminess and a little crumble. I serve it by itself, with pears, or melting on a thick steak." Click -- into my shopping basket it goes.

Oprah.com: How to grocery shop the smart way

I also discovered treasures online that are nearly impossible to find anywhere else, even in the best specialty food stores.

Anson Mills, for example, sells early-American grains that they grow organically and mill every week. "

We started out marketing only to chefs," says Glenn Roberts, the company's founder. Why? In part because the products stay fresh at room temperature for only ten days, something most supermarkets can't accommodate.

But the growing cadre of fans have learned to adjust -- like the woman I met last summer who devoted half the space in her deep freezer to Anson Mills' flours, a practice that struck me as slightly crazy until I spent a few hours in her kitchen eating graham biscuits hot from her oven.

Another benefit of buying online from places like Anson Mills, Lava Lake Lamb, or Rancho Gordo is that you experience the culture and backstory of a product: where it comes from, who makes it, and how it's made. Add in recipes and evocative pictures -- Lava Lake Lamb's sausage sizzling on a skillet over a campfire in the Pioneer Mountains, Rancho Gordo's steamy carne en su jugo -- and you quickly find yourself in a kind of closed loop of craving and buying.

Let's say you just like discovering new foods. For that, there are numerous online gourmet shops, places where the selection reflects their owners' keen and experienced palates.

Zingerman's is one of the best. Exploring it is a bit like walking through a charming, café-filled town populated by witty, knowledgeable locals. An entry for Welsh sea salts says, "When your guests ask what's for dinner you can answer, 'Chicken and Halen Mor Pur Trwy fwg Derw Cymru!'"

Zingerman's forte is not just its selection or its clever prose, however, but its cultishly famous kits, baskets, and care packages. I have friends who won't buy gifts anywhere else. My favorite, the Reuben sandwich kit, is a DIY dinner that arguably stands up to the best that Katz's Delicatessen has to offer.

These specialty-store Web sites are fun to explore, but if you already know what you want, you're often better off going directly to the producer. Almost every foodmaker in the country will now ship directly to you, typically for much less than the cost of going through a middleman. A pound of Humboldt Fog goat's-milk cheese, ordered off Zingerman's, will run you $35; the same amount from the cheesemaker, Cypress Grove, is $20.

A best-of-both-worlds option is Foodzie, started in 2008 by Emily Olson, a 25-year-old food lover, her computer-science-major fiancé, and their business-major friend. It's a place where small-scale and artisanal foodmakers can market their products directly to consumers.

Emily et al. have tasted everything on the site. "Food is hard to judge just by looking at it," she says. "We provide that filter." You the consumer have the benefit of perusing some 1,500 items collected in one virtual place, all of which will be made or packaged to order and shipped straight to you.

Of course, there's no question that having food sent to you from just about anywhere is cheaper than flying your entire self to Thailand for some delicacy that left an indelible imprint on your amygdala while you were backpacking 20 years ago.

Check out ImportFood.com in that case; it posts video clips of Thai street-food vendors preparing dishes such as crab fried rice, pork satay, and pad Thai. It puts you right there -- except that if you were actually standing on a sidewalk in Saochingcha, you couldn't slide your mouse over, print a recipe, then add the ingredients and equipment, from green papaya to a "street-vendor wok," to your shopping basket.

Despite all these discoveries, my conversion to exurban life was not seamless. Because, well, there was still this guilt that racked me every time another huge carton appeared on my doorstep. I couldn't reconcile my growing habit with my purported support for sustainable eating.

Then I talked to Christopher Weber, research assistant professor of civil and environmental engineering at Carnegie Mellon University, who recently cowrote a study on the carbon footprint of e-tailing and found that it's surprisingly modest -- if you buy direct from the producer.

"The biggest reason you see greenhouse-gas savings is that you don't drive to and from the store," he says. Indeed, "customer transport" accounts for 65 percent of the energy spent on traditional shopping. "Then the store itself needs to be lit and heated," he said. Add to that distribution and warehousing, and the UPS guy starts to look more and more like Al Gore.

A year ago, Weber did another study, which examined the carbon footprint of eating locally. He found that what you eat (in particular, whether it's red meat or not) matters far more than where it comes from. Still, the professor didn't give me a total free pass: "Usually, the packaging question comes out better for the retail store." "Ugh, don't remind me," I thought, eyeing the heap of styrofoam and cardboard boxes that were accumulating by the back door.

One other downside to virtual shopping is that you never exit a Web site with a bag of provisions swinging from your hand. Often these days I find myself waiting. And waiting. And sometimes, depending on the e-tailer, waiting so long that I forget what I've ordered until it shows up on my doorstep and I think, "Well, then! Crab cakes for dinner tonight!"

Yet whenever impatience gets the better of me, I curl up in bed and contemplate Queen Isabella, the patron saint of food delivery, who had to sit around for seven months wondering when Columbus would show up with the delicacies she'd requested from the New World.

And it occurs to me that craving foods from far away is not an extravagance of just our lazy, overindulged era. The human desire to taste something new -- pepper, spices, seeds, fruits -- has been a motivating force for thousands of years, worth building roads and launching ships and risking lives for. Foods from far away are part of what makes it so very cozy to stay right here at home.

By Celia Barbour from O, The Oprah Magazine, February 2010