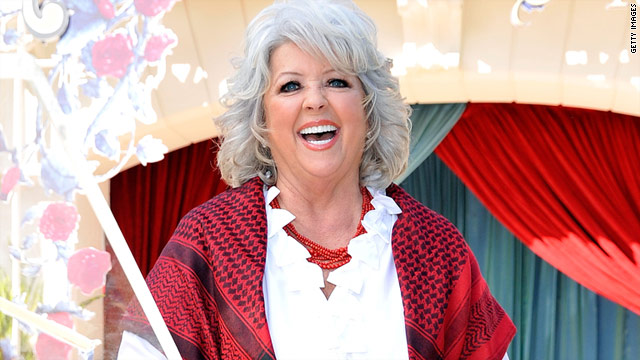 Paula Deen plans to only take the vitamins her doctor tells her to and save the gummy bear vitamins for dessert.
STORY HIGHLIGHTS
RELATED TOPICS

(Oprah.com) -- Whatever your food resolutions, look to these culinary all-stars for inspiration.

I have two New Year's resolutions for 2011:
1. I resolve to open a good bottle of Champagne at least once a month in celebration (specific reason not required!).
2. And, as always, I resolve to eat more of the good stuff -- chocolate.

I want to try to eat seven little meals a day rather than three big ones -- it's supposed to make digestion easier. And I'll try to do a juice cleanse; when I did one before, I was on cloud nine.

Anthony Bourdain
Chef, author, and host of "No Reservations"

I would love to learn how to make pasta from scratch. My wife's family is Italian, and this would be a way of embracing her heritage. She's a brutal critic, so it'll have to taste good!

I'm putting a pretty compost bucket on my counter so I remember to use it all the time. I compost vegetables and fruit and put it right in my garden. But compost can also be given to a farmer at the market, and some cities even have programs to collect it.

I'm trying to eat in moderation, so I'm going to have only three-quarters of the food put in front of me in a restaurant. As a chef, I want to try everything, but this way I can enjoy and save calories.

I'm becoming convinced that taking all sorts of vitamins isn't necessarily good for me. I have these gummy bear vitamins -- oh my God, they're so good -- but if I pop them all day, that's 100 grams of sugar! So I'm just going to take the vitamins my doctor tells me to and save the sugary ones for dessert.

I want to make sure to include a fruit or vegetable at every meal and snack. So I'll ask myself: "Where's the color?" If I'm making a scrambled egg, I'll add chopped tomato, or I'll toss in spinach when I sauté shrimp.

I make one resolution a year, and I take it pretty seriously. Last year it was to lose a few pounds -- did that. This year I'm going to raise chickens. I really like eggs, and I don't want to have to worry about the chicken's welfare, or what's in the egg.

I need to get more calcium in my diet, but I want to do it without supplements. I like to get my nutrients from real foods, so I'll make dairy a priority -- milk for breakfast and lunch, and ice cream at night!

Quinoa is one healthy grain, full of both fiber and protein. I plan on using it in place of white rice in salads, soups, and stir-fries, like my quinoa salad with snap peas, tofu, and ginger vinaigrette.

I want to cook my vegetables just enough -- not overcook all the nutrients out of them. Instead of boiling them forever, I'll roast, blanch, or steam. For example, I'll roast a combination of sweet potatoes, parsnips, and potatoes, or broccoli and cherry tomatoes.

Cristina Ferrare
Host of "Cristina's Big Bowl of Love," premiering this month on OWN

I'm very volatile, a stereotypical Italian, and sometimes I act without thinking -- that's definitely true with food. This year I want to stop and rethink basic actions, like inhaling a pizza just because I'm hungry. Instead, I'll have a big Caesar salad first to fill me up. Then I'll have my slice of pizza and be able to stop at that.

In years past, I've tried revisiting a food I think I don't like -- recently it was Brussels sprouts, and before that, asparagus. Now I'm going to give tripe another shot. I want to keep my mind open because I have kids, and I want them to try everything.

Michael Pollan
Sustainable-food advocate and author of "The Omnivore's Dilemma"

So often we get in recipe ruts, making the same thing over and over. I have all these new cookbooks lying around that I rarely, if ever, use. This year I want to make a new dish every week. Just go to the shelf, open a book, and make one thing I've never had before. One book I'm excited about exploring is "Heart of the Artichoke," by David Tanis -- I'll make his pork scaloppine with zucchini fritters.

My family has a very hectic schedule, so it's important to me that I make dinner with my kids and we all eat together. This year we want to master more vegetarian dishes, like simple bruschetta, that are fun to cook as a team.

I have a big folder of recipe clippings -- they probably go back at least ten years! My goal is to scan them all into my computer, or at least get them into a binder. It's time to stop having them floating around everywhere.

Paul Greenberg
Author of "Four Fish: the Future of the Last Wild Food"

I'm going to use the whole fish more. In the past, a three-pound fish usually meant just two servings, a fillet from each side. But I've been learning that you can make a sauce out of fish heads and chowder out of the bones.