Pieces of sports history come with a price 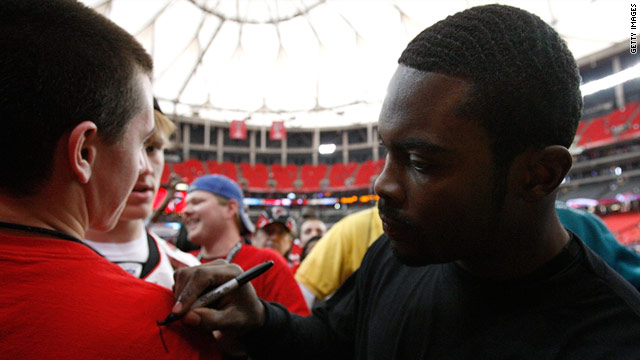 Michael Vick signs a T-shirt for an Atlanta fan before a 2009 game.
STORY HIGHLIGHTS

(CNN) -- Tashard Choice recently had a great opportunity to pick up a nice present for his 3-year-old nephew. The Dallas Cowboys running back went up to Michael Vick after a game and asked for his autograph.

Well, that kind of blew up in his face. Here he was, just trying to do a nice thing for a child, and people get all crazy upset, just because Vick plays on the other team. In a sign of the times, Choice even felt it necessary to apologize on Twitter.

Here's hoping that if you go out to get a sports memorabilia gift this holiday season you deal with a lot less criticism. But you might feel some heat. After all, there are some cool items, but they can be pricey, especially if someone like Vick signs his name to them.

We'll help you sort through the many sites that sell sports items and point you toward a few things we might even include on our wish list.

It's understandable why Choice's nephew wanted Vick's signature. He's one of the hottest athletes in the country right now, likely leading Philadelphia to the NFL playoffs.

If you hunt around the internet, you can find several sites selling a jersey, even one selling one he wore during his college career.

The most popular jersey would be the one he wears now, No. 7 for the Philadelphia Eagles. Or you could go for the autographed Eagles' jersey. That one is $592 at Fans Edge. Or you could save a little coin and get one from the Falcons (the team he played for until he went to prison for his role in a deadly dogfighting operation) for the sale price of $125.

Want a less controversial quarterback? Tom Brady's New England top is $760 in blue and $1,049 in white.

If the person you are buying for digs historical baseball moments, he or she might like a ball autographed by pitcher Armando Galarraga and the umpire who cost him his perfect game, Jim Joyce. The grace each showed after Joyce's blown call is an example of sportsmanship most fans will talk about for years. One ball, $573. It's a souvenir commemorating a moment that hadn't happened before and probably won't again.

While neither of those men seem likely candidates for the Hall of Fame, Andre Dawson is one of the all-time greats and is part of the 2011 class that will be enshrined in Cooperstown. He was widely admired by all baseball fans during his 21-year career.

You can get an autographed Cubs replica jersey at Tristar Productions for $259. (You'll have to pay extra to get it in a frame.)

One of the most exciting moments of the sports year -- at least for U.S. soccer fans and even bandwagon fans -- came at the World Cup, when in its final group game the United States needed a goal to move into the prestigious round of 16. All-time leading scorer Landon Donovan pounced in the last minute, sending bars and offices across the country into scenes of pandemonium.

SportsMemorablia.com has a few autographed photos of Donovan and his teammates celebrating what is one of the signature moments in U.S. men's soccer history for $263.

Hockey fans will long remember the exciting Olympics men's final, won by Canada when Sidney Crosby scored in overtime. NHL Auctions has some Team Canada jerseys, including one signed by Ryan Getzlaf ($229). If you want one, bid soon, as that auction ends Monday.

NASCAR fans are fiercely loyal. But if you are giving to someone and you don't know who his or her favorite driver is, you probably can't go wrong with a Jimmie Johnson die cast. Johnson won his fifth consecutive championship this season and die casts are cool small-scale replicas of the cars used in races.

If you go to Johnson's Team Lowe's site, there are many cars to choose from, including cars from previous years and cars with the various color schemes used throughout the year.

Want something that might make a cool addition to the home office or the man cave? Consider seats from stadiums that met their demise. For instance a pair of seats from old Yankee Stadium will cost you $1,500 at Steiner Sports. Steiner also has seats (or parts) from the Meadowlands and Wrigley Field.

But let's go big. Say you have a blank check, and the fan who has almost everything. Well, Babe Ruth collectibles are some of the most sought after sports items on the planet.

Sports Memorabilia offers five bats from the Sultan of Swat at $125,253 (and 50 cents). They were used in games at the time he was being sold from the Red Sox to the Yankees and making the transition from pitcher to right field.

If that price is too steep, the company offers a store model bat for just $964. Still too much? They also have a Babe Ruth card by Topps from 2009 for $17.

While we're at it, everyone loves a good sports movie. Look how much bank the film "The Blind Side" took in at the box office.

So, while it may not qualify specifically as "sports" memorabilia, you could also buy a prop or costume from the hit film.

Premiere Props in El Segundo, California, offers more than 100 items from the film, including a green Crusaders jersey worn by Quinton Aaron for $799.99. His stunt double's uniform is just $599.