Geese, cookies and iPods: Buying gifts that give back 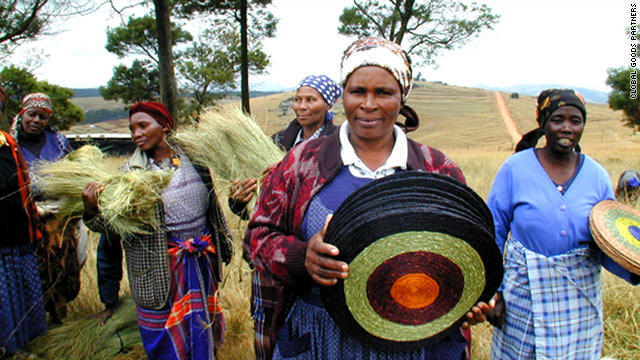 Since 2005, Global Goods Partners has worked with artists around the world to sell their crafts.
STORY HIGHLIGHTS
RELATED TOPICS

(CNN) -- If you want to feel twice as nice about holiday gift giving, try donating to a charity.

About half of American adults say they will give money to charity this holiday, an increase from 29 percent in 2009, according to a November study from World Vision, a Christian humanitarian organization. The survey was conducted by Harris Interactive, a polling company.

The Center on Philanthropy at Indiana University released some optimistic results showing recovery among nonprofits after they watched donations plunge with the economy. They found 36 percent of charities reported an uptick in the amount of donations they received in the first nine months of the year. In 2009, 23 percent of charities saw an increase during the same period.

Una Osili, director of the Center on Philanthropy, says she is also seeing more private companies collaborate with nonprofits to sell creative and tangible items that help other people and places.

But Osili warns, "Even as giving is increasing, there is still a large amount of unmet need to help people in the U.S. and those abroad."

With the click-and-buy simplicity of the internet, it has never been easier to donate. For altruistic gift givers, here is CNN's charitable gift guide with fun, practical -- and even edible -- presents for almost every kind of person and cause.

A burgeoning number of websites are promoting the work of artisans in impoverished communities around the world. Nest, a nonprofit that provides micro-loans to female artists and then sells their artwork, is featuring brightly colored decorative plates from Turkey for $10 and hand-carved statutes from Rwanda for $24.

Ten Thousand Villages is a fair trade retailer that promotes handmade artwork from all over the world. Founded in 1946, the organization started out of a car trunk and has expanded to more than 390 stores in the United States. If you don't live close to one of the company's stores, you can find a diverse selection of items online, including intricate stone boxes under $40 crafted by underprivileged young men in Vietnam and heirloom vases around $65 that have been hand-burnished by indigenous Peruvian artists.

If you want the power to customize your gift, giving money to DonorsChoose.org will let you do just that. The online charity, which was named one of Oprah's Favorite Things, lets public school teachers across the country post their requests, which range from extra pencils for a poetry club to microscope slides for science class.

You select the project you want to support. In return, you receive a cost report that shows how the money was spent so you can be assured your donation is going to the right place. If you give more than $100, you receive handwritten thank-you notes from the classroom you helped.

Geese, camels and cows aren't just a nice gift for some impoverished families around the world. The animals can be their lifeline.

Heifer International has been working to end world hunger for more than 65 years by donating farm animals, seeds, trees and educational training to families. You can enjoy reading their holiday catalog and decide whether you'd like to donate a water buffalo, a llama, a pig, a hive of bees or flocks of chickens or geese.

For $20, you can purchase a flock of geese for a family. Some geese can lay up to 75 eggs a year, the nonprofit reports, which means food and extra income for the recipients. The water buffalo is a bigger gift, with a price of $250.

You also can donate on behalf of a friend or relative and let them know of the gift given in their honor.

One person's trash can be another person's treasure. If you're a fan of vintage clothing, then check out Shop Housing Works. The site offers bargains on second-hand designer items. You ladies can score a Diane von Furstenberg zebra print dress for $50. For the guys, there's a striped Marc Jacobs polo for $29.

The money goes to Housing Works, a community-based service organization that works to assist HIV/AIDS patients in New York.

You can find eco-friendly bracelets made of recycled papers and earrings made of seeds at Global Goods Partners, a nonprofit that helps women in Asia, Africa and the Americas. The agency, founded in 2005, provides literacy programs for women and safe housing. If you're on a budget, the group offers a selection of gifts under $15.

Do you have family and friends with a sweet tooth?

You can satisfy their cravings with gourmet turtles and caramel-covered popcorns, starting as low as $2 from HELP USA. All proceeds will go to this national nonprofit that works to house the homeless and help them become self-reliant. Since 1986, the organization has given assistance to more than 250,000 people by providing shelter and on-site support services.

If you're looking for a stocking stuffer, Biscoff Gourmet Cookies and Gifts is selling its famous crunchy cookies in a festive box. A set of six boxes costs about $15. Ten percent of the proceeds go to support Teach for America, an organization that aids new teachers serving underprivileged kids in low-income communities.

Tech giant Apple has joined forces with (PRODUCT) RED, an organization fighting to eliminate AIDS, to launch the special edition red iPod Nano 8 GB for $149. Up to 50 percent of the proceeds will go to the Global Fund to fight AIDS in Africa. The site reports that more than 3,800 people die every day from AIDS in sub-Saharan Africa.

Several beauty companies are finding ways to make customers beautiful on the outside -- and inside. Smashbox Cosmetics will donate a portion of sales on eye shadow sets to the Children's Miracle Network, a nonprofit raising funds for hospitals.

Hair product company Aveda also released a holiday gift set with a variety of eco-conscious shampoos and hair products. A part of the profit from the gift sets will go toward saving the Colombian Rainforest. The purchases come with accessories made from tagua nuts made by female artisans in Bogota.

TOMS, an American footwear company that was launched in 2006 by a participant on the reality television show "The Amazing Race," has a motive beyond profit: Each time a customer buys a pair of shoes, the company will give a pair to a child in need. The company's "One for One" mission tries to transform "customers into benefactors."

These comfy and stylish flats come in dozens of different patterns and colors. Children's flats start around $35 and adult shoes cost around $55. As of September 2010, TOMS had given more than 1 million pairs of new shoes to children in poverty.

Cancer is the leading cause of death by disease among U.S. children under age 14, according to the National Cancer Institute.

All the funds from items purchased from the annual "Hope Gift Book" will be given to St. Jude Children's Research Hospital, a pediatric cancer research center. Parents can find unique gadgets for kids such as a dog shaped pencil sharpener and a Juicy Couture gumball machine for under $25.