Get your geek girl on 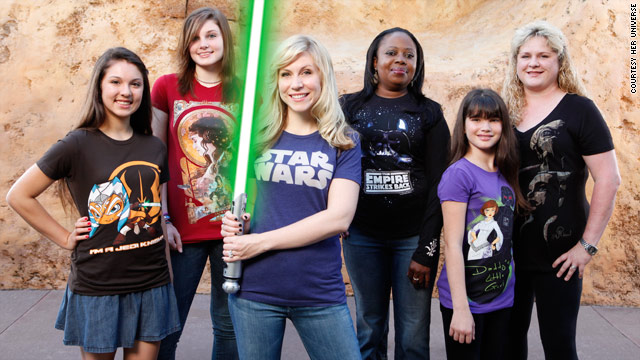 Ashley Eckstein, center, shows off some of the clothing from the Her Universe line.
STORY HIGHLIGHTS
RELATED TOPICS

(CNN) -- The story of Katie Goldman is one that young and (ahem) older "girls" all over the country can relate to.

Teased for bringing her "Star Wars" Thermos to school, the first-grader opted instead to shield her love of the series from public scrutiny and asked her mom for a pink Thermos instead.

At the tender age of 7, the boys in her class had a hard time accepting that she could like light sabers and Jedi knights just as much as they did. It would be easier for Katie to be what people expected her to be, even if it meant hiding part of who she really was. The more times change, the more sci-fi stereotypes stay the same.

Not just 'guys living in their basements'

The evolution of science-fiction and fantasy started decades ago, but sad to say, as Katie's experience shows, it's still not there yet. Part of the reason could be that many of us, um ... shall we say, "older" fans have also shielded our love of the great imaginative stories that sci-fi delivers from public view.

I admit that whenever I told anyone I work with at CNN that I really loved the "Battlestar Galactica" series on Syfy, I quickly followed with a "Time magazine called it the best television series of 2005," as if the fact that I loved the show weren't enough.

"Laugh if you want," wrote James Poniewozik, "but this story of enemies within is dead serious, and seriously good."

I (like many others, I suspect) thought that people simply couldn't take me seriously if they knew that part of me loved these fascinating tales of faraway places, worlds unexplored or the ever-present themes of beating the undefeatable, facing the ultimate challenge and overcoming evil. The numbers show I'm clearly not alone. Just take a look at who's watching the network solely devoted to science-fiction and fantasy programming.

"It's always been very gender-balanced. It has this misconception that it's about the guys living in their basements. Our audience has been about 50-50," said Dave Howe, president of the newly rebranded Syfy network (formerly SciFi). "I think it's one of those urban myths that's existed for a very long time: They are the stereotypical sci-fi fan, and people ignore women and families ... dating back to when we were all at school."

So you think you know the sci-fi audience? Did you know that some 67% of viewers who tune in to watch Buffy slay the evil vampires (in reruns, albeit) are women? And they're not just tuning in to see the exciting possibilities vampires present. Howe -- who is also president of a horror flick network called Chiller, which he says reaches about 40 million households -- says that about 53% of the "Masters of Horror" audience are female.

"People think they're not into science-fiction, and then you look at who's going to see 'Harry Potter' or 'Spider-Man' or 'Twilight.' ... Science-fiction is the most mainstream genre, period."

Oh, yeah, did I mention that Howe says the average age of those Syfy-watching women is about 45?

One size does not fit all

It's much better to be a "Star Wars" fan today than it was when I was kid. Not because the story has changed but because the characters have. In "Star Wars' " new animated life on Cartoon Network (which, like CNN, is owned by Time Warner) "The Clone Wars" features a girl who is a Jedi apprentice.

The character Ahsoka Tano is a strong-willed, determined and often sassy Jedi-in-training who at times comes to the rescue of her know-it-all master. It's something not lost on actress Ashley Eckstein, the voice of Ahsoka Tano.

"I have to give Lucasfilm credit for creating the character of Ahsoka," Eckstein said.

"She is the first female Jedi who has been the focus of the series. They have created a series with several female characters as lead characters, and sometimes the women carry the episodes. They are making it OK for these women to be the leads. Now, when the kids are playing 'Star Wars' on the playground, there is a Jedi for the little girls to be. For the girls who don't want to be a princess, they can be a padawan."

Eckstein was so passionate about giving the girls permission to "get their girl on" that she negotiated rights with Lucasfilm to develop a line of clothing called Her Universe and other products aimed strictly at the female market.

"I started working on 'The Clone Wars' almost five years ago, and I was always a 'Star Wars' fan and wanted to show it off, and so I went to the Web and to stores, and I realized it didn't really exist. There were very few products, and on one site, under the women's section, they had men's shirts," said Eckstein, who is persuading executives at Disney to carry the line.

She also gives credit to another actress, Alyssa Milano, who started a clothing line called Touch for female sports fans.

"I'm aware of her line because my husband plays baseball, and I've bought several of her pieces," said Eckstein, who spent close to three years convincing people there was a market for this.

"We started at conventions and events and online and at San Diego Comic-Con, where the 'Star Wars' celebration and the support was overwhelming. I don't want this to just be a merchandise line. I want it to be a community for female fans. One thing I found in my research is that girls were hiding the fact that they were sci-fi fans, and many women were afraid to say 'I'm a girl, and I like "Star Wars" or "Star Trek." ' They didn't feel like they could be taken seriously."

And Eckstein has a message for 7-year-old Katie: "We can show our pride and be a girl at the same time and be proud of it. I'm a nerd and a geek, and I'm proud of it. So show who you are and what you like, and if you're confident, people will leave you alone."