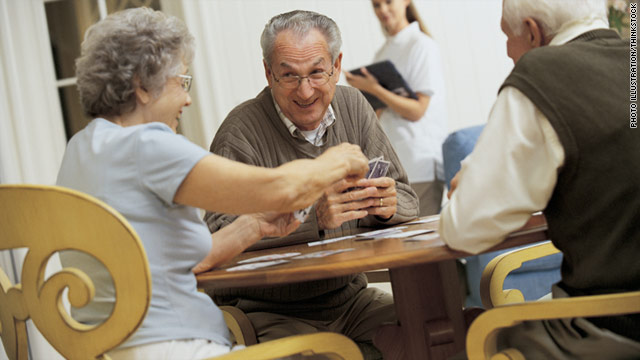 Howie Kahn: "Social dominance isn't something I ever expected from my grandmother."
STORY HIGHLIGHTS
RELATED TOPICS

(Oprah.com) -- Grandma's waiting for me on a lone bench in the heat, just beyond her building's shaded front entrance. She's wearing denim capris and a lightweight cable-knit sweater that precisely matches the yellow patent leather moccasins on her feet. Saucer-sized sunglasses block out her face, and her silvery hair is cut short and chic.

I didn't want to meet Grandma out here. At 86, she's declared herself done with sunscreen. Couldn't we meet at her room instead? "It's not a room," she snapped. "That's offensive. This isn't a nursing home. It's my apartment." More specifically, it's the senior living residence she's come to rule.

Social dominance isn't something I ever expected from my grandmother. Except when spending time with the family, she's mostly kept to herself. After my grandfather's heart stopped beating in 1965, Grandma gradually did away with the supper clubs and bowling leagues. Friends who still had husbands, she felt, couldn't empathize, and so she isolated herself.

There were kids to feed, bills to pay, clocks to punch. Dating? No chance. Grandma did interact with new men all the time, but as a saleswoman. She picked out shirts and ties, pocket squares and cuff links, like she had for her husband, but in a way that would never again leave her vulnerable to loss.

The wall Grandma had built around herself didn't start crumbling until eight years ago, when she moved in to a senior residence in suburban Detroit. Instantly there were people to deal with -- everywhere and at all times. Grandma was the new girl. Seven decades removed from high school, and she was once again confronting the notion of how to fit in.

Her first year there, instead of spending winter in Florida with my aunt like she usually did, Grandma opted to stay in Michigan, where it was freezing, primarily so she wouldn't come back to dining hall exile.

A lot has changed since then. Now Grandma holds an important elected seat on the residents' council, and enforces behavioral standards at the tables where she eats her meals and plays her card games.

When one woman dared wag a finger at her over a perceived canasta infraction, Grandma almost snapped it off. When a new resident wanted to sit at Grandma's dinner table, Grandma said the matter had to be put to a vote. Grandma, it seems, had morphed into a senior citizen Mean Girl.

I notice a group clustered near a woman with a lion's mane of white hair, some chunky orange jewels hanging around her neck. And while she clearly commands a certain respect among her clique, she lacks the mojo of a stander like Grandma, who never stops to sink into the couches where sitters sometimes doze off.

"In the lobby!" she says, indignant. "It makes it look like old people live here. If they want to sleep, they should go back to their beds."

Grandma's not shy about publicly vocalizing her disgust for slackers who reflect poorly on the group. When she tells a neighbor her hair looks like a "dishmop," the woman actually replies, "Thank you for letting me know." Under her breath, Grandma tells me, "Here, they appreciate my honesty."

No, she isn't shy with criticism -- Grandma informed me recently that my girlfriend moved out because I'd never make enough money to satisfy a woman, and that my writing had possibly peaked. But she's never really trained her sharp tongue on anyone but family. Her willingness to unleash it here is a measure of her newfound confidence in her position.

On the way to current events class, we meet a man who tells Grandma she "really fills out her outfit," as good a catcall as you'll get around here. Earlier, Grandma explained her position on male attention. "I allow some of the men here to flirt with me," she said. "I tease them, but what do I need a man for? Your grandfather's been gone for 45 years. After him, there's nothing else."

It's obvious she puts some effort into self-presentation, though, as do the other ladies here. Wardrobe matching now serves the same purpose as showing skin once did; sync the beading on your cardigan with the details on your brocade socks and you'll really start turning heads.

Oprah.com: The perfect recipe for family

Once class begins, Grandma scolds a woman sitting behind us who believes she is whispering, but whose busted hearing aid has made it impossible for her to gauge what a whisper is. "We have a speaker!" Grandma barks. Everyone applauds.

The man at the lectern, who is well into his tenth decade of life, continues part two of his three-part series on the collapse of the economy: "It's hard for young people today," he says, "to earn a decent wage." Grandma bumps my shoulder with hers. I'm unsure whether the contact is commentary on my occupational status or evidence of a balance issue.

Before dinner, as she does every night, Grandma occupies a table just outside the dining room. "I hold court," she says, and almost as soon as she says it, people begin to congregate around her. Every seat is saved for the regular cast -- all standers, no sitters.

When a woman who isn't part of the group tries to claim a chair, just for a minute so she can tie her shoe, Grandma tells her she'd better move on, and swiftly; the seat is spoken for. "Everyone's happy where they are," Grandma says. "If you try to take anybody's seat, they'll kill you."

At dinner I'm quick to say hi to the latest addition at the table, the woman most recently voted in. Her magenta sweater set perfectly matches the detail work on her cane, which marks her as a potential player.

The other ladies quickly jump into a conversation about what they should name their Wii bowling team; one suggests the Cougars. Then they try to peer-pressure the new girl into ditching her cane for a walker. Essentially, it's the same conversation younger women have about losing their virginity: all about what other people will think, how it will change you, and how to manipulate a new apparatus without getting hurt. "You'll get used to it," they tell the new girl. "It's only hard at first."

I keep waiting for Grandma to speak up, but she's surprisingly above the fray, working very hard at cutting up a friend's food. "Macular degeneration," Grandma tells me. The queen bee precisely tracks everybody's ailments. Grandma turns the woman's plate into a diagram for manageable eating, separating the tuna salad from the wax beans from the roasted potatoes, grouping each thing into a perfectly formed triangle.

If she's newly emboldened to boss around people outside the family, it seems she's also found genuine strength in being needed, in rediscovering the moxie it takes to give.

When the meal is over, Grandma ambles to the corner of the room to retrieve a friend's walker. Grandma shouldn't be getting around without her own walker, but I think she finds it useful here to demonstrate that she still can.

On her way back, she stops to speak with a woman whose face looked normal yesterday but today resembles a mask of rotten plums. She has fallen and bruised herself severely. Grandma did this once, too.

I'm watching, actually fearing that my new alpha grandma is about to administer some tough love. I'm ready to see tears. But as Grandma walks back toward me, I notice that the woman, so brutally and freshly injured, is somehow...smiling. I ask Grandma what she could possibly have said.

"I've learned compassion here," she tells me, simply. She knows I'm stunned. "I smile at everyone now. I'm finally at peace. You should come to choir practice tomorrow. I want you to hear me sing."

Oprah.com: 8 trick holiday situations and how to overcome them