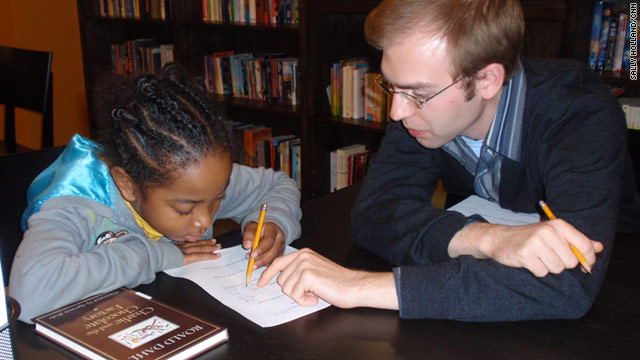 Washington (CNN) -- At first glance, it's a hoax: a storefront for a Museum of Unnatural History, complete with a bizarre animal skeleton visible through the front window and unicorn tears for sale. It's perfect for luring in curious children.

But when volunteers get kids past the upside-down coyote hanging from the ceiling and the owl with an elephant trunk, they shape young minds with after-school tutoring, writing workshops and books written by kids.

"I think the kids are tricked in and then, as they are talking to the person at the front desk, they are learning about what's going on in the tutoring center," said Gerald Richards, the chief executive of 826 National, the nonprofit network of tutoring centers that look nothing like classrooms. The Washington "museum," which set up shop in the Columbia Heights neighborhood in October, was the latest branch to open.

Each of the eight centers has an imaginative storefront that helps raise money and encourage creativity among students.

In Seattle, kids are lured into the writing lab by the Greenwood Space Travel Supply Co., which sells intergalactic peace treaties and travel cups. 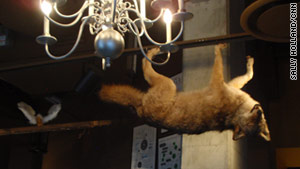 An upside-down coyote, an "owlephant" and unicorn tears are meant to get kids' imaginations going.

The original chapter opened eight years ago at 826 Valencia St. in San Francisco's Mission District. (As it spread, the original address inspired the name 826 National.) It was co-founded by Dave Eggers, author of "A Heartbreaking Work of Staggering Genius," and founder of the publishing house, McSweeney's.

Early on, organizers at 826 Valencia St. learned the space they'd rented was zoned for retail, so they needed to come up with something to sell. The space looked a bit like an old pirate ship.

"Someone thought, 'Why don't we sell pirate gear and see what happens?'" Richards said.

Since then, it has been fronted by The Pirate Supply Store, where shoppers can purchase hooks, peg legs and plank-by-the-foot.

Now, Richards said, profits from stores account for 20 percent of the teaching that goes on in the writing center.

And the imagination enticements work. 826 National is on track to serve 24,000 students this year through its tutoring centers and school outreach programs.

Sisters Teah and Janea Green have been visiting 826DC most afternoons since it opened.

"This place is awesome," said Janea, 10, as she worked on her multiplication homework with volunteer Matt Lemanski. "I really, really need help with my homework and my parents are busy sometimes."

"Sometimes we do poetry, sometimes we do math," said Teah, 9. When she doesn't have homework, she works on the story she is writing about a mermaid named Katopia. 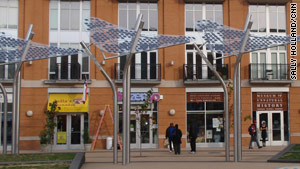 The Museum of Unnatural History fits among other shops and storefronts in Washington.

Writing is the primary focus at 826 centers, which also work with middle school and high school students.

It also publishes books written by students. Their latest, "I Live Real Close to Where You Used to Live," is a collection of student letters to First Lady Michelle Obama. It will be in bookstores on December 15.

The letters run the gamut from asking if Obama cooks with an Easy-Bake Oven at the White House, to a suggestion that she use robots to keep drugs off the streets. The book is a companion to one that came out last year that contains letters to President Barack Obama, "Thanks and Have Fun Running the Country."

Profits from the book sales are used to support the tutoring centers.

Kathleen Yancey, an English professor at Florida State University, said the 826 National centers complement the learning that goes on in classrooms. Schools are about college and job readiness, and tests that prove it, Yancey said. Those demands don't leave much time for playful reading or imaginative writing, even if it could help some students learn.

"If you want people to engage in activity, you find a way for them to have fun with it. 826 is a genius at that," said Yancey, a past president of the National Council of Teachers of English. "If [students] don't take any pleasure in it, they won't actually practice it. When they have fun, they won't quit on you."

Fun is what draws students in, too.