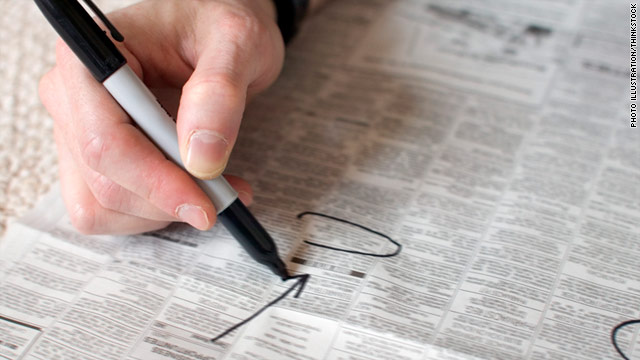 Non-traditional approaches to job searching can get you a job -- as long as they're not too strange.
STORY HIGHLIGHTS
RELATED TOPICS

(CareerBuilder.com) -- Taking a non-traditional approach to a job search can be a good thing.

Take the case of Alec Brownstein, an advertising professional who found himself looking for a new job last summer. Fed up with the traditional job search, he decided to try an unprecedented tactic.

Banking on the fact that "everyone Googles themselves," he bought sponsored links attached to the names of top-advertising directors. So, when the directors Googled themselves, Brownstein's ads would appear at the top of the results page.

The ads reportedly said "Hey, [creative director's name]: Goooogling [sic] yourself is a lot of fun. Hiring me is fun, too" -- and then provided a link to Bronstein's website. A few months (and only $6) later, Brownstein was employed by top-advertising firm Young & Rubicam.

But, for every unconventional job search strategy that works, there is another that not only doesn't lead to a job, but is just downright ridiculous. Below, job seekers and hiring managers tell us about the strangest job search tactics they've come across.

CareerBuilder.com: How to build your personal brand

1. "One of my clients received the following advice from a previous career coach: Never send a résumé when applying for a job, even when it is requested in the advertisement. Just send a pitch letter requesting a meeting with a company executive."
-- Lavie Margolin, job search advisor, Lion Cub Job Search

2. "I think this may be the craziest one I have ever heard. When I was looking for my first full time job, a friend's then-girlfriend (now ex-wife) told me, quite seriously, that I could assure myself a job by participating in a magical ritual involving crystals and mystical incantations. I asked her if I needed to sacrifice a chicken as well and she was offended, explaining that it was not the correct type of 'Magick' [sic]."
-- Eli Lehrer, national director, Center on Finance, Insurance and Real Estate, The Heartland Institute

3. "I think the worst advice I ever saw was in a LinkedIn group. Someone suggested that, in order to be able to get a chance to speak to someone at the recruiting company, you should [mail] a cover letter saying you have enclosed your CV -- but don't enclose the CV, and leave the envelope open so that it looks like it fell out in the post. The logic was that they'd then call you up to let you know, and you could have a dialogue. I personally would just think 'That person can't even seal an envelope, I wouldn't want to recruit them.'"
-- Antony, marketing manager

Careerbuilder.com: Five tips for confidently speaking up at meetings

4. "I have gotten some strange advice in my day -- one of the milder ones was to tape a plastic spoon to my CV and write on it (the letter), 'Need to eat.' But the one that takes the cake is to stand at a busy intersection in the upper-west part of midtown Manhattan wearing one of those sandwich boards -- a bulletin board that you wear, full body length -- over a nice suit that reads something like, 'Will write for food' or some variation therein. I am reaching the point where I am even considering it, though I'd request a full-time position rather than food because I fear that some employers might take me up on the offer: Write a story, get a sandwich!"
-- Ed Lieber, freelance editor/writer

5. "I used to know someone who would comb the obituary section of the New York Times for job openings"
-- Paul Solomon, Solo Management

6. "The absolute most-crazy search advice that I have heard has been typically coming from supposed job search gurus and career coaches who advise job seekers to pare down their universe of job prospects to focus only on the most promising ones. As someone who has looked at hundreds of thousands of sales prospects that I have generated for my sales teams over the past decades, I can state with conviction that it is impossible to tell which prospects are the best, which might lead to other prospects that are good and which are not worth wasting one's time on at an early stage in the process. By following the crazy advice that I have just described, a job candidate is really blowing his or her chances to get the best job that s/he can.

My advice to job seekers in 2010 is the same as my advice is to salespeople just starting out in a tough market: you need to increase the 'two Qs' of your efforts to increase results: quantity and quality. Basically, you must increase the quantity of prospects that you are working on (i.e., the number of job opportunities) and you must increase the quality of your effort on these prospects (e.g,., have a custom strategy to differentiate yourself for each opportunity, stay in contact more frequently, have better planned contacts, etc.). Ultimately, you must work harder and work smarter to achieve your goals in tough times."
-- JR Rodrigues , co-founder, JRBM Software