How to avoid holiday family fights 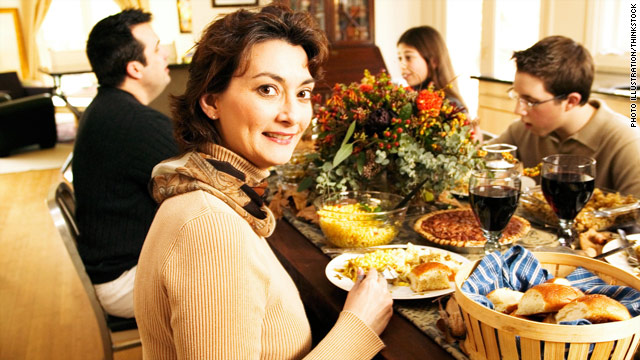 When family members reunite, fights can turn nasty. You can't control your relatives' actions, but you can control your reactions.
STORY HIGHLIGHTS
RELATED TOPICS

(RealSimple.com) -- "Everyone's a child at Christmas," the saying goes. At Thanksgiving, however, everyone simply acts like one -- petulant, complaining, unhelpful, boastful -- as they all assume their prescribed roles. (You, of course, are perfect.)

No matter how mature your relatives may be in everyday life, when thrown together in an old, familiar situation, they regress -- and their "issues" take center stage. Why? Experience has taught them that this behavior succeeds in getting people to focus on them and their agendas, says Stephen R. Covey, author of "The 7 Habits of Highly Effective Families. RealSimple.com: Etiquette advice for the holiday guest

While you can't control the actions of your role-playing relatives, you can at least control your own reactions.

Here, authorities on etiquette and family dynamics offer strategies for handling a tableful of problem personalities. As for you, just keep up the good work.

Often heard saying: "When I was in your situation, I knew exactly what I had to do."

Your course of action: "The criticizer relies on his ability to bait you," says Sue Fox, author of "Etiquette for Dummies". Don't take the bait: Thank him, point out facts he may have overlooked, and move on. If he keeps offering barbed comments disguised as advice, Caroline Tiger, author of "How to Behave", suggests cutting him off with a breezy "Don't worry about me -- I'm fine!"

Often heard saying: "Yup, just a sec...I'll be riiiight in."

The offense: Refuses to help with the cooking, cleaning, child care, or even candle-lighting.

Your course of action: "Entertain the possibility that this person doesn't realize anyone needs help, or perhaps he's worried that if he were given a task to complete, he'd fail," says Tiger. Give him precise instructions, something like "Vincent, it would be a great help if you went ahead and started rinsing the dishes. Let me get you an apron."

Often heard saying: Anything with exclamation points. "Hey, guys! Let's bundle up and go caroling in the snow!"

The offense: Hurls herself into the holiday spirit, donning seasonal sweaters with more doodads than a junk drawer.

Your course of action: If you're not in the mood or if her joyousness feels forced, the cheerleader can be extremely irritating, says Fox. Don't attempt to dampen her good cheer (she likes being the center of attention), but don't let her cow you into wearing felt antlers to the table, either. Just keep your distance.

Often heard saying: "The Feds said the raid could not have gone down without my tip."

Your course of action: "It's rude to embarrass a guest who might be exaggerating due to feeling insecure," says Tiger. "A little hyperbole on his part isn't too much for you to endure if it makes him feel more comfortable." Besides, everyone else at the table probably sees right through him, too, points out Barry Greenwald, Ph.D., associate professor emeritus of psychology at the University of Illinois at Chicago.

Often heard saying: Nothing. She's still in the kitchen, slaving away over a hot stove.

The offense: Lets everyone know just how many potatoes she had to peel -- and shows the blisters to prove it.

Your course of action: When she begins listing her suppertime sacrifices, interrupt with "And that is why you deserve to relax for the evening." All you can do is ask if she needs help -- if only to assure yourself that you tried. "She is obviously getting something she needs out of this, be it satisfaction or superiority," says Tiger.

Often heard saying: "Whatever you think is best."

The offense: Follows every shred of opinion with a question mark. Knows what she wants but tells you after the fact.

Your course of action: "This person is wounded because you haven"t been able to read her mind," says Greenwald. Her behavior is a subtle manipulative device that she is probably totally unaware of. Get past the after-the-fact guilt and ask her to be clear the next time. Say something along the lines of "If you let me know next year what kind of pie you prefer, I'll put it on the menu."

Often heard saying: "The doctor doesn't know what it is, but it itches like a mother...want to see?"

The offense: Passes around gory details like so many candied yams. Doesn't know what is appropriate table talk.

Your course of action: "Often this person makes many social blunders and believes people want to know what he has been through," Greenwald says. Gently change the subject. Tiger suggests offering a related topic, such as "I hear sciatica can be very uncomfortable -- especially when you're pregnant. Grace, when is your daughter-in-law due?"

The offense: Makes it known that nothing is right -- or as good as it was in December 1984. Complains about everything from the fork tines to the figgy pudding.

Your course of action: "Most malcontents are not a threat and don't require you to do anything but continue being your usual friendly and polite self," says Fox. They play the victim role as a way to get attention. Disregard their attempts to get you to share their foul mood, she advises.

Often heard saying: "Everyone knows you got the beauty and your brother got the brains."

The offense: Doesn't pick on people his own size. Hurts others' feelings.

Your course of action: The bully uses mockery as a way of connecting with others. Don't play his game -- he probably has an arsenal of experience dating back to his days of milk-money thievery. But do stand up for yourself, and don't back down. Fox suggests using humor to make light of his seriousness: "And you obviously got the charm."

RealSimple.com: 10 things to say to keep the peace

Often heard saying: "Got a bun in the oven yet?"

The offense: Annually asks when you are going to get a man, get married, get pregnant, or get a life.

Your course of action: The busybody wants to feel superior to you by making you feel insecure. In response to her nosy inquiries, ask politely why she is asking -- and smile, advises Fox. This usually embarrasses the busybody enough to make her drop the question. Sarcasm also works, says Tiger. Simply look aghast, pause, and reply, "Oh, my gosh, I forgot!" Then move on.

Often heard saying: "Just a second, dear -- I'm not finished making my point. As I was saying..."

The offense: Dominates the conversation. Doesn't let anyone get a word in edgewise.

Your course of action: This person finds himself fascinating, never mind what others think. "Seat him near those who will be least affected by his constant drivel -- children, for example," says Tiger. Steer the conversation away from topics he typically waxes poetic about and toward ones that somebody else is expert in.

Often heard saying: "That's not what I heard."

The offense: Spreads family "secrets" like butter on bread.

Your course of action: "Gossip is unavoidable and, for the most part, benign," says Fox. "It's just everyone's way of showing they're interested in other people." There's no need to scold guests for livening up the conversation with a few juicy details. If someone's gossip is extreme and mean-spirited, however, think about not inviting the infectious person next year, Greenwald says.

The offense: Goes to pieces whenever the family comes together.

Your course of action: Give this person a chance to vent before you all sit down to supper. Assure him that you know he is going through a difficult time, and say that you want to hear all about it, Covey suggests. Let him know you are free to listen anytime you're able to give him your full attention -- in other words, not between the soup and salad courses.

Often heard saying: "Kids, don't get too comfortable -- this is just a pit stop."

The offense: Hates everything. Doesn't get that whole "quality time" thing. Prefers the game on TV to the gathering in the next room.

Your course of action: Let him know he can RSVP with a no, "since I know how hard these kinds of get-togethers can be for you." If you want to spend time with him that day, try a gentle plea, like "I'd love to catch up with you -- how about turning off the game and going for a quick walk?" Specify an activity with a time limit.

RealSimple.com: How to disagree agreeably

The offense: Makes it tempting to switch to sparkling cider for the sake of a peaceful dinner.

Your course of action: Communicate ahead of time that drinking will be limited this year, Covey says. Ask specifically for this person's cooperation. If he insists on getting drunk, take him aside and ask that his drinking be done elsewhere. In this situation, you might try having someone with influence over him -- his wife, his father -- step in and negotiate. Most important, says Fox, make sure he gets home safely. Arrange for transportation if necessary.

Non sequiturs have their moments: They're invaluable as a not-so-subtle way to steer conversation away from the brink of a family brawl. Just remember that changing the subject is an art form, requiring balance and awareness.

"Be careful not to do it without reason or without letting the other person finish what he was trying to say," Sue Fox warns, or you risk being labeled the one who barely listens. Asking a question is usually effective -- other uncomfortable family members will probably jump at the chance to talk about something else. Some ideas:

• Ask if anyone is up for a movie after dinner, then list the ones you've been dying to see. Someone will surely volunteer a suggestion of his own, sparking further discussion, even if you never get around to going.

• Think of something that has happened to you in the last few months that you can announce to the table. Promotions, awards your kids have won, or recent home improvements, however small, are all fair game. (Don't tread into braggart territory, however.)

• Start talking about a relative who is not at the gathering. Nothing nasty -- just ask if anyone has news about that person.

• Comment on the food. Ask where the chef found the recipe or what kind of wine you're drinking.

• The last resort: Accidentally catapult a spoonful of peas across the table. "Everyone's eyes will be on you, instead of on the person who's being rude or inappropriate," Caroline Tiger says.