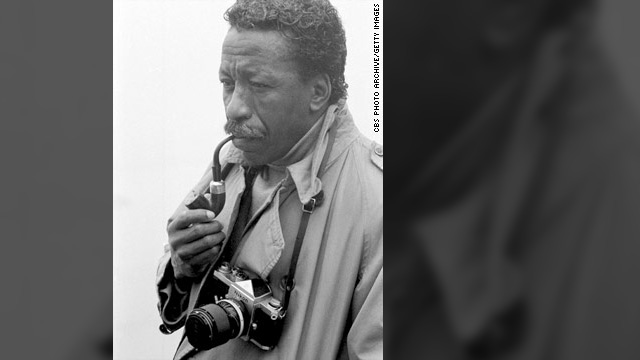 In preparation for this year's show, CNN asked Cooper for his thoughts about the event and who he admires.

CNN: Who is your personal hero?

Anderson Cooper: Growing up, I had someone who was sort of a mentor who was really a hero to me -- a man named Gordon Parks, who actually was quite famous. He was the first African-American photographer for Life magazine, first African-American to direct a major Hollywood picture ("The Learning Tree" in 1969). And he passed away just a few years ago, and he's somebody who still to this day I think of often.

CNN: Why do you think Gordon Parks was heroic?

And he felt something inside of him that pushed him to pick up a camera. And to start taking pictures. And then to get himself to be the first African-American photographer at Life magazine. And to take some of the pictures he did, and what he told us in the story of his pictures ... he told stories that Life magazine wasn't covering before. Malcolm X and the Nation of Islam. And gangs in Harlem. And Gordon could get access that other people couldn't get.

He wrote best-selling books. Directed films (including "Shaft" in 1971). He was truly a Renaissance man.

It's always very interesting to me why some people have that inner drive and that push forward. And he certainly did. And there was no reason for him to have it. He could have had every excuse in the book for not accomplishing something with his life, but he lived many lives and he accomplished things in all of those lives. And I think that he was a true hero.

Before I even knew what the word cool meant, I knew Gordon Parks was cool.
--CNN's Anderson Cooper

CNN: Sounds like Gordon Parks had quite an impact on you.

Cooper: I think he's the person who probably put the spark in me about reporting and about getting out there and seeing the world. He took photographs in Brazil and in the favellas in Rio and wrote books about one of the young men he met there. There were just so many stories that he would tell. And he was such a cool character. He was so incredibly dashing. He was the coolest guy. Before I even knew what the word cool meant, I knew Gordon Parks was cool.

CNN: This year will mark the fourth annual "CNN Heroes: An All-Star Tribute," which has become a Thanksgiving tradition on CNN. What do you think about the show?

Cooper: I just find it so moving that we are able to bring people from around the world to one place and to tell their stories and give them the attention that they so desperately need and deserve. And to see the impact that the recognition has on their lives and on their work, it is a great night. I think it's why we keep doing it.

There is something very special about this project. And it's a hard project, because it's not about stories in the headlines. So it's a hard thing to get people to pay attention to. But once they actually pay attention to it a little bit, read about it, watch the program -- you really see what an impact this has on people's lives. And the stories are just so incredible.

You cannot meet some of these CNN Heroes and not be inspired and not, kind of, look at your own life and think: "Well, what am I doing? What am I really contributing? And what more can I do?" And there's a lot more that all of us can do. Certainly myself included. I think I've learned from the CNN Heroes I've met so far, and I'm looking forward to hearing the stories of the next group that we encounter.

CNN: What do you think makes these stories, these people, so special?

Cooper: It's the kind of thing that you see in movies and you see in television shows and read about in books. It just doesn't seem real. But to know that there are people out there now, doing this ... who are giving up their lives in order to help others. And they are as surprised as anyone when they get the recognition.