Inside the science of how dogs think 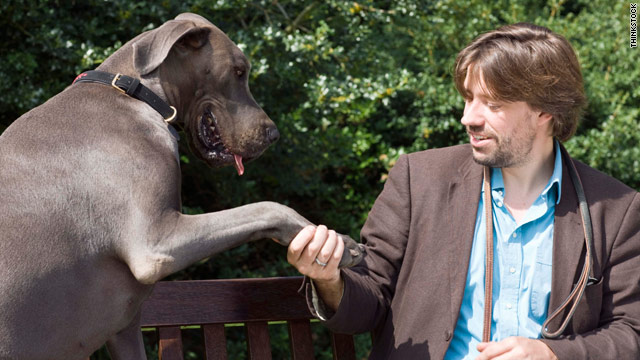 Editor's note: Learn some surprising things about what your dog might be thinking on AC360's series "Animal Intelligence" tonight, 10pm ET

Ever wonder what your dog is thinking as it gazes at you while you are barking commands?

Duke University's Canine Cognition Center in Durham, North Carolina, is one of the few labs in the country focused on how dogs think.

"We're excited about describing the psychology of our dogs," says professor Brian Hare, the lab's director. "Different dogs solve different problems differently. And what we want to understand is: What is it that either makes dogs remarkable as a species or what is it that constrains the ability of dogs to solve problems?"

To test the dogs' ability, Hare and a team of graduate students put dogs through a variety of games similar to those you might play with young children.

"We don't want to look at cute pet tricks. What we want to know is, what does the dog understand about its world?" Hare said.

Hare has been analyzing our four-legged friends for about 15 years. He says dogs have figured out how to read human behavior and human gestures better than any other species has, even chimpanzees.

"The way they think about their world is that people are superimportant and they can solve almost any problem if they rely on people," says Hare.

Children start relying on adults' gestures when they're about a year old. That's about the same age that dogs start to recognize and rely on humans, too, Hare says.

When both I and Hare tried to direct Hare's dog Tazzie to a cup that had a treat in it, Tazzie took his master's cue and went toward the cup. I was a stranger to Tazzie, so the dog didn't rely on my information.

"He's grown up with me," says Hare. "We do lots of stuff together. He's never met you before, so he's saying, look, if they're both telling me where to go, I'm going to trust the guy who I'm with all the time."

According to Hare, this proves dogs are complex social animals who understand they have different relationships with different people.

"They really narrow in and pay attention to you and they want to know what it is about the world that you can help them with," he says.

"They are a very different species and they think about the world differently than we do. And we need to figure out what are the constraints on how they solve problems, how is it that they think differently from us. And I think that we're going to be able to have a much, even richer relationship with dogs than we already do if we figure all that out," says Hare.

The professor says even though domestication has made dogs smarter, they are not perfect. Still, they're so smart, he says, that they can understand the principle of connectivity.

"They know they're connected on a leash and [dogs reason] 'Well, now I have to listen, because if I don't do what you say you can stop me. Where if I'm ... not on a leash, well, yeah, I know the command but I don't have to listen to you now,'" explains Hare.

And just like children, dogs also understand that if you turn your back, they can misbehave, especially after their owners have told them not to do something.

"Your dog takes the food you just told it not to take, and you're really upset because your dog disobeyed you, and you think that your dog is not obedient. Well, no, no, no, your dog was obedient but it realized that it could get away with it," says Hare.

At the end of the day, dogs may rely on humans, but they also use their skills to manipulate their owners and the world they live in. And even though dog owners like to think they're in command, the professor says it may actually be Fido who is really in charge.