The cool history of the Slurpee 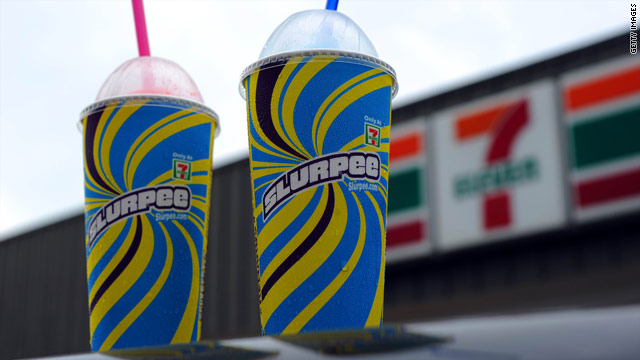 7-Eleven has run a promotion called "7-Election" since 2000. The results are unscientific, but surprisingly accurate.
STORY HIGHLIGHTS
RELATED TOPICS

(Mental Floss) -- When President Obama commented that the Republicans were standing around drinking Slurpees while the Democrats were busy creating real change in Washington, it caused quite a storm. Now that he's sitting down with the new Republican leadership this week, the so-called "Slurpee Summit" is the talk of the nation.

While most of us have had one of 7-Eleven's frozen concoctions, there's plenty more you probably don't know about this too cool drink.

Like so many great inventions, the Slurpee was created by accident. In the late-1950s, Omar Knedlik of Kansas City owned an old Dairy Queen whose machinery was always breaking down. When his soda fountain went out, he improvised by putting some bottles in the freezer to stay cool. However, when he popped the top, they were a little frozen and slushy. Folks loved them and started requesting "those pops that were in a little bit longer."

Realizing he had a surprise hit on his hands, Knedlik built a machine in the back room using the air conditioning unit from a car that would create slushy soda by combining and freezing a flavor mix, water, and carbon dioxide to make it fizz.

He held a "Name the Product" contest and the winning entry was "ICEE." With help from an engineering and manufacturing company in Dallas, the ICEE machine was redesigned and sold to a few convenience stores throughout the early 1960s.

But things really took off when, in 1965, 7-Eleven licensed the machine, but called the drink by a different name to make it unique for their stores. The name Slurpee was coined by Bob Stanford, a 7-Eleven ad agency director, when he described the sound made while sipping it through a straw.

Thanks to inventive advertising aimed at the growing youth market, Slurpees were an instant hit with the Woodstock generation. The cups featured colorful, almost psychedelic designs, and the flavors -- "Fulla Bulla," "For Adults Only," and "Kiss Me, You Fool" -- were edgy for the time.

7-Eleven ads were so popular that radio DJs were getting call-in requests for Slurpee commercials. One 1970 campaign featured a full-length song, "Dance the Slurp," written by one of the founding fathers of radio jingles, Tom Merriman. It was released on free, promotional 45 rpm records available in 7-Eleven stores.

The catchy little tune was a huge hit at the time and its influence even extended into the late-1990s, when turntablists Cut Chemist and DJ Shadow used the song as the inspiration for their 1999 album, Brainfreeze. Because so few copies of the giveaway album still exist, copies of "Dance the Slurp" regularly go for as much as $50 on eBay.

This is a tradition has continued today through promotional tie-ins with video games, professional wrestling, and extreme sports. In recent years, Slurpees have come in annual summer movie cups and flavors. Dating back to 2002, when the tie-in for "Men In Black II" was a blackberry drink, the promo cups and flavors have grown more and more elaborate (and popular).

The biggest hit so far has been the "Iron Man" franchise, with special collector's cups that feature 3-D character designs and a special helmet dome lid. They've been sold on eBay for three times what they originally sold for in the store.

However, for "The Simpson's" Movie in 2007, they went beyond just redesigned cups and wacky flavors. Select 7-Elevens were converted to look inside and out like Kwik-E-Marts, the 7-Eleven parody on the show, complete with "Squishees," the cartoon world's version of the Slurpee. The tie-in flavor that summer was Woo-Hoo Vanilla Blue, probably one of Homer's favorites.

You'd think the last thing Canadians would want is a frozen drink. But since 1999, Winnipeg has been crowned the Slurpee Capital of the World with more than 188,833 Slurpees sold there every month. With a population of just over 675,000 people, that means over a quarter of the population enjoys a Slurpee on a regular basis. The rest of Canada pales in comparison, selling only 179,900 Slurpees every month.

Detroit sells the most cups of any U.S. metro area, but the largest single Slurpee-selling store in the U.S. is the one in Kennewick, Washington, which locals have dubbed "The Slurpee Factory."

Happy Birthday to Us

Every year since 2002, on July 11 (that's 7/11, of course), the company celebrates its birthday with "7-Eleven Day." Only in this case, the customers get the present -- free 7.11-ounce Slurpees for the first 1,000 people through the door of participating stores. It's estimated that the company gives away over 5,000,000 Slurpees to happy customers on this one day.

But Is it Kosher?

In case you were wondering, almost all Slurpee flavors are considered kosher pareve (food that is neither meat nor dairy). There are a few, such as Diet Pepsi and the Jolly Rancher mixes, that are considered kosher dairy (due to the chemical tagatose in the artificial sweetener), while others, like the popular Piña Colada drink, are not certified at all. Some 7-Eleven stores get the machines themselves certified kosher, which the store owners use as a selling point for their Jewish customers.

As any regular Slurpee fan knows, one of the best parts about the self-serve drink is being able to mix flavors from different dispensers. According to Slurpee market research, 41 percent of slurpers never mix their flavors, 37 percent always do, and 21 percent will mix every once in a while.

The most popular combinations use the Coke flavor as a base, with a fruity mix on top -- often Wild Cherry or Piña Colada. But of course for the really daring, there's always the "Suicide Slurpee" -- mixing a little bit of every flavor from the row of dispensers.

Most of these and other wild and wacky flavors sound like they could come from a factory run by a guy named Wonka. But in fact, most are the invention of the mad scientists at the Dr Pepper Snapple Labs in Plano, Texas. (Yes, they make Snapple and Dr Pepper flavors, too).

To create a new Slurpee flavor requires a savvy combination of science, senses, and marketing. One of their biggest challenges is keeping up on flavor trends, such as knowing that exotic fruits like acai, yumberry, litchi, and dragon fruit are becoming popular with consumers; whereas previously hot flavors, like mango and pomegranate, are now commonplace.

Of course just because it's popular doesn't necessarily mean it will taste good. They go through numerous rounds of product testing until they get the flavor just right. But once they've locked down the taste, they have to consider the name, the color, and the consistency of the mix when it's cooled to the standard 28° Fahrenheit.

The process can take weeks or even months to go from concept to your corner store.

Purple for the People

For the upcoming Slurpee Summit, 7-Eleven has offered to provide symbolic Slurpees -- red for Republican, blue for Democrat, and a new flavor, "Purple for the People," which combines the two colors. So far, their offer has not been accepted, but some in the White House say the drinks could still make an appearance.

Regardless, the pending sit-down has been reason enough for 7-Eleven to launch a massive promotional campaign in the form of the Slurpee Unity Tour, a cross-country trek from 7-Eleven's Dallas headquarters to the nation's capital, giving away free samples of their new purple drink to Slurpee fans along the way.

This isn't the first time 7-Eleven has gone political. Since the 2000 Presidential election, the company has run a promotion called "7-Election," where customers vote by purchasing special red or blue coffee cups printed with each candidate's name. The cups are scanned at check-out and automatically entered in this unscientific, but surprisingly accurate poll -- in 2000 and 2004, the number of coffee cup votes and the number of actual popular votes for both candidates was only off by 1 or 2 percentage points.

While 2008's 7-Elections results were still correct, they gave the election to Obama by a landslide -- 60 percent to 40 percent -- when the margin was really only about 7 percent.