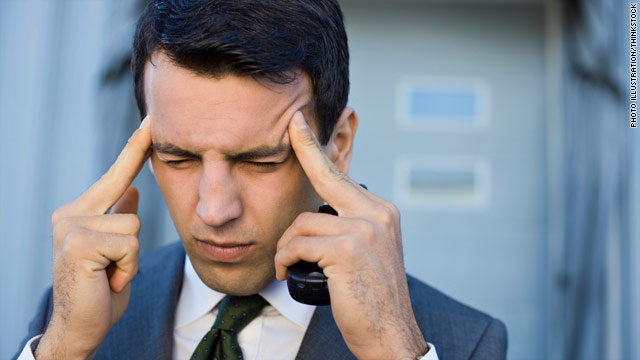 If you don't get paid sick days, switch shifts with a coworker or ask for a substitute duty if you fall ill.
STORY HIGHLIGHTS
RELATED TOPICS

(CareerBuilder.com) -- A group of leaders in the food service industry gathered in Washington, D.C., recently to discuss the alarming findings of a new survey. The study, conducted by Restaurant Opportunities Centers United -- a national organization that represents and supports restaurant workers -- found that two-thirds of restaurant workers go to work when sick.

The study sheds light on some serious underlying issues in the food service industry: Nearly 90 percent of workers reported they get no paid sick days and 60 percent said they did not receive any form of health insurance. But the study also highlights an obvious problem for diners who eat the food handled by sick workers.

June Lindsey, a Detroit woman with more than 30 years of experience in the food service industry, knows a lot about going in to work sick. She shared the following story in the study:

"[One day] I had a really bad cold. My nose was running, I was sneezing, [and] I had a bad cough and a fever. I could not call in sick because no work meant no money and I couldn't afford it at that time. My kids were very young, so I went to work to see if I can make it through the day.

CareerBuilder.com: Have an incompetent boss? You're not alone

"Halfway through the day, the sneezing, coughing and runny nose got worse. I asked the manager, 'I am really sick and need to go because I could make others sick and I am dealing with food.' She laughed and told me, 'Try not to cough, then.' So I had to work that day sick, and who knows how many customers I got sick because I couldn't go to the back and leave the counter to wash my hands after every sneeze or nose wipe. Later on, all of us got sick one by one, and all this came from another worker that came to work sick like me, but was not allowed to leave work."

While food service is the most recent industry to address the problem, it's not exclusively theirs. According to the website for MomsRising, a group that pushes for reform on issues like maternity leave, fair wages and paid family illness days, 55 percent of workers in the retail industry and 48 percent of workers employed in the general private sector don't receive paid sick days.

If you come in sick, there's a good chance your co-workers and customers will get sick, too -- and in some cases, passing on your illness can cause potentially life-threatening situations.

Take the case of Amy, for example. As the mother of a young son who is being treated for a blood disease -- his recovery from which depends on his avoidance of illness -- Amy pays vigilant attention to those who enter her son's room at the renowned children's hospital where he is staying.

Recently, the poor health of one of the hospital's staff members compromised the well-being of Amy's son: "On Saturday, as I woke up, I noticed that our nurse was sick," she says. "No one is supposed to be allowed on our floor if they are sick and definitely not in our rooms. This is a nurse whom we really like and who has been with us from the beginning.

"When I wouldn't allow him back in the room, he explained that the hospital does have a policy that the nurses have to call in if they are sick. Unfortunately, the hospital has another policy that causes nurses to be written up if they call in sick. It's a Catch-22 that puts kids at risk." Amy and her family are trying to get the hospital policy changed, since she says it caused "a good nurse to make a poor choice."

While Amy's incident may seem like it would be an isolated one in the health care field, a recent study by the Journal of the American Medical Association says otherwise. This summer, the AMA published the findings of a survey of 537 medical residents from around the country, in which 57 percent of residents said they'd worked while sick, the Kansas City Star reports.

With the advent of flu season, it can be tough to know what to do when you know you are too sick to go to work, but are worried about the repercussions of skipping a day. Here are a few ideas to help you find a better alternative to working while you're sick:

CareerBuilder.com: How to self-promote without being obnoxious

1. Switch shifts: If you work in a restaurant, hospital or retail environment where workers are scheduled in shifts, try switching hours with a co-worker. Create a list of all your co-workers' phone numbers and keep it at home. That way, if you're feeling too sick to work, you can call a colleague and ask if she can cover your shift. Just make sure that you offer to cover one of hers in return, or to repay the favor when she isn't feeling well.

2. Get a doctor's note: Though asking your doctor for a note may make you feel like you're back in the fifth grade, doing so will lessen your chances of being reprimanded -- and provide you proof of your illness should your employer think you were playing hooky.

3. Work from home: If you have a desk job or another occupation that doesn't necessarily require your physical presence, working from home can be a good alternative for those who don't want to -- or can't -- take a sick day. It will prevent you from spreading your condition to colleagues and clients, and will also allow you to get your work done while you recuperate.

4. Check out the legalities: While the Healthy Families Act -- which would require employers to provide employees with one hour of paid sick leave for every 30 hours worked -- has recently been reintroduced in Congress, it has yet to pass. In the meantime, many employers do have guidelines when it comes to working while sick, which means you might have the right to -- or might be required to -- take the day off if you're not feeling well. Most large employers, for instance, must legally allow workers to take up to 12 weeks of unpaid sick leave per year, under the Family and Medical Leave Act.

5. Ask for a substitute duty: If you think you must go to work while sick, talk to your employer about alternative duties. Instead of working directly with customers at a retail store, for example, ask if you can work in the stockroom instead. If you work at a hospital, ask to cover a floor that won't put you in contact with patients that have compromised immune systems.