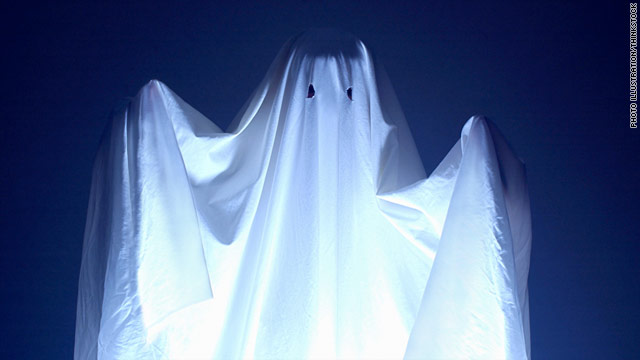 Apparations are often caused by strange lighting or shadow effects combined with belief in the paranormal.
STORY HIGHLIGHTS
RELATED TOPICS

(RealSimple.com) -- Odd noises? Creepy voices? Scary visions? Here's a hint at what might be behind them.

Doors opening spontaneously
What it could be...

Your door is breathing. No, not the come-alive-holding-a-butcher-knife breathing. "Most claims of this type of paranormal activity in the northern United States are made between the months of October and March," says Grant Wilson, cohost with Jason Hawes of Syfy's "Ghost Hunters".

Here's why: "In the winter, the heating system evaporates moisture in the wood, making doors contract and causing them to become unlatched."

A small draft. When a door opens or closes, it can raise or lower indoor air pressure, causing another door to move.

Bad hardware. "Not long ago, we went to a lady's house where, during really humid days, her door's latch would be a hair off, so that it didn't fully close," says Wilson. "On particularly windy days, the door would open by itself."

Sudden, drastic temperature changes
What it could be...

Mood lighting reminiscent of M. Night Shyamalan. "Different lighting levels or strong contrasts -- a bright light in one part of the room and a dark corner in another -- can play tricks on your mind," says James Houran, Ph.D., a research psychologist in Dallas and a coeditor of Hauntings and Poltergeists: Multidisciplinary Perspectives.

This uncertainty (like not knowing what's lurking in that dark corner) can make the room seem colder. Chill equals ghost, and suddenly you think you're Haley Joel Osment.

Poor insulation. "Many times," says Houran, 'the temperature-change phenomenon elicits a big Homer Simpson 'D'oh!' when it turns out to be lousy insulation that results in cold drafts."

Voices
What it could be...

You're tired. Lack of sleep, especially REM sleep, can make you think you're hearing things. "A brain lacking sleep or under emotional stress is like a brain on drugs," says Houran.

"When I used to stay up all night in college cramming for exams, phantom voices often plagued me. Proper nutrition and healthy sleep the next day exorcized the spirits."

The electronics are talking back. Radio waves can interfere with audio devices. That means you could be watching "The Price Is Right" when a CB radio interjects, "Papa Bear to Baby Bear. Do you copy?"

Thankfully, since this applies only to audio gadgets, you won't hear your toaster play "Fly Me to the Moon" or your blender criticize your banana daiquiris.

Your aquarium. Wilson and Hawes once cracked a case in Connecticut in which home owners were positive they heard voices. The team traced the sounds to a fish tank -- but the guppies were not plotting a great escape.

"The water filter was releasing air, and it sounded just like voices," says Hawes.

Banging, scratching, footsteps, and rat-a-tat-tat sounds
What it could be...

The neighbors. Do you have any idea what's going on over there? "We had one client who claimed she heard ghosts banging on her wall," says Hawes.

"It ended up being the guy in the next town house over bringing girls home at one in the morning."

Your home is critter party central. "We visited a house where a woman claimed her cat would freak out at one spot on a wall," says Hawes. "Turned out there was a chipmunk living in there."

Your heating or cooling system. These often cause floors and walls to warm up or cool down unevenly. Picture hot air traveling through a duct under your hallway floor. The section of duct closest to the furnace will warm up slightly faster than the part a few feet farther along the hall. As that first area of duct warms, the floor above it might expand slightly, making a creak. Then the second section of duct warms, making another creak, and so on. The result? Creepy footstep sounds.

Your pipes. If your radiator has air in its supply or return pipes (it shouldn't, but that can happen, especially after plumbing work), fluctuations in water pressure can make a rat-a-tat-tat sound.

Apparitions
What it could be...

Electromagnetic fields, or EMFs. An EMF is a low-frequency radiation that can be emitted by power lines, cell phones, earthquake fault lines, appliances, electrical outlets, and the sun. Whether or not EMFs have an effect on people is controversial, but studies have shown they may be able to create hallucinations by interfering with the brain's electrical patterns.

One woman told Wilson and Hawes that she was being haunted in her bedroom. When they whipped out their EMF meter, they found "her bed was right next to one of those old, flip number-style motorized alarm clocks, which made the meter react," says Wilson.

"We were able to solve her 'haunting' by replacing her clock."

Yikes! An actual ghost? "When we recently investigated a penitentiary in Pennsylvania, we had a presence run right at our camera," says Hawes, who uses an infrared video camera to capture heat sources that can't be seen with the naked eye. "I honestly believe that we caught some sort of apparition."

Houran is dubious: "Whenever I've investigated ghosts that were reportedly caught on tape via a specialized medium, such as infrared, it has always turned out to be a simple recipe: one part lighting and shadow effects mixed together with strong suggestion and a big heap of belief in the paranormal."

A problem even worse than a ghost. "Grant and I worked a case in which a woman was seeing strange things," says Hawes.

"It turned out she had cataracts. We had another client who mixed a new prescription with an old prescription and wound up creating a hallucinogenic drug."

Moving objects
What it could be...

Yikes! An actual ghost? "In one instance, I left my flip-flops at the bottom of the stairs, and one of them suddenly disappeared," says Hawes. "It showed up in a room nobody had been in, smack-dab in the middle of the floor.

Another time there was an apple that kept appearing in different locations. It was sitting on a table in the kitchen, and I took a bite out of it to mark it. Half an hour later, we found it on the heater in the basement." Whoa! Spooky.

What's Houran's take? "In my experience," he says, "moving objects always turn out to be the result of outright trickery, a tired person with a poor memory about where things were left, or animal antics."

The 21st century. People who live in close proximity to others often turn on the neighbors' gadgets or switch their TV channels (right at the best part) with their own remote controls. And batteries dying a slow death can make devices go bonkers.

Pure physics. "We had a woman who claimed she could put a glass of water on a table, come back 20 minutes later, and the glass would have slid three feet," says Hawes. "We taped it happening." The reason? Condensation from the glass formed a puddle under it, the table was slanted just enough, and the glass skated over the water, an example of an effect called fluid-film lubrication.

Cats, dogs, or cars. Wilson and Hawes agree with Houran that most moving objects are the result of vibrations from passing vehicles or naughty pets making off with your socks. "We investigated a home in New York City in which a woodstove kept moving out of place," says Wilson. "It had nothing to do with ghosts but everything to do with the fact that a subway ran right under the building."