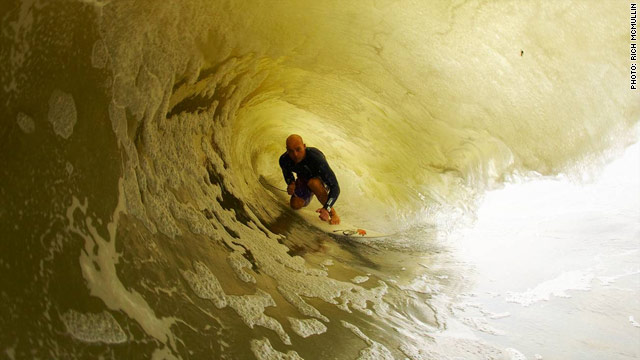 (CNN) -- The cold has cleared the sunbathing crowds from New Jersey's beaches, yet the freezing temperatures won't keep some surfers out of the water.

They have grown up with "ice cream headaches" -- the painful ache when you eat something cold too fast -- they are the surfers from New Jersey.

"I've had times when icicles form in my hair," says surfer Andrew Gesler.

Even the smallest waves will have the hardcore surfer walking over the snow-covered sand to take advantage of the power of the chilly Atlantic Ocean. For years, professional surfer and cancer survivor Dean Randazzo has been among those in the frigid waters, wearing a full wet suit, hoodie, gloves and booties.

"You just deal with your surroundings," says Randazzo, "if you love something so much you just keep doing it."

Randazzo kept surfing year-round and it paid off in 1990 when he started making a living off the ocean. Early in his career at contests around the world, he would often be asked, "Are there waves in Jersey?"

As filmmaker Alex DePhillipo shows in his newly released surfing documentary "Dark Fall", not only is the surf good in New Jersey, but there are a lot of good surfers in the state.

"He has absolutely paved the way for any surfer that wants to become a professional from New Jersey," says DePhillipo.

Randazzo now just started his own line of surfboards.

Gesler -- the narrator of "Dark Fall" and a professional surfer -- concurs, "Randazzo is our big brother, coming from New Jersey you don't have a lot of people that have made the impression that Dean has."

It was the impression of a surfer and a state that took years for Randazzo to change. The money to be made in surfing comes from sponsors, appearances and editorial photographs. Only a few in the profession make enough money in surf contests to support themselves.

"I had to win money," recalls Randazzo, "there were places on the tour when I wasn't eating if I didn't win money in that contest, or I didn't have a plane ticket home."

Winning money meant winning contests and in 1996 Randazzo became just one of 44 surfers to qualify for the World Championship Tour.

"Somehow I managed to do that with no sponsorship," says Randazzo, then dryly adding the word "barely."

He also managed to put credibility into the New Jersey surf scene. "Dean has paved the way," DePhillipo says, "There's never been a surfer from New Jersey or the Northeast that's made the World Tour."

The success Randazzo has enjoyed is no surprise when you learn a bit more about this Jersey boy. Fighting to be respected in the surf scene was nothing compared to the four battles Randazzo fought and won against cancer.

It was in 2001 when he was first diagnosed with Hodgkin's Lymphoma, a cancer of the lymph nodes.

"Everyone has their hometown hero, but in this case Dean's just like a state hero," says DePhillipo, "he's even motivation for people who aren't from Jersey because of his fights, his battles."

When Randazzo isn't in the water he uses his celebrity status along with the sport he loves to raise money for the Dan Randazzo Cancer Foundation.

Currently residing in California, Randazzo frequently returns to New Jersey. Not forgetting where he came from, the foundation sponsors an annual event called "Surf for a Cause" in his hometown of Margate.

"It's just one of those events that everybody wants to support even if they're not surfing, they want to support Dean," says Stacey Marchel, a Jersey surfer and the owner of Stacey's Surf Camp.

As the film "Dark Fall" points out, it is because of Randazzo that being a surfer from New Jersey is no longer, as he puts it, "like trying to be a professional snowboarder and growing up in Miami Beach."

Florida doesn't have snow but as captured in this new surf film, New Jersey definitely has waves. The state also experiences winter and that freezing season is what separates the surfing fraud from the fanatic. But as Randazzo or actually any Jersey surfer will tell you, the passion doesn't waiver with the weather.