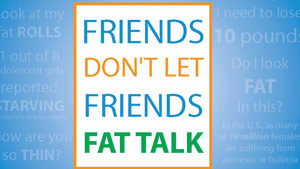 The campaign is aimed at stopping people from saying negative things about their bodies.

(CNN) -- Attention, please! Did you know that you should not talk about "fat" this week.

That includes phrases like:
• Does this make my butt look big?
• I look so bloated.
• I'm still trying to lose weight after the baby.
• You look big-boned in that swimsuit.

"I believe all women deserve to feel good about themselves. We need to prevent negative body images and get away from this obsession over the thin ideal. We should focus on our health instead of our size and weight," says Stacy Nadeau, a former model for Dove soap's Campaign for Real Beauty.

Nadeau is the official spokeswoman for Fat Talk Free Week. The fraternity Tri Delta and The Center for Living, Learning and Leading have teamed up with partners and sponsors to raise public awareness about the campaign.

Nadeau is traveling to college campuses and promoting the end of fat talk.

She has been busy this week, writing on the campaign's Facebook page and participating in events like writing fat phrases on pieces of paper, then crumpling them up and tossing them in the air. Another activity is compiling a list of prominent women from history who did something significant that had nothing to do with their looks.

"I think this week is important for people to be aware of because it has unfortunately become a norm to bash our bodies and talk awful about ourselves. This week is a great week to encourage women to stop talking fat talk," Nadeau said.

Since it began three years ago, Fat Talk Free Week has gained sponsors and partners like The Academy for Eating Disorders.

And as the active participants increase, so has media attention. Rosie O'Donnell addressed the issues on Sirius Radio.

"For people who have been overweight for a long part of their life, it's part of the vernacular -- you always say, 'I look so fat,' or 'I'm so fat.' You berate yourself. It's just part of the culture," O'Donnell said.

Twenty-five million Americans suffer from anorexia, bulimia and binge eating disorders, According to Jeff Cannon at the National Eating Disorders Association. Ninety percent of those sufferers are women.

The research used to create Fat Talk Free Week is based on the understanding of psychological dissonance. "We don't like it when our beliefs and actions don't match up," Becker explained. "So by having people speak and act against this ideal thin female beauty we create an uncomfortable psychological state."

This is the third year the one-week public awareness program has been in effect and according to Tri Delta's Director of Education Initiatives, Sarah Williamson, the viral videos and social media's expansion has greatly increased knowledge of the campaign. One YouTube video from 2008 has been viewed by over 140,000 people. The footage reports, "54 percent of women would rather be hit by a truck than be fat" and "If mannequins were women they would be too thin to bear children."