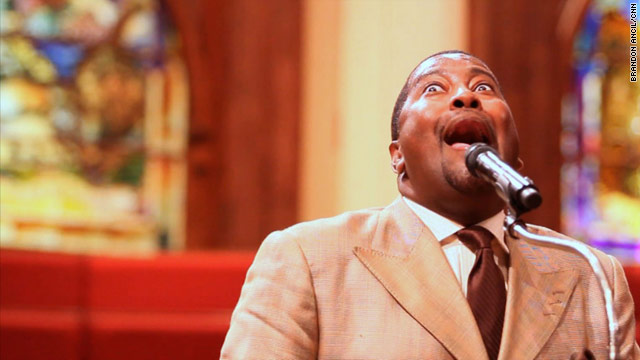 Preacher 'whoops' it up at the pulpit
STORY HIGHLIGHTS

CNN's Soledad O'Brien looks at how some are fighting debt from the pulpit in "Almighty Debt: A Black in America Special," Sunday at 8 p.m. ET.

(CNN) -- The Rev. E. Dewey Smith Jr. bangs on the pulpit with his fist. He shuts his eyes and moans. Then a high-pitched sound rises from his throat like the wail of a boiling tea-kettle.

"I wish you'd take the brakes off and let me preach," he tells his congregation during his Sunday morning sermon.

Rows of parishioners stand to shout. One woman in a satiny blue dress jumps up and down like she's on a pogo stick. A baby starts to cry.

Smith had already given his congregation the "meat" of his message: scriptural references, archaeological asides, modern application -- all the fancy stuff he learned in seminary. Now he was about to give them the gravy.

It was the time to "whoop."

"One Tuesday morning, I heard the voice of Jesus saying, 'C'mon unto me and rest," Smith shouts as he punctuates his delivery with a series of guttural gasps and shrieks backed up by an organist's riffs. "But can I tell you what I did? I came to Jesus, just as I was. And I found in him joy in sorrow. Somebody shout yes. Yeessssss!"

To whoop or not whoop?

Smith may have sounded like he was screaming. But those who grew up in the African-American church know better. He was whooping. He was practicing an art form that's divided the black church since slavery.

Whooping is a celebratory style of black preaching that pastors typically use to close a sermon. Some church scholars compare it to opera; it's that moment the sermon segues into song.

Whooping preachers aim "to wreck" a congregation by making people feel the sermon, not just hear it, says the Rev. Henry Mitchell, a scholar who identified the link between whooping and African oral traditions.

"The old folks used to say, 'If you ain't felt nothing, you ain't got nothing,''' Mitchell says.

Yet the black church has long been ambivalent about whooping. Some scholars say contemporary black churches are abandoning whooping because they think it's crass. But more white preachers are discovering it through YouTube and by sharing the pulpit with black preachers.

The most persistent debate over whooping revolves around its legitimacy. Is it fair to call it an art form? What's so hard about a preacher screaming and sweating in the pulpit?

Those are the critics who say whoopers are minstrels, not ministers.

"The hairs on the back of my neck stand up when people say that," says the Rev. Martha Simmons, a whooping preacher and scholar. "It is a genuine art form."

Simmons says the best whoopers use their voices like instruments. They're following rules of rhythm, tone and melody. All good whoopers have some "music" in their throat, says Simmons, editor of "Preaching with Sacred Fire," an anthology of black sermons dating back to 1750.

If you think whooping is easy, Simmons says, try listening to a preacher who can't whoop but tries to anyway.

"It's like listening to someone try to sing opera who is not an opera singer," she says. "It's a train wreck."

Earning the right to whoop

Smith, senior pastor of Greater Travelers Rest Baptist Church in Atlanta, Georgia, says a good whooper has to preach a solid message before they whoop.

Tell me about somebody who is having a revival, and I will tell you where the whoopers are.
--Rev. Martha Simmons, black preaching scholar
RELATED TOPICS

"When I was in seminary, I was taught that you had to earn the right to whoop," Smith says. "What earns you the right is solid exegesis, scholarship, being able to apply the message."

Those whooping legends that blended theology with "whoopology" are people like the Rev. Caesar Arthur Walker Clark Sr., a diminutive man with a powerful voice that could sound like God's trombone.

Contemporary whooping legends include the Rev. Charles Adams, dubbed the "Harvard Hooper" because of his Ivy League education, and the Rev. Jasper Williams, who teaches "whoopology" classes through a DVD series.

But the Rev. C.L. Franklin, the father of singer Aretha Franklin, is widely considered the greatest whooper. Many of Franklin's sermons, like the classic, "The Eagle Stirreth Her Nest," and "Dry Bones in the Valley," were sold as popular records during his lifetime.

Whoopers not only sound different; they preach different, says Mitchell, the preaching scholar and author of "Black Preaching: The Recovery of a Powerful Art."

Most whoopers shun abstractions. They preach with stories, parables and metaphors -- like Jesus did.

"When Jesus wanted people to be compassionate, he didn't say 'Be yea compassionate,''' Mitchell says. "He told the story of the Good Samaritan."

Mitchell says European culture tends to distrust emotion. That instinct, he says, goes as far back as the Greeks who frowned upon the exuberant worship of pagan religions.

Scholars quibble over the origin of whooping.

Most trace it back to West Africa griots, the dramatic storytellers who preserved a people's oral tradition. Some trace it to the "tonal" nature of African languages, the drums of Africa; the need for the slave preacher to rouse the battered spirits of enslaved Africans.

"It's in the DNA of our people," Smith says. "When people were beaten and bruised, the slave preacher, with the intonation of the voice, was able to lift the spirits of the people."

If whooping is the soundtrack for the black church experience, some want to change the record.

Smith, the Atlanta pastor, says some of the discomfort blacks have with whooping springs from "self-hate." They're ashamed of an authentic expression of black culture.

He cited E. Franklin Frazier, the black sociologist who wrote "The Black Bourgeoisie."

"Frazier wrote that the higher we climb on that social and economic ladder, the less intense and heartfelt our worship becomes," Smith says.

Some of the criticism of whoopers, though, is warranted, even some whoopers will acknowledge.

The Rev. Patrick Clayborn, an assistant professor of homiletics at Methodist Theological School in Ohio, says some preachers treat whooping as mere entertainment.

Clayborn says he was once accompanying his brother-in-law, a church organist, to a Sunday morning service when the visiting preacher slipped in a quiet request before the service.

"He said make sure you're in D-flat when I get to the end of my sermon," Clayborn recalls.

Teresa L. Fry Brown, director of black church studies at Emory University in Atlanta, says people use to scoff at the itinerant "jackleg" preachers in the 1940s and 1950s who whooped their way through empty sermons, making up texts.

Preachers who give their congregation a whoop but no substance leave their parishioners with nothing to get them through the week, Brown says.

"They deliver diabetic sermons. You have a shot of insulin, but you have to come back later," Brown says. "It's like a candy high. They never look at the text; never any substance. All they give you is sounds."

Another debate in the whooping world revolves around race: Can white preachers whoop?

Some black preachers say yes, and point to white pastors such as the Rev. Paula White.

Featured at many of Bishop T.D. Jakes' events, White says she doesn't try to whoop. It's simply an "authentic" expression of her preaching passion.

Yet Clayborn, the homiletics professor in Ohio, says the fuel for the whoop grows out of the black perspective, the experience of being among "the least, the last and lost."

"When I see a white preacher do it, it feels like they went and learned it, just like a parrot can imitate the human voice," he says. "They're like spiritual parrots."

Despite criticism, whopping is still popular, says Simmon, editor of "Sacred Fire." Preachers who don't practice whooping will call whoopers when they want to pack their churches for special events.

"Tell me about somebody who is having a revival," she says, "and I will tell you where the whoopers are."

No matter how sophisticated they get, whooping still speaks to black folks, Mitchell says.

One of Mitchell's preaching students who earned all sorts of advanced degrees had something odd happen to her after a family tragedy.

"She was preaching one morning and, before she knew anything, she started whooping and the place went crazy," Mitchell says. ""She didn't know she had it in her."

Simmons wouldn't be surprised by such a story. Some people may look down on it, but many black people still respect the power of the whoop.

"There's a sense of home in it," she says. "If you're a black person that hasn't been acculturated away from it, you say, 'This is us.' '