Trading cards profile a geek a week for an entire year

(CNN) -- When most people think of "Weird Al" Yankovic, the phrase "devourer of worlds" usually doesn't leap to mind.

And yet, that's exactly how Len Peralta depicted him, and Yankovic says he got it right.

"Len's extremely talented. I think that he captured my inner essence as the devourer of worlds. He kind of brought that to light, which I'm very thankful for," Yankovic said.

Peralta, a graphic artist from Cleveland, Ohio, is using his talent to complete the "Geek A Week" project: a compilation of 52 online trading cards featuring successful geeks and nerds. He's issuing one a week for an entire year; they can be found on geekaweek.net.

He contacts heroes of the geek and nerd community, interviews them and then designs the front and back of a trading card. (He gets help with the text from collaborators Paul & Storm.)

The geek celebrities who answer the Geek A Week call get Peralta's special treatment: He attributes superpowers or alter egos to the people he profiles, based on their interviews.

"He did incorporate some food into the image, and I've been trying to live down my food obsession ever since 'Eat It,' but I'm very happy with the card, and I think he did a great job," Yankovic said, referring to his famous parody of the Michael Jackson song "Beat It."

The work is usually a collaboration. Actor Wil Wheaton wanted to experiment with duality on his Geek A Week card, so Peralta drew him as an evil twin, Peralta said.

Some celebrities, like Adam Savage (of "MythBusters" fame), aren't completely comfortable with the first round of drawings.

"I thought his first illustration of me was a little too harsh and a little too evil and didn't quite look like me. So I ended up with my laptop and my webcam, posing with the very mask that I'm holding in the card, so that he could have a better drawing reference," Savage said.

The resulting trading cards are colorful, artistic and as informative as any Magic: The Gathering, Garbage Pail Kids, "Battlestar Galactica" or "Star Wars" trading card.

"Trading cards is a really good idea. There should be something like this for every industry, like Wall Street ... or Congress," Trace Beaulieu said.

Beaulieu helped create "Mystery Science Theater 3000" (he also was the voice of Crow T. Robot in the 1990s television show) and is featured on Geek A Week with his current wise-cracking movie critiquing troupe, Cinematic Titanic.

Beaulieu and Peralta were working together on another project, the recently published book "Silly Rhymes for Belligerent Children," when Peralta mentioned his idea for Geek A Week. Consequently, Beaulieu played into Peralta's quest for contacting celebrity nerds. 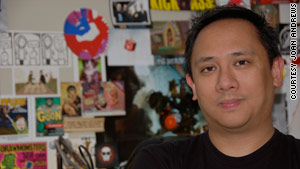 Geek A Week artist and creator Len Peralta at home in his studio.

Yankovic loved the idea of Geek A Week and was eager to help out a fellow nerd. He said the format of trading cards was a perfect platform for nerdy information.

"Collecting anything is really part of nerd DNA. Collecting and processing data, in and of itself, is nerd nirvana. 'Nerdvana,' " said Yankovic, who considers himself to be generally a nerd but a geek about some things.

"A project about geek heroes, I think, is one way that people from that subculture can feel validated. They realize that there are more people like them, and here are these successful ones, and perhaps that will inspire them to greater achievement."

"Being a geek is all about learning the inventories of things. Whether it's instantiations of C++ or esoteric algorithms for programming or characters from 'Star Wars,' geek culture is really defined by esoteric inventories."

Peralta got in touch with Savage through mutual friends Paul & Storm.

"It's exactly the kind of innovative ambition that's awesome when you see someone do it. Len actually reached out to all the people that he's ever admired in the geeksphere and has managed to spend time interviewing them all," Savage said.

What's a nerd?
A nerd is somebody that would be intelligent perhaps to the point of being a bit socially awkward. -- "Weird Al" Yankovic

In the Venn diagram [of nerds and geeks], I feel the two circles overlap more than they do not. ... I think the nerds tend to be a little more socially inept. -- Adam Savage

A nerd has big glasses and is in the library all the time and is probably really smart and is therefore a threat to the rest of us. -- Trace Beaulieu

"Nerd" is more exclusive. People who are more snarky would be classified as nerds. -- Felicia Day

Actress Felicia Day, mastermind of "The Guild" and known for her turn as Penny in 2008's "Dr. Horrible's Sing-Along Blog," was approached to be part of Geek A Week after her friends Jonathan Coulton and Wheaton re-tweeted their appearances in the deck.

"When he asked me what I wanted to do, I was like, 'Well, I really just want to be in space, or I want to be in a sci-fi setting.' The fact that he put me in one of the best video games of all time and as such an iconic figure -- I think he paired me with just the right thing to make me excited to see myself," Day said.

Peralta admits that Day's trading card is one of his favorites. On it he references the Valve Corp. game "Portal."

Thanks to his connections, Peralta has other big names in his Geek A Week stack, like Apple co-founder Steve Wozniak and filmmaker Kevin Smith, but he also includes plenty of geeks whom the general public might not know about.

What's a geek?
A geek is someone who is not necessarily intelligent. Usually they are, but they are savant-like experts in a particular subject. -- "Weird Al" Yankovic

Geek, to me, is not about being socially awkward but having passion. Geeks tend to be very, very passionate about one particular thing. -- Len Peralta

The cool thing about the word "geek" is that it's inclusive. Whatever you're really passionate about, you can label yourself as a geek, even if it's not one of the more nerdy things to like. -- Felicia Day

According to Yankovic, a man who has made a career out of creating entertainment that's appreciated by nerds and geeks, Peralta's devotion makes his product more compelling.

"If a geek wasn't behind Geek A Week, I think you'd know. It would feel inauthentic. When I did 'White and Nerdy,' I think why it struck such a response with fans is that they knew I walk the walk. I wasn't singing about a culture I was unfamiliar with, I was basically singing about my life," Yankovic said, referring to another song parody.

Fans of Peralta's project and the heroes he's profiling are sure to stick with it for all 52 weeks. In addition to the cards, the Geek A Week website includes podcasts of Peralta's interviews that give fans further insight about their heroes.

As for spoilers about whose cards fans can expect to see in the coming weeks, Peralta was generally mum but very excited to share the fact that he recently interviewed author Neil Gaiman.

The Geek A Week alums have their own hopes for who might show up on the trading cards:

"Weird Al" Yankovic (Geek A Week's "Comedic songster/Devourer of worlds"): If you're talking about blue-skying it, I think probably Stephen Hawking would be a natural choice. Personally, I don't think they would classify as nerds themselves, but I think icons to nerds of my generation [are] Monty Python. That's sort of a right of passage for a nerd is to be able to recite "Holy Grail" word for word.

Adam Savage (Geek A Week's "Mythbuster/Jack Lint"): I would love to see a Guillermo Del Toro Geek A Week card. I think Guillermo is a dyed-in-the-wool geek. It just occurred to me, I know Guillermo. I think I'm going to try to hook him up with Len.

Trace Beaulieu (One of Geek A Week's "Master riffers/Monster hunters"): I don't know if Steve Martin is a nerd or a geek. ... He's an enigma.

And what about the possibility of Geek A Week becoming honest to goodness, hard-copy trading cards?

"I get two or three requests a day to make hard copies. I'd love to. They lend themselves to it perfectly. Now, it's just a question of how we can make it happen. I'd love to see them, just like everybody else," Peralta said.

"They need to be packaged with really stale gum," Beaulieu added. "And I would eat the gum!"