True tales from work: I fell into this career but I love it 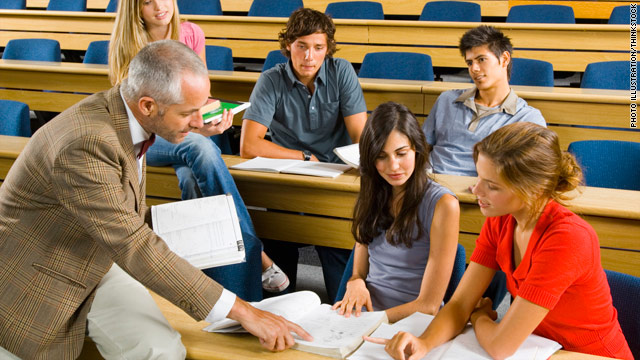 (CareerBuilder.com) -- No matter how much we plan, practice and prepare for our lives, things don't always (or even often) go as planned.

Take our careers, for example.

Most of us start dreaming about "what we want to be when we grow up" when we're in elementary school, prompted by teachers who tell us "it's never too early to start thinking about the future." We might decide at age 10 that we want to be a teacher, a doctor or a businessperson.

Then, reality sets in. Your hopes of becoming a doctor are dashed when you faint at the sight of blood on the first day of med school. You get that dream job, and six months later, you get a pink slip. You have three kids in five years and become a stay at home parent. You take on a serendipitous part-time job for extra money and accidentally discover your passion. Somehow, you wind up in a completely different career than you'd ever imagined.

CareerBuilder.com: True tales from work: I work with my ex

That's exactly what happened for these five people, who never expected to be in their current careers, but somehow wound up with a perfect fit.

"About six years ago, I was waiting tables for an Italian restaurant, while pursuing my acting career. The restaurant began taking requests for catering orders, and I was put in charge of organizing some of these orders.

"Then, the managers asked if I wanted to spend a few hours a week doing promotions for the catering, and I said yes. Within a year, we were getting so much catering business that I became their full-time 'catering coordinator.' And within another year, I was managing catering orders for four of the restaurants' locations -- and totally loving it.

"I spent five years as the restaurants' catering coordinator -- then, the economy went down; several of our restaurant locations were closed; my position was cut. I realized how sad I was about losing this job that I had come to love so much ... so I started my own catering/event planning service. And that's how greENVISION events was born."

"I'm the mother of seven, and when my hubby and I were first married, I was the 'expert' on money, having been a broker. When I married my husband Bob, who had two kids and 40K in consumer debt -- [I realized] he was also a born spender.

"Since Bob was a military fighter pilot, I put my much loved financial career on hold and then I, the so called 'expert,' became so broke with credit card debt that we didn't have enough money for groceries for several weeks.

"In my effort to deal with our financial challenges, we called a spending truce and I set about learning how to save money, pay down debt and get more bang for my buck. Even though we only had one income, we were able to pay off the 40K in debt in only two and a half years.

"Thus, a new career was born as I began to show other people how to save money. I volunteered to give free seminars at our Air Force base, and as the director of the family support center began to see a marked improvement in the quality of life of those who attended my 'Shop, Save and Share' seminars, they commissioned the Air Force Aid Society (the Air Force charity program) to make a film.

"The film was distributed to 120 bases which led to my first book being published. The book, 'Shop Save and Share' became a best seller and led to more books, speaking gigs, a worldwide tour of military bases and work as a consumer educator with Fortune 100 companies. [I have now] now authored 14 books (the latest three are with Random House)."

"I was a private investigator and the office manager of a good-sized investigative firm. My little boy had leukemia and became a bit of a local celebrity because of his friendship with Dr. Elisabeth Kubler-Ross who insisted that he be included in a television program she was scheduled to guest on. Next came several newspaper articles and then another television appearance.

"Well, before he died he told me that I should switch my career and work in television. To which I laughed because there was no way I was going back to school. Then, the reporter/producer who had done the two television stories about my son got re-assigned to create a documentary unit and asked me to join her as the associate producer. I didn't even watch television!

"It is many years and many industry awards later and I still love being a producer/writer. Now, I am an independent and work at various stations and production companies in the Northwest.

"I also wrote a book about my son's life and the lessons he taught everyone he met. It is called 'Over the Rainbow Bridge.' My career has been very fulfilling and I love the variety of duties and all of the great people I get to meet in the course of my assignments. My investigative skills have always dovetailed well with my ability to tell stories that can changes lives."

CareerBuilder.com: Is getting a job really about who you know?

"I was working as a customer service representative at a Fortune 200 paper company. I was working on my MBA (part-time) and planning to move up the corporate ladder. I got a call from the local university. They had a professor quit one week before the semester was starting. Would I be interested in teaching a four-hour evening marketing class? I said, 'Sure. I'll stop by and pick up the textbook.'

"I hung up the phone thinking, 'What have I done?' I had never taught anything before in my life and thought that split-second decision was a very bad one. Had I thought about it before answering, I would have said, 'No.'

"I prepared my first ever lecture for hours and hours. I went to the university on a Wednesday evening and taught the marketing class. After the class, I drove home, walked into my house and said to my husband, 'I want to be a college professor.' I quit my job, finished my degree, and went on to get a Ph.D. And now, here I am: an associate professor of business at Dickinson State University in Dickinson, N.D. I absolutely love every day and that one phone call changed the trajectory of my life."

"When I was in college I was heading towards a long career in public accounting. I got a master's in accounting and I was on the CPA track. I decided one summer that I would buy a house or two in my spare time as investment, so 'why not' get my real estate license so I could get a discount on the properties I purchased?

"After I graduated college I worked in a public accounting firm as an auditor, but ended up helping a few friends buy a house. Eventually after just a little over a year, I quit my full-time job as an auditor and ended up being a realtor, then a broker, and now I own my own real estate brokerage with over 20 agents (and I pay a CPA to do my taxes). I never knew my life would take this route, but I wake up every day feeling like I am living a dream."