Bullying victim: 'I believed that I did not deserve to live' 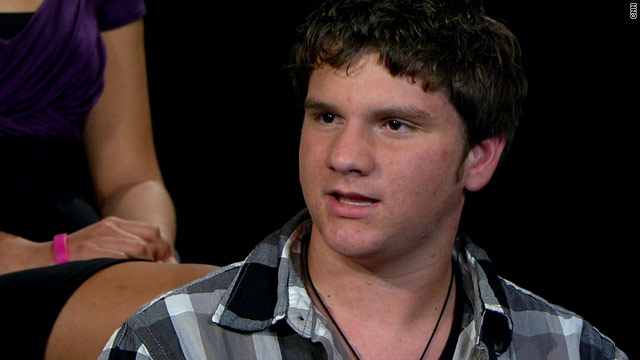 Editor's note: Bullying is in our schools, and it's online. Why do kids do it? What can be done to put an end to it? Don't miss an "AC360°" special report in collaboration with People magazine, "Bullying: No Escape," all this week at 10 p.m. ET on CNN.

(CNN) -- For Joey Kemmerling, it was his decision to reveal his sexual orientation that triggered relentless bullying at school.

"I came out of the closet as gay in eighth grade and ever since I've been bullied. I was, for lack of a better word, and still am, the school faggot," the 16-year-old Joey recently told CNN's Anderson Cooper.

The Pennsylvania native said his decision to come out to classmates not only evoked a firestorm of vicious taunts but also led to a threat on his life.

"There was a point where a kid had a knife on school premises and said, 'I'm going to kill him. I want that faggot dead.' And I had to transfer schools," Joey said.

The bullying persisted outside of school, both online and on the street. His mother, Joyce Mundy, said beyond her son being bullied online, she had to file a police report after two boys followed Joey on his walk home, making threatening comments the entire way.

Joey and seven other teens recently spoke to Cooper about the harsh realities of bullying. All eight youngsters said they were not surprised by the recent rash of headlines about suicides of apparent bullying victims.

Joey said he believes that most kids who are bullied at some point have contemplated taking their own life. "If you're bullied for long enough, that's going to go through your mind," he said.

He added, "You wake up in the morning and you just think, 'I have to go face them again. I have to spend another eight hours in that prison.' And you just don't want to be there and no matter what you do, you can't escape."

Last week, authorities recovered the body of Rutgers University student Tyler Clementi, who committed suicide after his roommate and another college classmate allegedly placed a camera in his dorm room and streamed his sexual encounter with another male online.

Read about Rutgers vigil for Clementi

The statistics on gay youth suicides are unclear since many youths do not admit to others that they are gay or bisexual. But gay and bisexual young adults, who reported higher levels of family rejection during adolescence, were 8.4 times more likely to report having attempted suicide, according to an article from the American Academy of Pediatrics in 2008.

Bullying became so pervasive in Joey's life that he admits, in his darkest hours, he too had thoughts of suicide.

"You feel so helpless, and day in and day out you're being called something, and they're telling you the same message: 'Your life is worthless.' And you start to believe it."

"I believed that I did not deserve to live," the gay teen added.

Unlike some parents of bullying victims, Joey's mother was fully aware of both the treatment her son was getting and his emotional state.

"He went through a really severe depression," Mundy said in a separate interview. "He talked to me about having suicidal thoughts and was very vocal all the way through. If you really become invested in dealing with your child being bullied, you sort of become peer, friend, counselor. ... Although I was aware how bad things were for him, it's still very scary. ... You never not want to take it seriously and make that mistake."

Mundy got her son into counseling, which helped, but she said it was his decision to fight back against bullying online that really started to turn the tide. He began a Facebook page for bullying victims to share their stories, which has since grown into a nonprofit called the Equality Project with close to 6,000 members.

Read about cyberbullying in a digitally connected world

"It's empowered him a bit to understand he's not alone. ... It's helpful for him to understand through discussions online that things get better. ... He's gotten much stronger through educating himself on the issue," his mother said.

This year, Joey is in a new school and, armed with the support of his online community, has become an advocate for bullying victims everywhere.

"People say 'Bullying can't be changed, it's been around forever.' But it really can," the teen said. "And how many people, deep down inside, have empathy, have that consideration that if you can really get down into their soul, and make them understand the way that the words affect people, then they can change."

As both he and his mother read story after story of apparent bullying victims committing suicide, they said they see his mission as critical.

"He knows he can't change every individual school, but he does want to change the system broadly," Joey's mother says, adding, "This really does have to be treated as an epidemic."