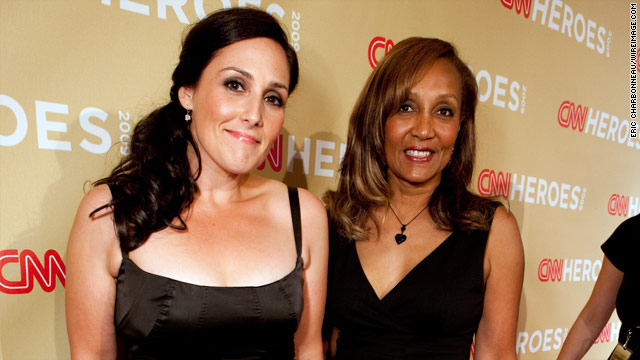 (CNN) -- Actress and filmmaker Ricki Lake has a special connection to CNN Heroes. Her friend and onetime nanny, Marie Da Silva, was chosen as a Top 10 CNN Hero in 2008 for her work starting a school for AIDS orphans in her native Malawi.

Lake sat down with CNN Entertainment senior producer Denise Quan to talk about CNN Heroes. Below are excerpts from that interview.

Denise Quan: You have a very personal connection with Marie Da Silva, don't you?

Ricki Lake: Well, let me just say that I'm the one who discovered Marie. I knew! No, Marie was my employee; she worked as my nanny for a decade. I knew from the second Marie walked in to the interview there was something special about her. She leads her life in such a positive way that she's just a great example for me.

Quan: So besides the personal connection, why is this cause so important to you?

Lake: My grandfather died of AIDS back in the late '80s, when a blood transfusion in a hospital could give you HIV and AIDS. So I'm personally, obviously, connected to this disease and wanting to find a cure.

But then you look at continents like Africa and how the population is completely annihilated by it. With Marie, to see her family members that have succumbed to the disease and the children in her village that are all left behind -- not only without parents, but without an education -- it just seems like an obvious cause to get behind. And it's just remarkable when you think of what one person, a nanny of all professions, was able to do while working for me full time. To me, Marie's picture is in the dictionary next to the word "hero."

Quan: This is your third year of involvement with CNN Heroes --

Lake: Riding Marie's coattails. [laughter] Yes, I'm so appreciative of all that you guys do and personally how I've been affected by what you do.

Quan: How have you been inspired by some of the CNN Heroes that you've met?

Lake: They're amazing. The fact that they do so much in their own lives, it's like they're so separate but so organically similar. There are so many parallels about these remarkable people that give so much of themselves to help others for very little fanfare. That's what I love about this event. It gives this, you know, just due recognition, knowing firsthand what Marie did pre-CNN Heroes acknowledgment, and post. She's been able to build a secondary school. Now they have a school bus. Now her goal is to change the curriculum of AIDS education in all of Africa. It feels like none of that would have been possible without the exposure that CNN Heroes has given her.

Quan: Why do you think celebrities like you keep coming back to help us out, year after year?

Lake: I think we're all inspired. We're all just regular people and want to do our part. I want to be close to what you guys are doing, I want to do more. I can't wait to see who's being honored this year. I look forward to that night and just being a part of it. Being there live, it's in your blood, you know? You just feel like you're walking on air to meet these people.

Quan: Why do you think we need to honor everyday heroes?

Lake: We all could use a little inspiring. To see what our neighbor is doing to help others, I think, makes us do better and be better. It makes you feel good. It makes you feel like you're doing something worthwhile. We all can do a lot more than we're doing.