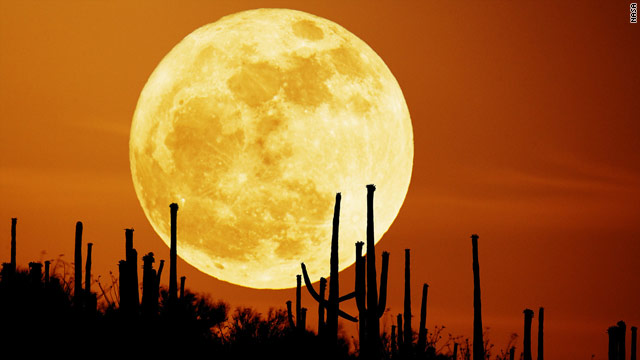 The last day of summer 2010 in the Northern Hemisphere coincides with a full moon.
STORY HIGHLIGHTS
RELATED TOPICS

(CNN) -- Tonight is the night of the Super Harvest Moon.

It's the last day of summer in the Northern Hemisphere, the beginning of the autumn season and it perfectly coincides with a full moon tonight. And it's the first time in almost 20 years that the stars have aligned for an event like this. (We fully acknowledge that the moon is not a star but it's not very often we get to use the phrase in such close context).

When the summer sun starts setting this evening, it will blend with the rising autumn moon to produce a unique "360-degree style" twilight. The two low-in-the-sky light sources mix together and illuminate the sky all around you, unlike the typical one-at-a-time approach you see when you drive home from work. And it's from this extra twilight lighting that the Harvest Moon gained its place in the celestial calendar. With farmers depending on moonlight to harvest their crops, they would note the autumnal full moon. Thus the phenomenon's name.

Be sure to take a good long look at the moon as it travels across the sky tonight, because you may notice that it looks a little different. According to NASA's Dr. Tony Phillips, you'll see the "moon illusion" at work. It will look abnormally large -- an optical illusion that comes about when the moon sits lower than usual in the sky.

It's not the first time that the moon has matched up to the calendar and created an event like this, but it's the closest. In fact, the time between the official autumnal equinox (11:09 p.m. September 22, according to Science@NASA) and the full illumination of the Harvest Moon is down to only a handful of hours -- just six. This is quite a drop considering that the full moon more commonly makes its full appearance days or weeks on either side of the equinox.

The closest its came to this in the past was September 23, 1991, but even then it was a 10-hour difference, and according to Science@NASA we won't see it like this again until the year 2029.

So be sure to take advantage of the extra hours of moonlight and cram in that extra harvest work, or maybe just enjoy the show; either way you should definitely take a look in the sky tonight.