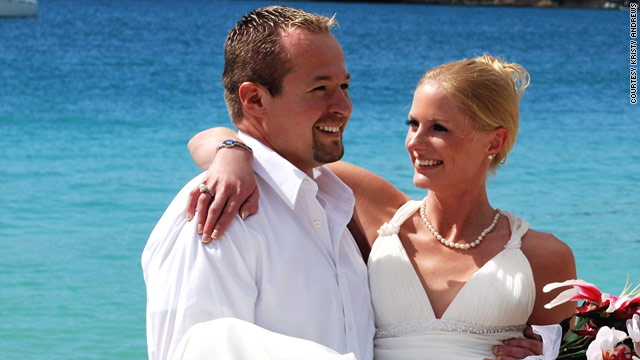 Despite coming from divorced families, Karin and Stephen Fullington married in December. They say their marriage will last.
STORY HIGHLIGHTS
RELATED TOPICS

(CNN) -- By the time Zulema Green turned 12, her mother had been divorced three times.

Her husband, Cory Green, was 3 when his father abandoned his family.

As the Georgia couple recently celebrated their fifth wedding anniversary at an upscale restaurant overlooking Atlanta, their milestone represented a far more personal challenge for each of them: They didn't follow their parents' footsteps.

"I figured I can get married," says Zulema Green, now a 31-year-old attorney. "I can do it right."

There are no precise statistics on the divorce rate in the U.S. because not all states report divorces. But among the states that did report, there were 3.4 divorces per 1,000 people in 2009, according to the National Center for Health Statistics.

Experts say the number of divorces has risen since the 1960s because of laws making it easier and divorce becoming more socially acceptable.

After all those divorces in years past, it's no surprise that in modern-day couples at least one or both partners come from a family with divorced parents. But coming from a family that suffered marital discord can present challenges to the relationships of adult children of divorce, marriage experts say.

The risk of divorce is 50 percent higher when one spouse comes from a divorced home, and 200 percent higher risk when both of them do, says Nicholas Wolfinger, a professor of family and consumer studies at the University of Utah and author of "Understanding the Divorce Cycle: The Children of Divorce in Their Own Marriages."

Children of divorce are also 50 percent more likely to marry another child of divorce, he said.

Marriage counselors say they have seen marital strains affect the way a child perceives his or her romantic relationships. Zulema Green says she once approached her relationships with men cautiously. She had difficulty trusting and relying on other people.

In an effort to not follow her mother's path to divorce court, she read dozens of books on relationships and divorce. Before she and her boyfriend got married, they enrolled in premarital counseling.

"We realized our parents' relationships affected our relationship, and we didn't want to have a failed marriage," she said. "There are already so many things against you when it comes to marriage. We wanted to make sure we knew as much as we could."

The effect of divorce on children can be very different, says Bradford Wilcox, director of The National Marriage Project, a research group that examines marriages. Some adult children of divorced parents avoid long-term relationships and marriages, while others become determined to make their own marriage last.

"Divorce is a risk factor, but there's no such thing as a single sociological factor that dooms you to marital failure," Wilcox says. "It's important for couples to articulate their concerns to their boyfriend, girlfriend or spouse."

William J. Doherty, a professor at the Family Social Science Department of the University of Minnesota, says a failed marriage in the family might actually propel a child of divorce to get married, often times at an earlier age.

"They [the couple] will cohabitate, or they are more eager to jump in," he says.

Sarah Hill, 21, of Texas watched her mother endure two divorces. She says her father was largely absent, playing only a small role in her life. As a result, having a family of her own in a strong marriage became important to her.

Hill met her fiance Casey Foran, 23, at a St. Patrick's Day party two years ago. His parents had also divorced when he was young. Their similar family histories led the couple to a unexpected connection.

They plan to marry in April.

"My mom's divorces have taught me there are tough times, and you suck it up like a soldier," she says. "You work on it. You make it better."

Helen Fisher, an anthropologist and dating expert at Match.com, one of the largest online dating websites in the U.S., says divorce in a family can sometimes help children strengthen their own relationships with their future partner.

Fisher says children of divorced parents may be more likely to spot a troubled partner and avoid toxic relationships. These children are often more resilient and overcome obstacles quicker in relationships, she said. They may also take more time to determine whether marriage is the right choice for them, and studies have shown divorce rates fall when people marry at a later age.

"We may very well see a generation of stable relationships," Fischer says.

Karin Fullington, 29, of North Carolina watched her older sister divorce when she was in college. A few months later, her parents split up. Those divorces caused some doubts on Fullington's own relationships during her 20s, but the events also helped her navigate them.

"You need to learn from the past to keep something negative from repeating," said Fullington, who married in December. Her husband also has divorced parents.

"If you want a happy marriage, look at the divorced couples out there. Find out what went wrong with them and make sure that doesn't happen to you."

Elise and Terrance Hines of Colorado have lived through divorces within their families. Elise's parents divorced after more than two decades of marriage around her 26th birthday. Watching her parents' seemingly solid marriage break up caused her to question whether any marriage can last.

Terrance Hines recalled his own parents' divorce when he was 12, an event that produced stress and uncertainty during his teenage years.

Now married for 14 years and with two children, the Hines' say they are proud that their marriage is different from their parents -- at least so far.

They have learned to constantly communicate and talk through their problems. Unlike their parents, they say they support each other and demonstrate patience when one of them makes a mistake.

"Don't carry the baggage from your parents' divorce," he said. "They make their own decisions."

She added: Enjoy each other. Don't hold grudges. Laugh.

And each day, the duo adheres tightly to one more motto, "Divorce is not an option."