Battle buddies share 'the toughest job in the Army' 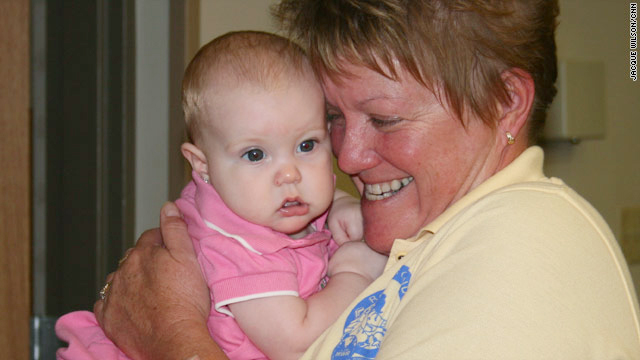 Marla Schroeder, the wife of one of the top commanders of the 101st Airborne, comforts a baby at a recent meeting on base.
STORY HIGHLIGHTS

Fort Campbell, Kentucky (CNN) -- Ann Campbell and Marla Schroeder dub each other "battle buddies," although they've never gone to war. Between them, they have 45 years in the U.S. Army. They're the wives of the top commanders of the 101st Airborne Division.

Their job has become even more important this year. This summer, the base has seen the highest three-month death toll in Afghanistan since the war began. Forty-two soldiers from the 101st were killed during the months of June, July and August. Another six soldiers have died in battle in September.

Roughly 17,000 soldiers from the 101st -- nearly the entire division -- are deployed as part of the surge in Afghanistan.

"We've had a very tough couple of months here in Afghanistan with casualties," Maj. Gen. Campbell tells CNN from Afghanistan. "I tell you we've got a very resilient force in our soldiers and we have very resilient families. ... And I'm just thankful to be a part of it."

On this day, Ann Campbell and Marla Schroeder -- whose husband is Division Command Sgt. Maj. Scott Schroeder -- have come to a three-hour Family Readiness Group seminar to prepare other wives for the year ahead: how to stay strong, how to communicate with each other, how to maintain calm when the one you love most is not around.

"We can be there and bolster each other up and get through the hard times together," the general's wife says. "We want to make sure our families have all the tools and resources they need to be resilient during these back-to-back deployments they've all experienced."

Marla Schroeder slips through the crowd and scoops up a fussy baby from her mother. The baby coos. Schroeder beams. Sometimes, pitching in can be as simple as cradling someone else's baby.

"We want grandchildren, but no time soon," she says, holding up the baby for all to see. "She's beautiful!"

Behind her is a sign: "FRG is not a disease!" 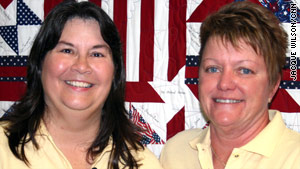 Ann Campbell and Marla Schroeder dub each other "battle buddies" for the tight bond formed on base.

The two have known each other for more than a decade, meeting first when they were Cub Scout leaders for their oldest sons' troops.

Schroeder smiles when she talks about her battle buddy. "Working with her is just a phenomenal thing," she says. "I am overwhelmed every day. She's great."

Schroeder says she's an "easy cry" and that Campbell helps her get through those rough days. When she's at airports and sees soldiers get handshakes from civilians, the tears come again. "I get teased a lot about my invisible T-shirt that says, 'Please ask me about my husband.' He just embodies the American soldier."

Both of their husbands will be in Afghanistan for the next year, along with their fellow soldiers.

Ann Campbell's husband, the commanding general, is on his third deployment. He served one tour in Iraq and is now on his second tour in Afghanistan. She says it's important for spouses to have battle buddies. "Those are the folks you lean on," she says.

"Stay strong, stay in touch with the Army family. Wrap arms around each other."

There's new anxiety for Campbell. On this day, her youngest son shipped out to Fort Bragg, North Carolina, for his first stint in the Army. "It's a whole different ballgame when it's your child going," she says.

She doesn't have any rituals to send off her husband of 26 years or her son. "You just try to keep the tears away until they're out of sight."

Marla Schroeder's eyes fill with tears when she's asked about the heavy toll the summer months have taken on the base. "When the news is first broken, I usually have to sit down somewhere by myself, because every soldier lost is one too many," she says.

Fort Campbell holds a ceremony on the first Wednesday of every month to recognize fallen soldiers from the month before. It's a way to help the community heal, but "we never forget."

A mother of three children, Schroeder has been married for 19 years.

"Do I miss him? Oh yeah," she says. "Do I worry about him? Sure. But is it a bad thing? No, because every month he is gone I am that much stronger. I have that much more stuff in my kit bag."

Her oldest son also serves in the Army. She has two teens at home. She stays busy running them around to soccer practices; one just got his driver's license and the other is learning to drive.

"My husband picked a great year to go away," she says with a laugh.

The highlight of the family's weekly routine comes around 9:30 p.m. on Saturdays. That's when Sgt. Maj. Schroeder calls home and the kids hear their dad's voice again.

"Being an Army wife is a positive state of mind. You have to be able to step forward, empower yourself and do it," Marla Schroeder says.