Out of the kitchen, into the priesthood 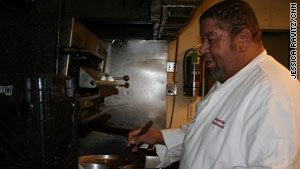 Kenneth Smith, a longtime executive chef in New Orleans, Louisiana, is on his way to becoming a priest.
STORY HIGHLIGHTS
RELATED TOPICS

Editor's note: Kenneth Smith had been a fixture in the highly rated Upperline Restaurant of New Orleans, Louisiana, where for the past 11 years he served as the executive chef. But after about two decades working there, he has moved out of the kitchen and into New Orleans' Notre Dame Seminary, on his way to becoming a priest. CNN sat down this summer with Smith, 50, before he took off his apron. Below, in his own words, he explains how serving up faith is a logical leap.

New Orleans, Louisiana (CNN) -- My dad died when I was 2, so my mother raised us [Smith and his sister] and exposed us to different things. We took music lessons, art appreciation lessons, and we even went to finishing school. Mrs. Howard's School of Charm.

My sister and I hated it at the time. We just wanted to be normal kids and eat our Frosted Flakes on Saturday mornings in front of the television, watching our Looney Tunes.

My mom was a very good cook. In fact, she was a private cook for an attorney for years. She exposed my sister and I to the same types of food that she was cooking at work. We were basically the only kids on our block that had eaten lobster with drawn butter.

On holidays, we would go to work with her. We'd always sit in the kitchen. I was just amazed with all the cooking ingredients and implements.

I was one of those guys that was never picked to be on someone's baseball team or basketball team, so I started cooking. My mother had always had a lot of cookbooks. I just started playing around. I started baking. We always had butter; we always had flour and sugar and vanilla and eggs. I might have looked at other recipes and didn't think we had the ingredients, and I certainly didn't have money to go buy them.

The first thing I baked was a cake. I was 9 or 10. It was a plain yellow cake. I can remember the icing being a little runny, but it was good.

We went to Catholic school. We went to Mass once a week, while in school, as well as on Sundays. God has always been with me.

Read more about faith and religion on CNN's Belief Blog

I've certainly called on God when I'm in the kitchen, when things are going wrong, when I'm irritated or very upset about something. I've called on God walking up here to unlock the doors and come into work -- to help me at not being quick-tempered or losing my cool. Help me be the person I need to be.

It [becoming a priest] is something that I thought about as a child. It was something I was going to do out of high school, and I put it off. I'm glad now that I didn't go through with it, because I was very immature. I wasn't ready. But now I feel very strongly, and I know in my heart that I'm ready to do it.

I didn't wake up one morning and just sit up in bed and stretch and say, "Well, I think I'll try the priesthood." There's a lot of prayer involved. This prayer process, that's neverending. I have a spiritual director I work with, and I started out with that at first. But this process of thinking about it, it's been all my life.

I developed a very close relationship with the archbishop [Archbishop Gregory Aymond of the Archdiocese of New Orleans]. He was here, at the restaurant, one night about two or three months ago, and I said, "There's something on my mind, and I'd love to talk to you about it."

I'm hoping I can still do things [in a kitchen], but I'm hoping I can do it on a small scale, for fun. I would love to do something for the needy or poor, during the holidays when people really feel their lowest. Not just your typical out-of-the-can, warmed-up meal; I'd like to do it [serve them] just like you'd get here. Top quality.

I'll move into the seminary. I am looking forward to embracing the simple life. That gives me great pleasure to think about. I want to give all of myself, and I don't think you can do that when you have a lot of baggage.

I have this massive cookbook collection -- close to 3,000 books -- that I'm not just going to leave or just throw away. I have thought about, if I passed away, where would it go. I want to donate it to a school.

With baking, you have to follow the rules. I try to be a very good rule player. Play by the rules and work by the rules. The prayer life, the rules that a priest is supposed to live by, that really excites me. And being able to help people and minister to people.

Yesterday at Mass, one of the readings was about the widow who gave all of what she had. I want to emulate her, and I think this is the best way that I can see for me.