By Diane Noble, Special to CNN 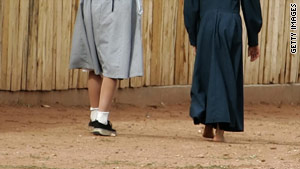 Editor's note: Diane Noble is the award-winning author of "The Sister Wife," the first book in her new historical polygamy fiction series "Brides of Gabriel."

Last week a young woman sent me an e-mail that opened with this question. She went on to say that she had picked up my book, "The Sister Wife," at Wal-Mart, thumbed through it, and then put it down again. Though the story intrigued her, she didn't want to buy the book until she knew if I was writing from a point of view that wouldn't offend her religious beliefs.

That same evening at a book signing, a high school teacher told me a senior honors student had spotted my book in her handbag and asked about it. When the teacher gave her a brief synopsis, the girl looked distraught. She said that her religion should not be written about by an outsider. Furthermore, her teacher should not be reading this book. "There are things in it you shouldn't know," the girl said.

At first these may seem like instances of young people who have a lot to learn about their own beliefs, those of others, and especially about expanding their minds through reading, education, and discourse. But I have to wonder if their reactions to an admittedly controversial subject are a reflection of a more serious problem that's rearing its head in today's polarized world.

We see it when the "ground zero mosque" is mentioned, we see it when our president's heritage is picked apart, we see it when issues such as social justice are condemned and churches vilified for using those two words in their prayers. Labels are affixed to those who are different from us, purposely conjuring up even greater fear. Words fly across the media airwaves like volleys of weaponry.

I've studied yesterday's polygamists, and today's, as appalled as anyone about the treatment of women and children in fundamentalist offshoots of the mainstream Church of Jesus Christ of Latter-day Saints. (Mormons are just as appalled as the rest of us, I might add.) More than that, I am sickened by the practice of marrying child brides to men old enough to be their grandfathers. In my opinion, this practice has nothing to do with religion; it has everything to do with pedophilia.

I'm also concerned that HBO's popular "Big Love" and TLC's upcoming reality show "Sister Wives," for the sake of entertainment and palatability, can't give us the whole truth about life in polygamous families. I'm concerned that both shows are essentially promoting a lifestyle that is illegal in the U.S.

In the 19th century, however, polygamy was first practiced as a means to take care of widows and orphans on the rough and dangerous frontier. Mormons had been tortured and killed and chased from their settlements. Mothers with young children were left without homes or husbands to care for them. Was the practice of polygamy humane? I believe it was. Was it easy? Ask any woman who's known jealousy and she would probably say no.

"The Sister Wife" is a fictional account of three women married to one man in the early years of Mormonism. It is a character-driven story that uses this new frontier religion as a backdrop.

I write unapologetically from the perspective of my belief in a personal God, that no one church is the only true church, and that no one religious leader has all the answers. And from a rather simplistic belief that all religions have skeletons in their closets.

Yet my book has been banned by certain religious groups.

Lately, I've wondered at the deeper story in all this: our collective fear of those who are not like us, our discomfort with the unfamiliar, our anger toward those who don't believe as we do. The deeper story, I believe, isn't about books or TV shows that take us out of our comfort zone. It's not about polygamy, whether practiced by Muslims or by Mormon fundamentalist offshoots.

The deeper story has to do with how we see, how we interact with, the real people who differ from us -- those neighbors with skin of a different hue, those families who attend a mosque instead of a church or synagogue, or wear tip-to-toe clothing alien to us, or have a different way of praying.

"What religion are you?" the young reader asked. Is it the same question buried in our own hearts, though not out of curiosity, but out of judgment and fear?