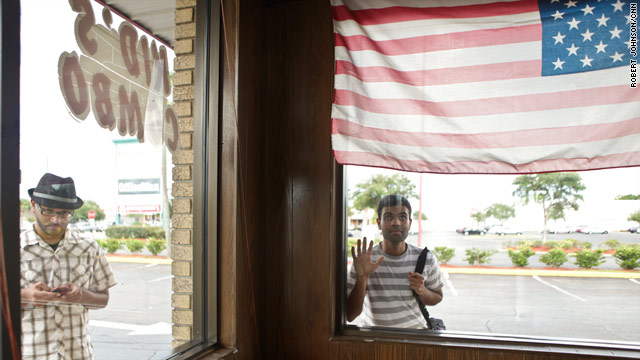 (CNN) -- The blue Chevy Cobalt broke down amid the mountains of Montana in an area where there was no cell phone reception. The Muslims in the car, on a cross-country journey for the holy month of Ramadan, approached a bushy-bearded fisherman.

It would be another test of a question they wondered when they first set off from New York three weeks earlier: Is America still the accepting nation that embraced our forebears or has it reached a new level of intolerance?

Far from the media frenzy dominating headlines, from the so-called "ground zero mosque" to a pastor's planned Quran burning, Aman Ali and Bassam Tariq traveled more than 13,000 miles into the heart of America over the last month, visiting 30 mosques in 30 days for Ramadan.

They began in New York, headed south and then cut across the country to California before making their way back, ending today in Michigan in the nation's largest Muslim community.

The fisherman in Montana became the embodiment of their trip -- Ali and Tariq were embraced nearly everywhere they went, from a Confederate souvenir shop in Georgia to the streets of Las Vegas, Nevada, to the hills of North Dakota where the nation's first mosque was built in 1929.

Like any road trip, there were strange moments along the way: A Mississippi police officer quizzed them about their beliefs on the ground zero mosque and they were asked to leave a mosque in Mobile, Alabama.

They chuckle about those experiences now and emphasize it shouldn't overshadow the whole trip because, ultimately, they discovered that America still embraces immigrants and the nation is filled with welcoming and loving people.

Ride along on the Ramadan road trip

"After 13,000 miles, I think that America still exists, and I'm happy to know that it does," said Tariq, a 23-year-old American of Pakistani descent. "It's really made America feel like home to me in a way that I've never felt before. The America that we think about [as immigrants] is still actually there. I've seen it! And I'm seeing it still."

When he approached the fisherman after their car broke down, Tariq says, he didn't know how he'd be received. He asked if he could hitch a ride to town and the fisherman "happily does it." When the man asked Tariq what he was doing in Montana, he told him about their 30 mosques journey.

"And he doesn't flinch and doesn't get worried," Tariq said. "For me, it was like, 'Wow! That America still exists.' "

I knew our roots went deep in this country, but it was great to truly experience it.
--Aman Ali
RELATED TOPICS

He had a similar experience among Bosnian Muslims in Boise, Idaho, where it took 12 years for the community to build a mosque there "with their bare hands." He saw one man cry on entering the mosque. An elderly couple hugged each other when they walked inside.

"It means so much to these people who've been displaced from their own country, and they come here to this place of worship," he said. "That, to me, is really what this country is about."

For Ali, his favorite moment was Ross, North Dakota, a blip of a town with a population of 48 people. He knew little of the town's rich Muslim history, and it was difficult to try to find someone in the town who did.

A pastor directed them to a woman, who kindly pointed them down a dirt road to where the nation's first mosque once stood. It's no longer there. It's been replaced by a tiny cement block mosque, complete with a gold dome. Nearby, there's a cemetery marking the pioneering Muslims of America, with birth dates of 1882, 1904, 1931.

Ali stood in awe. As he approached the mosque, his heart pounded. "I knew our roots went deep in this country, but it was great to truly experience it. Praying in there was like hopping in a time machine," said Ali, a 25-year-old Muslim who was born in Columbus, Ohio. "I literally felt like I was plummeting and falling."

His takeaway from the trip, he says, was seeing how Muslims in America have assimilated in their communities, from Jacksonville, Florida, to Wichita, Kansas, to Oklahoma City.

"It was really cool and refreshing to see people who genuinely love the communities they're in and they're there to stay," Ali said. "They're involved in the community, not just the mosque."

It was also remarkable to have people, Muslims and non-Muslims alike, "just bend over backwards and be friendly to us," he said.

Tariq said their blog also helps the rest of America realize "you have to accept Muslims are here in America to stay, and we've been here for awhile. Even the most bigoted person has to accept that."

As for what's next for the young men, they plan to celebrate Eid with their Muslim brethren in Dearborn, Michigan -- happy to have discovered an America that still embraces them, even if that's not always portrayed in the news media.

"It's a small but vocal group of Americans in this country pushing this anti-Muslim rhetoric," Ali said. "And unfortunately in our society, whomever shouts the loudest is going to get the most air time."