My not drinking bothers friends

By Megan Knash, The Frisky 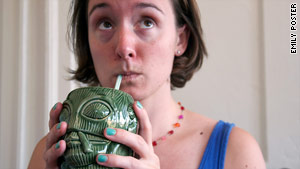 (The Frisky) -- At a recent dinner party, my friend's roommate poured guests another glass of white wine. It smelled crisp, cold, and juicy -- clearly the sort of wine that prickles the gums, softens the face and transforms a summer evening into one soft-hued hum.

She stopped at me. I held up my glass of sparkling non-alcoholic apple cider. "Cheers," I said.

Three years after quitting drinking at the age of 27, I've accepted my role as the non-drinker at any given dinner party or social event. I'm happy with my decision to teetotal, but some of my peers are less so -- for example, my friend's roommate.

"So you're not drinking? At all? Really?"

I insist I'm fine with my cider.

Life without alcohol demands strategy. For example, most dinner parties don't provide a non-alcoholic beverage, so I bring my own -- something with garnish and flair, something as fancy as the alcoholic option: organic lemonade with strawberries, slow-brewed ginger ale with candied ginger, iced green tea with homegrown mint.

At gatherings, fellow guests ogle my drink, share if they're so inclined, ask some questions and then relax.

Usually, people are more interested in what's in their own glass. So much so that people forget: 1) I didn't drink last time; 2) I am not currently drinking; and 3) I won't be drinking in the future. Even after telling new friends a dozen times I don't drink, they still offer me alcoholic beverages at parties or picnics. It must be unfathomable --or maybe just forgettable -- that a 30-year-old woman wouldn't tipple.

The Frisky: 15 life tips every woman needs to know

When I first quit drinking, having to say no to cute cocktails and slender-stemmed wine glasses filled me with bottomless shame. I've since grown into my life as a non-drinker -- a life without starting awake covered in sweat and wringing my hands as I fumble to recall what I said or did in the previous hours -- and embraced my choice to abstain.

I relish the benefits, too. I sleep like a kitten. I feel clearer and calmer than I ever did during my decade-long stint with booze. I enjoy beautiful mornings. I don't let secrets slip.

If people really want to know the brutal truth of why I quit, I tell them. I blacked out. I behaved badly. I couldn't predictably control my intake. I made poor decisions. I experienced gut-twisting, head-imploding hangovers. Anxiety choked me. But these truths are a buzz kill.

So when people ask me, I'll usually say things like, "It didn't work for me anymore." Or, "I come from a long line of alcoholic depressives, and I thought it would be smart to stop." Or, "My drinking days are over, but I'll still par-tay with you!" Then I shake my tush and grin.

I'd like to think these answers demonstrate I'm not humorless or judgmental. It doesn't bother me that other people can still drink when I can't. Some people can't eat shellfish or wheat. But I accept that I'm largely powerless as to whether others misinterpret my choice as an admonishment of their own lifestyle.

After clearing plates in the hot apartment, our party sat down with dessert and fantasized about fall-weather activities.

"We could stop by the vineyard on the way back," said the roommate.

Consensus swept over the room. It was decided: to a vineyard, we would go.

"I can be the designated driver," I laughed.

"Here you propose this wholesome activity, and I suggest we go have drinks instead. You must think I'm an alcoholic!"

It wasn't the first time the roommate asserted what I must think of her.

At the first party we attended together, while she poured her second glass of wine: "You must think I'm an alcoholic!"

The Frisky: 10 celebrity excuses for their DUIs

During an evening at a Thai restaurant when she described her previous evening's date at a bar: "You must think I'm an alcoholic!"

In fact, I don't think she's an alcoholic, only that she's self-centered to believe my personal choice somehow indicts her.

Later that night, she addressed me with an alternative to the winery.

"We could pack a picnic to eat at the orchard and buy some apple cider to drink. Only the rest of us could spike ours with a flask of whiskey and enjoy a real drink. A real drink!" She eyeballed me for a reaction and laughed. I laughed too.

A real drink. An adult beverage. Where do we learn these terms? Recently, my husband, who quit drinking at the same time I did -- not because he had a problem but because he never enjoyed drinking all that much to begin with -- was asked by a fellow lawyer why he wasn't having "an adult beverage."

Anyway, as adults, shouldn't we make decisions based on our own preferences, strengths and weaknesses rather than allowing social norms to dictate our behavior?

I couldn't figure out why the roommate kept bringing up my dryness that evening, but I suspect the threat of having a non-drinker in the midst is that, when folks are drinking together, everyone -- except the abstainer -- is going somewhere. Together. On a journey. Booze softens the edges. It massages the ache of unspoken words. It dissolves the perceived boundaries among people. When you're sober, especially if you want to stay that way, you have to be at peace with where you are. You have to believe you're already where you need to be.

The Frisky: 1 in 4 are in love with someone else

There are a lot of young recovering drunks out there who could be benefit from their drinking peers' acceptance and support -- or at from their least social tact. I chalked up the roommate's behavior to callousness or insecurity. Her nightlong needling didn't send me shuttling to the bottle, but someone with less time sober might not have the same tools, the same carefully constructed self-respect, or the same support network as I.

For many, drinking versus not drinking is the difference between life and death. Harping on a vegetarian for not enjoying meat at a barbecue is galling and insensitive, but if the vegetarian breaks down and heads out for a hamburger after the party, she won't die.

An addict who picks up a drink after being nit-picked by her peers might despair and throw herself off a building or just sink back into the groove of self-destruction and self-hatred that could come to define her life.

If someone makes the difficult choice to quit drinking, it's quite possibly to save her life, not a commentary on anyone else's and definitely not an issue to be mocked or interrogated at a social gathering.

I'll raise a solemn -- and sober -- glass to that. Now, who's game for some ass-shaking?

The Frisky: Perfect way to save face after getting drunk