'My own dad tried to kill me:' Faith, friends help in survival 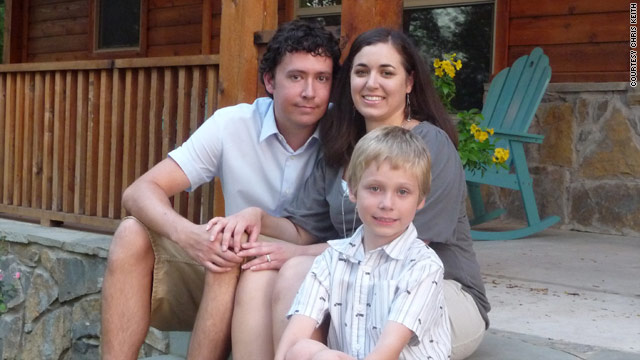 Chris Keith pictured with his family. He says his son, Dylan, is proof that good can come from evil.
STORY HIGHLIGHTS

(CNN) -- Chris Keith was 12 years old when he learned his family didn't die in a car wreck.

His father suffocated his mother and then shot Chris' 8-year-old brother, Mikey, in the back of the head while he slept, his grandparents explained.

The elderly couple had taken the boy to a counselor. As they told him the real story of what happened, they pulled out newspaper clippings from October 1985.

Chris had begun to wonder about the scars on his own head, and he had pieced together other clues from the past. Yet he'd never known the full truth. His grandparents then told him the hardest news of all. Before his father killed himself, he put the .38-caliber handgun to Chris' head and pulled the trigger.

Medics had declared everyone in the house dead, including Chris.

Now 30, Chris Keith visits church youth groups and juvenile justice centers to tell his story. A Christian, he believes God had a plan for him and that's why he survived.

Headlines occasionally bring back terrible memories, like the recent case in South Carolina where a mother is accused of suffocating her two boys before putting them in their car seats and letting the car roll into a river. When he hears stories like that, especially when a child survives, he bows his head and prays.

At 12, Chris grappled with the impossible: How could my father do something so evil?

"It was almost like going through it again. I started feeling all these feelings again, of anger, of betrayal, of feeling like nobody wanted me. I was angry at the world, and mad at my grandparents for waiting so long to tell me.

"I was mad at my dad. Mad at my mom for taking him back so many times."

Memories flooded back. He recalled being in the hospital, staring at the door. "I was waiting for my mother to walk through or for my brother to come in and say, 'Hey, everything's going to be OK. We're going to get out of here soon.' "

Now, he tells struggling youth that they're not alone in this world. "Even when we feel we have no inner strength left, you can make it," he says.

I have a second chance in life, and I just want to make the most of it.
--Chris Keith
RELATED TOPICS

After he was shot in the head, he crawled to his brother's bed and saw that his beloved brother was dead, he says, citing the coroner's report of the massacre. Bloodied with a hole in his head, Chris then crawled toward the doorway as if he was trying to find his mother.

It was there that a medic saw him move, ever so slightly, after he'd already been pronounced dead. A video from the scene shows a first responder emerge from the front door. "We've got one alive in here!"

"I didn't want to give up," he says. "I firmly believe Jesus had his hands on me, saying, 'Somebody is going to come for you.' "

He says he doesn't know why he survived, while his mother and brother died. He's struggled with that over the years: "What if my brother survived and I didn't?"

Those are questions he'll never be able to answer. "I just know that my life was saved," he says. "Doctors don't know why I'm alive. ... I have a second chance in life, and I just want to make the most of it and maybe help others who are internally suffering."

Yet, it took years -- and lots of counseling -- to reach this point. He turned into a recluse in middle school and high school. Sometimes, he'd lay in bed all night, unable to sleep, "just thinking." He was the kid who just wanted to get through to the next day.

"It's crazy to think about -- those incidents were something that my dad did," he says. "My own dad tried to kill me, so who am I supposed to trust?"

Sometimes he struggled with guilt -- feeling it somehow was his fault. "I was always searching for things that I could have done."

Once, somebody asked him: Are you afraid you're going to go crazy like your dad?

"It just hit me really hard, and I don't want to be like that."

He carried a newspaper clipping about the killings in his wallet. At 14, he showed it to his youth minister. Tears rolled down the preacher's face as he read.

"It was amazing to me because I had never seen a man cry before," he says. "It made me realize somebody cared about me."

Chris' best friend walked in at that moment. Handed the article, he too began crying.

Chris credits his youth minister and his best friend, as well as his grandparents and his church, with helping him get through. In them, he could see that "not everybody is as selfish as my dad was. And that helped me cope."

When he would lock himself in his room, he'd often listen to music. The lyrics of one song resonated: "Do not let the world get you down and remember that a bright shiny day comes after the rain. It is going to get better."

He married young -- at 19. "I was longing for a family. That's just something I wanted."

He and his wife celebrated their 10th anniversary this year.

If you need proof that good can come from evil, he says, all you have to do is look at his own son, 6-year-old Dylan.

He says he constantly tells his boy "I love you" and holds him tight. When he sees his boy playing, he sometimes thinks, "Man, how could my dad do that?"

Chris now works with Upward Bound Outreach ministries as well as working at a long-term care pharmacy in Fort Worth, Texas. He's working on getting a degree in computer engineering and maintains his own blog.

He's got many goals in life. At the top of the list: "To not end up like my dad."

"I just want to try my best to see others make it."