U.S., Mexico volunteers team up to help strays in Tijuana 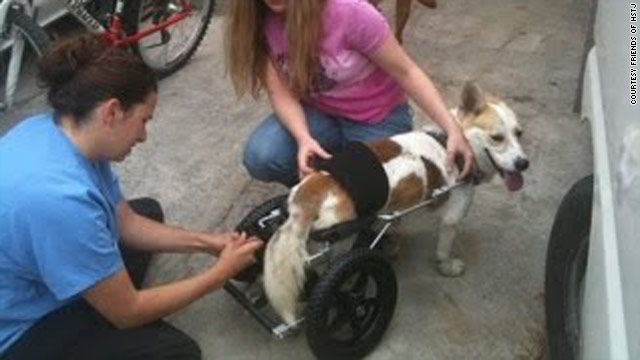 Volunteers hook up Napoleon's cart so the paralyzed Corgi mix can go for a walk.
STORY HIGHLIGHTS
RELATED TOPICS

(CNN) -- Life isn't easy for stray animals on the mean streets of one of the world's busiest borders.

An estimated 7,000 animals spend their days dodging traffic, looking for scraps and living -- and dying -- in the streets of Tijuana, Mexico.

While no data have been officially collected on the number of strays, Tijuana city officials and the local humane society have come up with an estimate of 1.4 million people from about 750,000 households -- from where about 1 percent have an animal that roams the street.

The San Diego veterinarian says an all-volunteer nonprofit group of veterinarians and animal lovers from the U.S. and Mexico have joined together to spay, neuter and treat the forgotten dogs and cats.

"The group was formed to try to advocate humane euthanasia at city pounds and reduce the population of street animals," LaMere said.

In the past, the government dealt with the problem by rounding up the dogs and electrocuting them, she said. Her group has successfully lobbied to get the local pound to use painless lethal injections.

Napoleon has become a living example of what the two nonprofits can do together.

The Corgi mix was found underneath a Tijuana porch after apparently being hit by a car. The dog was partially paralyzed and unable to use his hind legs.

"We raised money for his cart in no time. Now he has his own cart and he's able to get around without dragging himself all over the place," LaMere said.

Napoleon, a medium-sized dog, has a two-wheeled cart that straps around his midsection. The cart supports his paralyzed back legs and allows him to run.

LaMere said her group conducts "itchy-scratchy clinics" once or twice a week to treat animals for parasites. It also holds sterilization clinics at least once a month.

"Once animals become healthier, people are more willing to take responsibility for them," she said. "It's a new angle on rescue."