By Emily McCombs, The Frisky 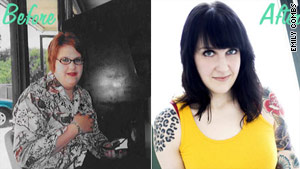 (The Frisky) -- I come from a small-ish town in Oklahoma where we've never met a vegetable we couldn't fry and the only things more super-sized than our portions are the huge church complexes that alternate with fast-food restaurants along our roads.

So it maybe isn't such a big surprise that by the time I graduated from high school, I weighed 260 pounds. My prom dress was a size 24, and my mother had to help me zip it up, a five-minute ordeal during which we grunted and cursed at one another.

My aunt had to custom-make my graduation gown, a huge white tent in which I resembled the Stay-Puft marshmallow man.

The Frisky: 10 stars who starve themselves for celebrity

Still, I left for college in New York City feeling relatively confident. After all, I wasn't just fat. I was also stylish, managing to alter and combine pieces in a way where they overcame their origins as shapeless sacks designed by people with the gall to decorate plus-size garments with ice-cream cones and slices of pizza.

And I was hilarious and sexually brash, defense mechanisms mastered by fat women and gay men everywhere.

I wasn't immune -- hurtful things would happen on occasion. Groups of rowdy teenagers sometimes yelled insults at me from car windows. I gave my phone number to a nice guy, only to find out when he called that he had a fetish for overweight women, shamelessly telling me that he likes "something to grab onto." Or someone would approach me out of nowhere on the street and tell me not to worry about how I look; someday -- when I'm ready -- I'll lose the weight.

And of course, I compared myself endlessly to the impossibly thin women in magazines, just like the average-weight women I knew, to whom I also, by the way, compared myself.

Despite these blows to your self-esteem, for the most part nobody close to you really tells you to your face what they think about your weight. As a result, a fat girl's worldview is missing vital pieces of information. When you don't get invited on your friends' man-catching all-girl outings, or when men who enjoy sleeping with you over and over again fail to want to date you, you can't quite comprehend that all this is really caused by the way you look.

But then, the summer before my junior year of college, something changed. I made a promise to myself to diet just for one summer, and for the first time I saw results. On a low-carb plan, I started melting away, shrinking inwards. I began to grow collarbones and hipbones, sprouting bony, sharp spots all over my body. By the end of the summer, I was 50 pounds lighter, and within a year I was down to 160 pounds on my 5'11" frame, a solid size 10.

It's been six years now that I've maintained that weight loss, and it is far and away the best thing I've ever done for myself. Not because I'm healthier and will probably live longer, but because I now reap the benefits of a society set up to punish fat people for the unforgivable crime of eating too much.

I hear the fat jokes right out loud now, instead of just a whispering breeze brushing past my ear. Men who used to let the door swing shut in my face now hold it open for me politely and look me up and down as I step past.

My own boyfriend, a man I began dating a few months after reaching my goal weight, sees the picture on my driver's license and admits he probably wouldn't have gone out with me when I looked like that. I appreciate his honesty. It's better than the good-intentioned people who gush upon seeing the new me, "You're so pretty now!" before stammeringly adding, "Not that you weren't, uh, pretty before."

The Frisky: 10 men who married (or stayed with) their mistresses

Finding yourself suddenly thin after a lifetime of being fat is a bit like stepping into that "Saturday Night Live" sketch where Eddie Murphy goes undercover as a white guy and discovers that white people act completely differently when there are no black people around.

With no outward sign of my former body type, I became a renegade spy for Team F.A.T.

Of course, I didn't discover that thin people drink cocktails and dance when fat people get off the bus. But when I lost weight, I was rewarded with membership in a club I never knew existed, where the benefits included better treatment, greater professional success and, above all, a new status as qualified participant in the social world including romantic relationships.

As the years pass, it is easy to forget. I have even, on a few occasions, found myself looking at an overweight person with faint disdain, forgetting those years I struggled with the very same issue. I hope never to gain back the weight I lost. But I have seen another side of people that I cannot forget. And with any luck, I never will.

I hope I always stay fat on the inside.