She's racing to save the environment 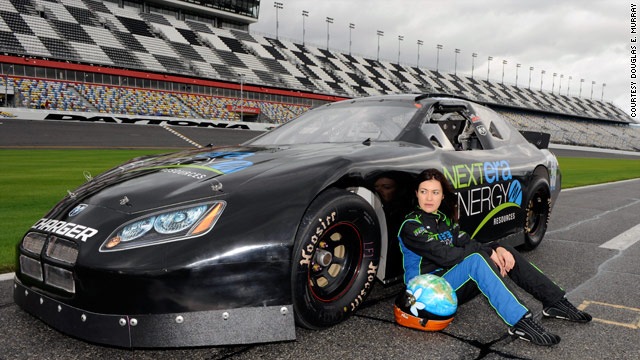 Leilani Munter hopes to sign up a team of green sponsors for the ARCA car she drives.
STORY HIGHLIGHTS

It's not as big a contradiction as you might think, she says.

Oh, she understands that a lot of environmentally conscious people will never support her racing. And she feels like a lot of racing fans will never embrace her either.

But she's not giving up either any time soon. Even though it conflicts her somewhat, she loves racing and sees it as a special chance to reach people in need of a green education.

There are millions and millions of race fans, and even competing in a lower-level series puts her in front of thousands of people where her message is a whole lot different from most, if not all, other drivers in the garage.

Still, when she's on a plane, such as a recent trip to the Gulf Coast to see the effects of the oil spill after the Deepwater Horizon explosion, she thinks carefully before responding to the person next to her who asks, "So, what do you do?"

"It is hard because it is a complicated thing, because if I bring up both and say I'm a race car driver and an environmental activist, I'll get a big question mark, a big whaaaat?" she said recently by phone from her home in North Carolina. "I oftentimes pick one or the other unless I have a lotta time on my hands like on the plane."

Unfortunately in her racing career, she has had too much time on her hands this year. She's raced in one ARCA event, getting caught up in an early race melee at Daytona, Florida, that knocked six cars out.

It's difficult getting sponsors, and not just for Munter, who wants to assemble a team of green for the decals on the car.

"It's hard for anyone for anyone to get sponsored with this economy," said Mark Gibson, who owns one full-time ARCA team and one part-time team in which he hopes to get Munter next season for all the races that are televised.

"It used to be that a woman with everything going on that Leilani has going on could get a bunch of sponsors. But right now, there's a lot of uncertainty with the economy."

It's disappointing for Munter, who dreams of getting the green message out to an audience that is often unfamiliar with it.

She wants to have five main sponsors instead of the usual one, leaving the prime spot on the hood for a message that she terms a call to action, whether it be buying more efficient light bulbs (CFLs or LEDs) or using canvas shopping bags instead of plastic ones made from petroleum.

One past sponsor of the car dealt with unfavorable consumer reaction. When criticized for sponsoring Munter's car at Daytona, Thomas H. Rawls, vice president of sales and marketing for Native Energy, wrote on the company's blog that he fully understands that racing "leaves an oversized carbon footprint."

But through sponsoring Munter, his company can reach some of the 75 million people who are racing fans.

Ultimately, though, I asked myself: How does Native Energy reach people who are not already converts on the issue of climate change? Anyone who is engaged in any broad effort to speak to the public faces this question: Do I talk only to friendly audiences, or do I face the doubters and the hostiles?

To Native Energy, the answer was face the doubters.

What Munter hopes to do is use her celebrity to lure more companies like Native Energy into venturing into the racing world where decals are just part of the deal. Munter also wants to have a merchandise trailer at the track -- most people sell T-shirts, hats and other fan items -- where she could pass out information on renewable energy and other environmentally responsible companies.

She knows it can be a tough sell to the fans and the sponsors, but her resoluteness matches her passion for the planet.

That's how you start creating change, by having a dialogue with people who don't agree with you.
--Leilani Munter
RELATED TOPICS

Kevin Donovan, a vice president at Helios Partners, sports marketing company based in Atlanta , Georgia, said they have talked about working with companies other than those known as green businesses.

"This doesn't mean compromising our principles, however," he said. "We have some limitations on who we will work with, but for any mainstream corporation -- including existing NASCAR sponsors -- who are credibly committed to environmental sustainability, we want to talk to them about how Leilani can help them communicate and showcase that commitment."

Munter, whose academic training is in biology, first realized the effect she could have on racing fans when she saw a thread on a NASCAR-oriented message board about her and her support for the movie "An Inconvenient Truth." Some people supported her cause, most did not.

She watched as the thread grew, and the bashers and supporters went back and forth. It got to the point where someone even posted a graph detailing the levels of carbon dioxide in the air.

"That's when I sat back and said, I just started a conversation about global warming and climate change and the parts per million of CO2 in our atmosphere on a NASCAR forum," she said. "That's how you start creating change, by having a dialogue with people who don't agree with you."

That's different from the 10 to 15 speeches she gives each year. Those speeches are always at environmental or renewable energy conferences. Every time she is at these green events, it's preaching to the already converted.

She said it's great but even a little frustrating because everyone is agreeing her and telling her great job and she just doesn't feel like she's made much of a change. What makes her happier is when she gets an e-mail from a racing fan like the man who wrote her to tell her about the gift her bought his wife.

The man had read on Munter's website that she was buying an acre of rainforest for each race. The man asked Munter to suggest a way he could make a similar purchase as a birthday gift for his spouse.

Munter understands her celebrity gets her a platform other people don't get.

"You wouldn't be talking with me if I was just a biologist," she said.

She tries to use her visibility to spur small changes in people. She advocates for doing away with plastic shopping bags. She thinks Americans should eat far less meat (for environmental reasons). She wants folks to use more energy efficient light bulbs. Simple things.

"If you multiply those by millions of people, then it can be a huge impact," she said.

Gibson said that Munter has made the team think more about recycling and now they take bins to the track to make sure they don't put cans and bottles in the trash. The shop is also getting new LED lights.

And NASCAR is doing better, too, Munter said. They do a good job of recycling, and she has hopes that the organization will switch from gasoline to a biofuel. If not in the race cars, she hopes it will do it at least in the big rigs that haul the cars from race shop to tracks all over the country, burning so much diesel it makes Munter cringe.

Munter hopes to get back on track at the end of September at an ARCA event in Kansas City, Kansas. In the meantime, she'll keep talking to everyone who will listen -- friend or foe -- about the planet.

This weekend, while NASCAR stops in Atlanta, Georgia, and ARCA travels to Illinois, she'll be ending a trip to Japan, where she joined the activist featured in the Oscar-winning documentary, "The Cove," who was protesting dolphin hunting.

Munter, who says when her racing career is over she'll be a scuba diving instructor, e-mailed CNN.com saying it was important for her to fly halfway around the world to get out the message of the film. The documentary about dolphin slaughter reveals the distressing secrets behind the multibillion dollar industry in captive dolphins.

You must see it, she wrote.

And she signed her e-mail:

For the Earth, Leilani.