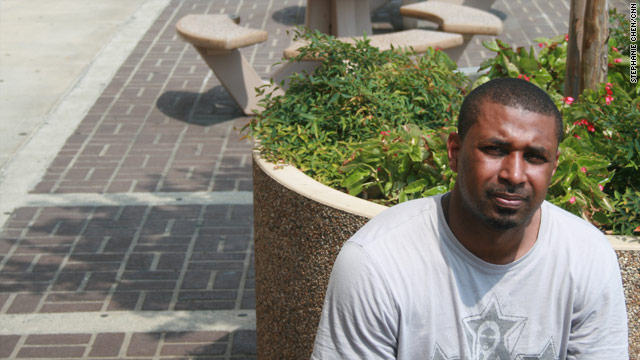 Dane Lockman, 33, is pictured at the Westwood College campus in Atlanta, Georgia. He has $40,000 in student debt.
STORY HIGHLIGHTS
RELATED TOPICS

Atlanta, Georgia (CNN) -- Dane Lockman saw a commercial advertising Westwood College while watching late-night television. The then-29-year-old single father, with a budding interest in web design, decided he would be the first in his immediate family to attend college.

By October 2006, he was enrolled in the for-profit institution to complete a bachelor's degree in graphic design. To pay for school, he took out $40,000 in private and government loans.

Lockman says he earned A's and B's at Westwood, but he wanted to take his education further by transferring to Georgia State University in late 2007, a public school that is regionally accredited, which is considered to be the "gold standard" of college education. But since Westwood is nationally accredited, Georgia State University refused to recognize Lockman's credits.

"I went into it really blindly," Lockman said. "I tried to do everything on my own."

Today, he's without a degree or a full-time job and unable to pay back his loans. He says his savings are gone. His credit score is shot because of his student debt, and he can't get credit cards. His student loans will incessantly haunt him, even if he declares bankruptcy.

Lockman is not alone.

At least 750 former Westwood students and employees have come forward with complaints about the school engaging in deceptive recruiting practices that have left some students with an unmanageable amount of debt, according to a class-action lawsuit filed in U.S. District Court in Denver, Colorado, in August.

Some students, like Lockman, have also complained that the school failed to give them accurate information about future job prospects or whether their degrees would be recognized by other schools or employers.

"This is a massive problem that's going to change the face of education if this isn't corrected," said Jillian Estes, an attorney at the Florida law firm James, Hoyer, Newcomer, Smiljanich & Yanchunis P.A., which filed the suit against Westwood. "This isn't only about the students; this is about you and I. Taxpayer money is funding the deceptive practices these schools are using. This has to be everyone's problem."

Westwood College, owned by Alta Colleges Inc., is one of about 3,000 for-profit colleges in the country. The college denies claims made in the lawsuit and has filed a defamation suit against the law firm. The defamation suit is pending.

This summer, the multibillion-dollar for-profit college industry has come under the scrutiny of the U.S. Senate. Some government officials say the industry is regulated too loosely. Senate hearings in August revealed government findings that 15 for-profit schools, including Westwood, were encouraging fraudulent practices among students. For example, some schools were caught suggesting that prospective students hide their savings to secure more federal aid.

Across the country, other for-profit schools are facing their own legal battles.

In June, a Chicago law firm filed a lawsuit on behalf of students at Illinois School of Health Careers claiming the school engaged in deceptive trade practices. Students say the college failed to inform them that the school's nursing program was not approved by the Illinois Department of Public Health. CNN called the school several times but did not get a response. The school is trying to get the court to dismiss the suit.

"We think they're innovative and have done some good things, but in some of these programs, students have high debt loads," said James Kvaal, deputy undersecretary at the Department of Education. "We are also hearing anecdotes of graduates unable to get jobs in the fields they were trained."

The number of for-profit colleges, which typically cater to working students and students beyond the traditional college age, has grown dramatically. Between 2007 and 2008, there were 2.6 million students enrolled in for-profit schools, up from 1.7 million between 1997 and 1998, according to The Institute for College Access & Success, a think tank committed to expanding access to higher education.

This is a massive problem that's going to change the face of education if this isn't corrected.
--Jillian Estes, a Florida attorney

For-profit institutions do exactly what the name suggests: They are private companies that aim to make money. Some for-profit colleges have physical campuses, some have online classes, and others have both. For-profit schools tend to cater to specific skills in a certain vocation or industry, explained Terry Hartle, Senior vice president of the American Council on Education, a trade association representing colleges.

These schools say they fill a void for students who may not have access to traditional universities or overcrowded community colleges. They offer busy students many advantages, including a shorter time period to complete degrees, in some cases, and flexible classes that can be taken online and at night, some say.

For some students, the schools' accreditation is a major concern.

Westwood College is nationally accredited, and company officials say the school makes that clear during the recruitment process, but some students complained they weren't told the difference when they enrolled.

"Westwood maintains transparency with everything it does with its students," a company spokesman said. "They go above and beyond what they need to do to create transparency."

A degree but no job

Critics of for-profit institutions allege these schools use deceptive enrollment practices, including failure to warn about student debt, similar to practices used in the recent subprime mortgage crisis.

Some, such as Sen. Tom Harkin, D-Iowa, are concerned that for-profit schools may be failing to adequately inform students of the risks of taking loans they cannot pay back.

On average, students who attend for-profit colleges are more likely to borrow federal aid, and they borrow larger amounts.

One former Westwood admissions representative, Joshua Pruyn, who testified at the Senate hearings in August, admitted to conducting interviews at which he and other representatives pressured students to enroll by manipulating their "hopes, fears and insecurities."

Westwood officials call Pruyn's claims an "isolated incident." After the hearings, Westwood College said it planned to add third-party verification programs to ensure Westwood employees are accurately explaining the costs and career outcomes of enrolling in its programs.

"It's not enough that we find out how this breakdown in our system happened," Westwood College CEO George Burnett said in a statement on the school's website. "We have to make sure this doesn't happen again."

Estes, the attorney who filed the class-action lawsuit against Westwood this month in Colorado, said she is also concerned about what happens when students complete a Westwood degree.

She said her firm has interviewed hundreds of students who were unable to find a job in the field they studied because the Westwood degree was not recognized by employers. Kvaal, deputy undersecretary at the Department of Education, also mentioned similar concerns about job placement by these for-profit schools.

It's not enough that we find out how this breakdown in our system happened. We have to make sure this doesn't happen again.
--George Burnett , Westwood College CEO

The lead plaintiff is Krystle Bernal of Denver, Colorado, who completed a degree in fashion merchandising at Westwood College in 2008 with honors. She says she paid $75,000 for the degree, but she also says it didn't help her find a job in her field.

The suit alleges Westwood made false promises to Bernal and other students in order to receive their private and federal aid.

"Defendants follow a simple formula," the suit says. "Recruit those with the greatest financial need and enroll them in high-cost institutions to maximize the amount of funding the defendant receives."

Westwood has denied the claims in the suit.

Officials at the college say they explain the financial risks and the accreditation differences to students during enrollment.

Some Westwood students say the school was affordable and helped propel their careers. A site called Westwood is Awesome, which says it is not affiliated with Westwood, tells the stories of alumni who benefited from their degrees.

"They helped really fill in the gap," wrote Steve Wiideman, 34, who graduated in 2004, earning a bachelor's degree in e-business management.

He says he landed his first job in the online field working with search engines immediately after finishing at Westwood. He says the degree helped him earn $60,000 a year. Wiideman said he was not paid to post praise of the school.

Wiideman writes on the site, "I personally had my mother look over my paperwork and got a commitment from her to back me up if I needed help every now and then."

Back in Atlanta, Dane Lockman, now 33, wishes he had asked someone to help him with the confusing college process.

He says he can't afford to pay his student loan bills piling up in his apartment. He's working as a freelance photographer to support his son. His paychecks, which depend heavily on the whims of the economy, can barely support them.

"How I could pay so much money, and it left me in this situation?" Lockman says.

Of course he could always go back to Westwood, where he is halfway finished with his bachelor's degree. But he says he's heard horror stories of classmates graduating and unable to find employment.

Lockman says he won't be doing that.

He considers his experiences at Westwood a lesson learned.