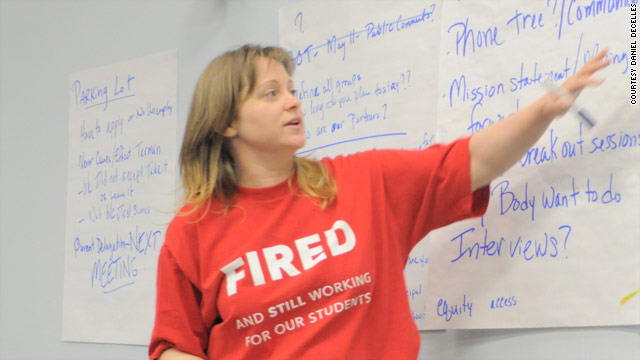 Dale Dearnley has taught science at the high school for the past four years. Earlier this year, she was fired from her job.
STORY HIGHLIGHTS
RELATED TOPICS

(CNN) -- Earlier this year a school district in Rhode Island thought they found the answer to fixing their school: Fire all the teachers and rebuild the school back up again.

Last February, the board of trustees for Central Falls, Rhode Island, voted to fire all of the teachers and staff of Central Falls High School after the school had been persistently labeled as low achieving.

In 2009 the dropout rate at Central Falls High was 37 percent, according to the Rhode Island Board of Education. Results from the New England Common Assessment Program tests revealed only 7 percent of 11th-grade students were proficient in math.

These numbers led school administrators to devise a plan to revamp the school. The U.S. Department of Education now requires states to identify their bottom 5 percent of public schools and commit to one of four ways to turn the school around: Hire a new principal, lay off staff, open a charter school or close the school.

In total, 93 members of the faculty at Central Falls High School were laid off. They gathered in the school auditorium and listened to the Executive Board call there names out, one by one. They wore red, the school color, as a sign of unity, but for the teachers it was a demoralizing moment.

Read about ideas to improve our schools from award-winning teachers

President Obama weighed in on the controversial, public firing.

"If a school continues to fail year after year after year and don't show signs of improvements, then there has got to be a sense of accountability. That's what happened in Rhode Island," said President Obama during a speech in May.

For the past 11 years, language teacher Jo-Ann Boss has taught thousands of students in her diverse, working-class neighborhood of Central Falls. She was a graduate of the high school herself. She says no one understands the community like she does.

"I think that people in Central Falls know that the school is here," Boss said. "But it's not priority number one. Number one is survival."

Dale Dearnley, also a Rhode Island native, has taught science at the high school for the past four years. Having just lost her job, she said, Obama's comments did not sit well with her.

"It was just a reactionary statement," Dearnley said.

Boss believes the teachers didn't deserve to be fired at all.

Still, the two teachers will resume teaching at Central Falls in September.

Over the summer, the teachers union and the school district quietly negotiated the rehiring of most of the teachers, who still have concerns about their role in turning around the high school, as well aptitude testing mandated by the federal No Child Left Behind program. Opponents argue it forces teachers to teach to the test rather than educate.

Dearnley adds an interesting point. "Most jobs don't give a multiple-test choice yearly to test the progress of their employees." She prefers a portfolio type of assessment where tests are only a fraction of the measuring tool.

Dearnley and Boss said they are eager to start the new school year. For them, returning to the classroom without any resentment after being fired isn't a given, but it is their goal.

For Boss, the moment when she heard her name called is a memory that sticks with her, even as she moves forward. "The first time I've ever gotten my name called out in that auditorium was when I graduated from there. So, to have my name called out for doing something that was wrong," she said, "it was, like, surreal."

"The people that agreed that I needed to be fired have never been in my classroom, never spoken to me" Dearnley said. "As a matter of fact, my name was pronounced wrong."

"It was just so devastating to hear all these teachers that have been dedicated and I know and love and their names aren't even being pronounced right. It was devastating," Dearnley added.

These are the painful lessons Dearnley and Boss hope they never have to learn again.