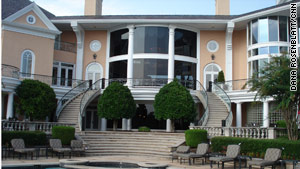 Many items inside the 32,000-square-foot home, which will be torn down, were on sale this weekend.

Johns Creek, Georgia (CNN) -- Some came for the bargains. Others arrived just to capture a glimpse of a lifestyle from a largely bygone era of decadence and conspicuous consumption.

Parts of the home's architecture, such as the rotunda in the foyer inspired by the dome of the Brunelleschi Cathedral in Florence, Italy, also were up for bids at the weekend estate sale.

The megamansion was recently sold after sitting on the market for more than a decade. Dean decided to liquidate most all of the home's contents after learning of the new owner's plans to level the palatial estate.

He teamed up with Atlanta-based organization Luminocity, which earned a portion of the proceeds to organize the estate sale. Luminocity plans to debut a 360 degree Performance Art Light Parade Experience late November, and representatives say some of its proceeds go to various local charities.

"We've been driving by this house for years and have always wondered what's inside," said Marlisa Grady, who brought her kids Madison and Ryan to the estate sale on Saturday.

"I promised the kids I'd get them something here, as long as it was under $100," Grady said.

The family walked out with an old-fashioned gumball machine for $75, taken from the game room.

The self-made baron of Dean Gardens made his fortune in the early 1970s after starting a financial services software company.

After the company went public, he and his first wife, Lynda, spent four years and $25 million to create the home of their dreams -- a neoclassical mansion for the nouveau-riche featuring 10 bathrooms and eight bedrooms. It is situated on 58 acres of landscaped Italian and French gardens that rival that of Versailles. The grounds feature an 18-hole golf course, grass tennis courts, an amphitheater and a conservatory.

Soon after the home was complete, the couple split, and Dean was faced with operating costs ranging from $750,000 to $1 million a year.

It's the hefty maintenance, says Dean, that prompted him to sell what he calls his legacy.

Dean had received several offers during the 15 years his home was off and on the market -- including one rumored to be from Michael Jackson.

Dean wouldn't comment on who had expressed interest, saying only that all the offers had been "flaky" until the one he accepted several weeks ago.

Though he could not disclose the details of neither the selling price nor the buyer, Georgia real estate records show the property sold for $7.6 million.

But the rumors that actor and filmmaker Tyler Perry is the new owner are true, said one estate sale organizer, adding that Perry plans to level the property to build a more energy efficient and sustainable residence.

Attendees took pictures of the mansion's extravagantly appointed rooms that were aptly named the Moroccan room, the Egyptian suite, the French Bedroom, the Contemporary room, the Asian suite and gardens and the 1950s game room.

Some attendees said the opulence of Dean Gardens is over the top given the current economic climate.

"Big mansions are a thing of the past. People want something more economic," said Marcia Foltz, who came to the estate sale with her daughter, Katy Foltz.

Throughout the event, an upbeat Dean mingled with shoppers and oglers in his former home, accepting offers on everything from $10 demitasse espresso cups to a 24-karat gold sink for which he paid $88,000.

The gold sink resembled "Flavor Flav's mouth," joked Joan Rivers during an episode of the TV program "How'd You Get So Rich?" featuring Dean.

Until its doors were open to the paying public (ticket prices ranged from $50 for one day to $100 for two-day event), Dean Gardens had been an enigma of opulence and kitsch.

"I've known about the legacy of Dean Gardens for 15 years," said Paul Mallchok, who drove from Chattanooga, Tennessee.

"I remember there was a promotional video [that described it] as the most amazing home recently built in America, and it's a living up to every single expectation I ever had -- wretched excess," Mallchok said wryly.

Dean, a thrice-divorced grandfather of eight, says he's not sentimental about saying goodbye to anything, including the estate itself, and feels a sense of relief that he'll be living there for only one more month.

"I grew up in a house with four rooms the happiest kid you've ever seen," Dean said. "And now I want to go back to a four-room house."