How 12 dog breeds got their names 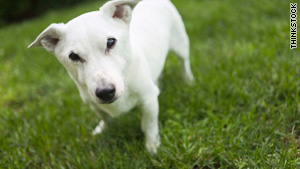 (Mental Floss) -- Every dog owner knows why they gave their dog its name, but how well do you know the story behind their breed names? Let's take a look at where a handful of common breeds found their monikers.

John Russell was born in Dartmouth, England in 1795, and over the years he became quite a hunting enthusiast. While he was studying to become a clergyman at Oxford, he met a milkman who had a white terrier bitch named Trump who seemed to be the perfect dog for fox hunting.

After convincing the milkman to sell him the dog, Russell began breeding Trump to develop a line of terriers with the stamina to hunt foxes all day and the courage to go after game that had slipped into holes.

Russell actually has two dogs named after him. We're all familiar with the Jack Russell terrier, but the Parson Russell terrier, a similar breed with longer legs, also takes its name from Russell and is recognized as a separate breed.

The little dog's name sounds funny, but its origins are pretty straightforward. The Lhasa Apso was originally bred as a watchdog for Tibetan palaces and monasteries; it was hard for an intruder to sneak in past the watchful, yipping pooches.

The "Lhasa" in the name comes from the city of Lhasa, Tibet's longtime capital. Apso is a Tibetan word meaning "bearded," so the breed's name signifies that it's a longhaired dog that originated in Tibet.

The lovable big-eared hounds don't get their name from a person named Basset. Rather, "Basset" comes from the French word bas for "low" and refers to the dogs' low-slung statures.

These feisty little terriers originated in the Scottish Highlands, where they were renowned for their abilities as hunters of rats and other small prey like rabbits.

The dogs were particularly adept at hunting in the cairns, manmade piles of stones that dot the region as navigational markers. Thus, the breed became known as the Cairn terrier.

The spotted breed takes its name from Dalmatia, an Adriatic region that lies mostly within modern-day Croatia. Dalmatians have long been used as sentinels and guard dogs in the region, but it's not entirely clear that they originated there.

Paintings and writings show Dalmatian-like dogs in various regions of Europe as far back as the 14th century, and the dogs have been used in Dalmatia since at least the 18th century. Since the dog was most commonly associated with the region, it became widely known as the Dalmatian.

The poodle may be thought of as a fancy, snooty dog today, but it actually had fairly rough-and-tumble origins as a gun dog. Their name reflects their early work as retrievers who would swim out after fallen waterfowl.

Pudeln was a Low German word that meant "to splash," so these brave retrievers were known as pudelhund, or "water dogs." The word eventually evolved into the English "poodle."

The beautiful grey dogs with the expressive eyes have probably only been around since the 19th century. According to tradition, that's when Grand Duke Karl August of Weimar began to selectively breed hunting dogs that were fast, had strong noses, wouldn't back down from large game like wolves or wildcats, and were smart.

Karl August's breed allegedly became fashionable among his fellow Weimar noblemen, and the breed gained popularity as a bird-hunting dog as well.

Oh, the Places Your Ashes Will Go!

Spaniels have been around as far back as the 14th century, and these popular pets also got their starts as gun dogs. English hunters prized the dogs' particularly skilled tracking of woodcocks, so the dogs became known as "cockers."

This herding dog's name is pretty straightforward if you know a bit of French. The breed originated in Flanders, and French farmers who prized their working spirits named the Bouvier des Flandres, which translates into "Cow herder of Flanders."

The dachshund is another breed with an unexpectedly ferocious origin. When the breed was first created in the early 17th century, hunters were attempting to create a fearless, elongated dog that could dig its way into a badger's hole and do battle with the tenacious little mammals.

This spaniel takes its name from King Charles II of Britain, who was often depicted in paintings and tapestries in the company of a small spaniel and was reportedly "seldom seen without his little dogs."

The exact origins of the word "beagle" are a bit mysterious, but anybody who has spent much time with the breed will believe the most commonly accepted story. The American Kennel Club traces the name back to the 16th century, when the hounds became associated with the French word becguele ("noisy person") thanks to the din of their howls during hunts.