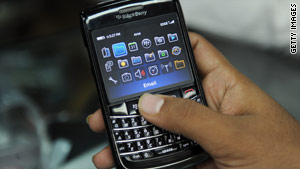 The upcoming class of college freshmen does most of their work digitally, according to the Beloit College Mindset List.
STORY HIGHLIGHTS
RELATED TOPICS

(CNN) -- For most college freshmen starting school this fall, e-mail is passe and wearing a watch on your wrist is, well, unnecessary, according to the Beloit College Mindset List for the Class of 2014, most of whom were born in 1992.

The list was first created by the Wisconsin school in 1998 to remind professors what cultural factors have gone into shaping the lives of their students.

While e-mail was revolutionary for their parents, today's college freshmen find it terribly slow, instead choosing to use their opposable thumbs to send dozens of text messages a day on their smartphones, which they use for telling time rather than strapping on a watch and surfing the web.

Home computers have always been a part of their lives, although the ones they first played on in preschool are now in museums. The PCs and Apples of the early 1990s had hard drives with smaller capacities than today's flash drives, used monochromatic monitors and were not connected to the internet.

And technology is not the only thing that has changed, either.

In the world of entertainment, Snoop Doggy Dogg is just Snoop Dogg. Ice-T is an actor who plays a New York police detective on "Law & Order: Special Victims Unit," instead of a rapper stirring controversy with his song "Cop Killer."

And Clint Eastwood is a sensitive Oscar-winning director, not a tough-as-nails detective known as Dirty Harry.

The Class of 2014 now has hundreds of channels to watch with nothing on, while their parents had at most a few dozen when they were growing up. Nirvana is now classic rock. And their parents' favorite TV shows have always been showing up as movies -- "The Brady Bunch," "The A-Team" and "The Addams Family."

Beethoven has always been a big drooling dog, not a classical composer. Fergie is a pop singer, not a former English princess. Barney is a purple dinosaur, not a deputy sheriff in Mayberry.

Justice Ruth Bader Ginsburg has been on the Supreme Court since today's freshmen started crawling. Bill Clinton was elected president the year most of them were born.

The Iron Curtain is something they know about from history books and Czechoslovakia has never existed during their lifetimes.

In the world of sports, Bud Selig has always been the commissioner of Major League Baseball. Tiger Woods has been golfing professionally since they were 4, and Michael Jordan is better known for his underwear commercials than he is for playing basketball.

And finally to the medicine cabinet, where the Class of 2014 can find toothpaste tubes that stand on end and bandages that have always come in multiple colors.

"The college class of 2014 reminds us, once again, that a generation comes and goes in the blink of our eyes, which are, like the rest of us, getting older and older," the college said in announcing this year's list.