Man tries living on coupons for a year 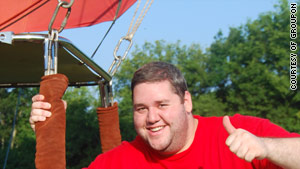 Josh Stevens, 28, took on Groupon's challenge to live off the company's coupons for a year.

(CNN) -- Imagine living off those random deal-of-the-day coupons that are e-mailed to your inbox. The possibilities are endless. You could ride a hot air balloon, relax at a spa or try that new French restaurant.

That's the life of Josh Stevens, 28, of Chicago, Illinois, who is surviving on unlimited free coupons from the internet company Groupon. Stevens plans to continue the coupon life for a year.

Under the Chicago-based company's challenge launched in May, Stevens can't use or even touch money, but he's equipped with a laptop and online coupons that can be used for lodging, dining and shopping.

So far, he's trekked across the Midwest to the East Coast and down South.

But not all places accept the company's coupons. To make things trickier, Stevens is embarking on the cashless challenge alone.

He's allowed only five visits from family and friends, with each visit lasting less than a day. Strangers, fans and supporters may donate a place to crash for the night, a car ride or plane ticket. He often barters with them using his coupons from the company.

In the last few years, a number of social group-buying websites like Groupon have emerged, including LivingSocial, BuyWithMe, Adility, SocialBuy, Half Off Depot and 8coupons.com. Most companies e-mail coupon offers that are posted online for a short time and the discount becomes available only after a certain number of people buy the coupon.

Stevens gets all the Groupons he wants free. If he successfully completes the yearlong no-money challenge, he will win $100,000, the company said.

CNN caught up with Stevens, who is about a quarter of the way through his yearlong challenge. He was heading to Minneapolis, Minnesota, and doing some last minute laundry at a stranger's house when he took our call.

CNN: Why did you apply for the challenge?

Stevens: I thought it would be a lot of fun and hysterical and a great adventure. When I first saw the contest, I immediately thought this is someone who can be a cross between Anthony Bourdain, who is trying new things, and MacGyver, who has to be resourceful.

CNN: What was your life like before you began the challenge?

Stevens: I had done corporate auditing for a year, and I decided I didn't want to sit in a cubicle every day. I thought I'd go back and get more education, and right as I started working on those applications, this fell in my lap.

CNN: What were you allowed to bring for the year?

Stevens: I started with one pair of shoes, socks, underwear and a paper suit made of Groupons. They gave me a laptop, camera, internet card and phone. They put it in a paper messenger bag.

CNN: Where did you go first on your trip?

Stevens: Since I was in the paper suit, I used a coupon for a carriage ride and then went to two clothing stores and bought a couple of outfits with my coupons in Chicago.

CNN: What's the hardest part of living without cash?

CNN: Have there been any mishaps along the way?

Stevens: I kind of overdid it with a yoga class I did in Washington, D.C. I don't know much about yoga. I think I just overstretched. I was fine that day. And the next day and then a day after that, all of my muscles tensed up, and I struggled with it for a few weeks.

CNN: What is the most interesting barter so far?

Stevens: I needed to park a rental car. I had a Zipcar, and I was going on a boat cruise just outside of D.C. I got there, and there was no where to park. It was pay-in-the-garage or on-street parking. It was all 24-hour enforced. So I drove around and found hotels and one accepted the coupons. I told my valet my situation and traded him a Groupon for him to take a similar boat cruise.

CNN: Where do you sleep?

Stevens: I sleep anywhere. I've slept in people's apartments, houses and guest rooms and on the floor. I've slept at hotels, including ones I've had Groupons for.

CNN: Have you been homeless?

Stevens: I've actually always found something, which has been fortunate. There's only been three times down to the end of the day where I didn't know where I was staying that night.

CNN: What has surprised you the most on this journey?

Stevens: One couple in D.C. -- for two weeks -- they let me stay at their apartment. Some of these people give me their keys to their house within hours of meeting me. They say, "Make our home your home." They are so hospitable and willing to help. I've become really great friends with some of them, and it's been a really great experience.

Stevens: I got a plane ride over Louisville. While we were up in the air, the pilot asked if I want to fly. He gave me a few tips on how to do it and we flew up there for 10 minutes or so. I also got to drive 20 miles in a late-model stock car. I really enjoyed the sailing lessons in Boston [Massachusetts]. The same day, I did the Segway tour of Boston.

CNN: What personality characteristic has helped you the most?

Stevens: Just being able to relate and get along with people. I think also resourcefulness and being able to figure out how to get from place to place.

CNN: Has there been a time when you almost failed the challenge?

Stevens: Every once in a while, someone will drop something like a dollar bill on the ground. You go to reach for it, but I can't even touch money during the challenge. Or someone will try to hand me some money, and I have to bow out and say I can't.

CNN: What do you miss the most?

Stevens: Definitely my girlfriend, family and friends. I can visit people I know if it's where they live, but they can't come visit me. I get five exceptions. People can visit me for like one day.

CNN: How does social media help you?

Stevens: That's my lifeline. It's amazing. I think maybe the best example was when I was in Nashville [Tennessee], and I was trying to get to Kentucky. So I put on Facebook I needed to get a bus ticket. Within 12 minutes, I had 12 responses offering to buy me a ticket.

CNN: What do you plan on doing after this challenge?

Stevens: I want to leave myself open. I'm meeting so many great people. It's hard to imagine who I will meet and what opportunities might present themselves nine months down the road.