Still single? What's the matter with you?

By Karin Anderson, Special to CNN 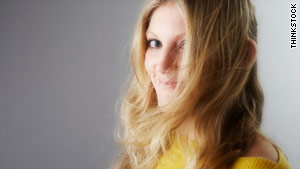 Editor's note: Karin Anderson is a professor of psychology and counselor education at Concordia University Chicago. She is also the author of "It Just Hasn't Happened Yet."

(CNN) -- "You're such a beautiful girl! I can't understand why you're still single!"

I get it all the time --the seemingly innocent queries, perplexed, pitying looks, and left-handed compliments. So lovely, so charming, so talented --how in the world am I still single? One of life's great mysteries....

And sure, the observations appear benign. At first blush, they'd be considered flattery.

A closer look, however, reveals a secondary message lurking just beneath the surface -- "Well, you certainly seem wonderful, but you're in your forties and still single. What's that about? Maybe you harbor some man-repelling neurosis or you're such a control freak you scare 'em all off. Something must be going on or else you'd be married like any normal 40-year-old woman!"

They often think it, even if they don't say it. Then again, sometimes they do say it.

"You probably intimidate a lot of men. Maybe tone it down a notch."

"You've got to make an effort. But don't hunt 'em down! Men can sense desperation!"

I shrug my shoulders and laugh it off. Seriously? Are we really having this conversation? It's the new millennium! Didn't women picket and petition and burn their bras to get us past such archaic thinking? I thought this mentality went out with beehive hairdos and vacuuming in heels.

Still . . . I'll admit it. Every once in a while the comments get the better of me. Maybe, they're right. It's true I haven't had a decent relationship in years. I could be messing things up without even realizing it....

So I take a look around, investigate a bit. It's time to get to the bottom of this.

What I find is rather alarming. Myriad messages from sundry sources proclaim that, yes, I'm doing it all wrong. Chick flicks depict quirky, lovelorn women who, after Pygmalionesque metamorphoses, emerge "fixed" and finally suitable for marriage.

Women's mags warn of "Dating Don'ts" and relationship faux pas while bookstores' self-help sections admonish with titles like "You Can Keep A Man: Stop Sabotaging Your Relationships" and "The Ten Stupid Things You Do to Chase Away Prince Charming."

I feel myself beginning to cave -- who am I kidding? I can't refute this arsenal of why-I'm-dateless data. I guess they're right. It is my fault I'm still single! I'm too needy, too independent, too crazy, or too reclusive. Too emotional, too cerebral, too passive, or too domineering. Too something.

Great, now what? It'll take a complete personality overhaul to straighten out this mess! A daunting task, to be sure, but I'm on my way. All I have to do is identify and correct the character flaw (or two or three) that repels the good ones, and then I, too, will find Mr. Right, just like all my married friends!

Which is precisely where the logic breaks down.

Think about it. If single women possess imperfections and eccentricities which prevent us from snagging a man, then such personality shortcomings would appear much less frequently in the population of happily married women, right? Sure. Ask any husband -- he'll tell you. Wives show a full range of kinks and idiosyncrasies, just like the rest of us.

Furthermore, many of my happily married girlfriends exhibit extreme versions of the very traits that supposedly stymie my success. If my neurotic nature so utterly repels the fellas, how is it my Xanax-popping neighbor has a husband, 3 children, a garage full of anti-bacterial gel to pacify her OCD ? If I'm so horribly controlling, how did my bossy, domineering sorority sister badger her man down the aisle before the age of 24?

Sure, single women have deficiencies. So do married women. So do all of us! The tragic flaws of singles flare no more flagrantly than anyone else's. Theories asserting that these objectionable qualities explain our solo status amount to mere conjecture at best and flat out absurdity at worst.

I know you want more -- a formula or algorithm for changing whatever it is that blocks your relationship success. If we're all sullied and marred, how do some of us still manage to meet "The One"? What's their secret?

Well, that much I can tell you. I'm happy to let you in on this undisclosed, highly classified information. Are you ready? Brace yourself. THEY GOT LUCKY. And we will too someday, but it just hasn't happened yet.

Next time they come at us with, "You're such a beautiful girl! I can't understand why you're still single!"

All together now, "It just hasn't happened yet!"