I lost to the mistress, but won a better life 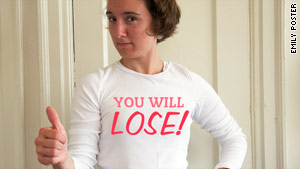 Most of her competitions were imaginary, author says she finally realized.
STORY HIGHLIGHTS
RELATED TOPICS

(The Frisky) -- Little does the guy on the treadmill next to me know, I'm winning. He was ahead of me at first, but I've caught up. Now I'm out in front.

In reality I know the stranger couldn't care less about me, and my competitive spark is just a way to motivate myself during an otherwise boring run, the way it pushes me at work and with my writing. But if I'm not careful, that spark can escalate into a wildfire, threatening to burn everything in its path.

The Frisky: 30 things women should quit doing by 30

My Chinese name, Si Qi, comes from the idiom "jian xian si qi": Upon seeing an admirable person, one wants to be like that person. In other words, if you're awesome, I want to be as awesome -- nay, awesomer -- than you.

On the playground I loved running faster than everyone else. I loved performing last during piano recitals. After hearing how mediocre everyone else was, I got pumped about playing Beethoven the best. I loved winning writing contests and wowing everyone with my stories and poems.

But when my mother compared me with the daughters of her friends, I felt less pumped. Why couldn't I get straight A's like so-and-so? Why wasn't I as thin? Why was I shy and not outgoing? Instead of feeling motivated to better myself, I only felt bad.

The Frisky: 10 famous men who stayed with their mistress

Those feelings continued into adulthood. While I wasn't constantly seething with jealousy, there were certain people who'd set me off, basically grown-up versions of my childhood rivals. There was Mei, the brilliant and self-possessed engineering major my college crush picked over me. There was Olivia, my brother-in-law's wife, whom my husband's Korean parents favored simply because she was Korean.

While I lost to Mei and Olivia in some ways -- I'd never be as girly, assertive, or Korean -- in other ways I won. My college crush would turn out to be an arrogant liar. Unlike Olivia, I didn't spend three hours getting ready every morning, didn't care about what brands I wore, and thought beyond making money and babies.

Then came my ultimate rival: my husband's mistress.

The Frisky: Is monogamy still important in relationships?

She was older than I was. A point for me. I was the one my husband came back to and begged for forgiveness. Another point for me. She was pregnant with his child. A billion points for her. I still had a ring on my finger. A billion for me.

It took me a year to realize that keeping my husband wasn't enough of a prize, and that even if I "won," I'd still come out a loser: enraged, depressed, and suffocated. After I left him, I could finally breathe again.

Three years later, I met my boyfriend Alex. I was ready to take a chance with a relationship again, and luckily for me, Alex was too. While his feelings for me were obvious -- he wanted to spend every day with me, he asked me to move in just a few months after we met -- I still felt insecure.

When he mentioned his female friends or an ex-girlfriend, the green-eyed monster would rear its ugly head. So what if Friend A was materialistic and a borderline-alcoholic? She was also fun and brilliant. Who cared if Alex said he wasn't in love with Girlfriend B anymore?

The Frisky: 10 signs your new fling is doomed

At first I kept my feelings bottled up, partly because I knew I was being irrational, and partly because I wanted to win. When my ex was angry, I was too scared to confront him directly so I'd give him the cold shoulder until he finally caved. But that didn't work with Alex.

"What's wrong?" he asked right away.

Now I was forced to talk about my fears, and when I finally articulated them -- "I'm afraid you like your friend/co-worker/ex more and that you secretly want to leave me" -- they seemed ridiculous, although in my mind they had seemed very real.

I assumed I felt this way because I had been cheated on, but I began to realize that it was more than that. I'd grown up being compared with others, and what I considered a healthy competitive streak actually stemmed from insecurity.

To feel good about myself, I had to be smarter, cooler, faster, more talented, more together, younger, prettier, older, or funnier than people who often didn't even realize they were in competition with me.

The Frisky: 8 ways to deal with jealousy

At first, Alex offered to cut ties with certain acquaintances and not to mention exes anymore. "You're more important to me," he said. But I knew that wouldn't fix anything. I'd still have problems with jealousy. Any random person was a potential target.

Like my race with the guy on the treadmill, I came to realize that most of my competitions were pretend. My childhood friends didn't wonder what grades I got. Mei barely knew I existed. Olivia was only concerned with ingratiating herself with our in-laws, regardless of any comparison with me. I don't know how the mistress felt about "the wife," if anything, but in the end it didn't matter.

The Frisky: 5 reasons never to defriend an ex on Facebook

Now when I feel threatened, I remind myself that there's no real threat and my feelings are the only real thing about the situation. While I'm not completely over winning and losing -- I still feel a pang when a fellow author secures a book deal, and a moment of glee when a foe shows his true snotty colors -- I try not to dwell. Instead of competing to beat others, I compete to reach goals I've set for myself, and look to others for inspiration.

With Alex, I'm trying to let go of competitiveness altogether. Does it really feel that great to "win" an argument? Who cares about Alex's female friends and ex-girlfriends and how I measure up to them? He certainly doesn't. What really matters are the consideration, openness, and support we show for one another. What counts is that we're on the same team. As long as that's true, we both win.