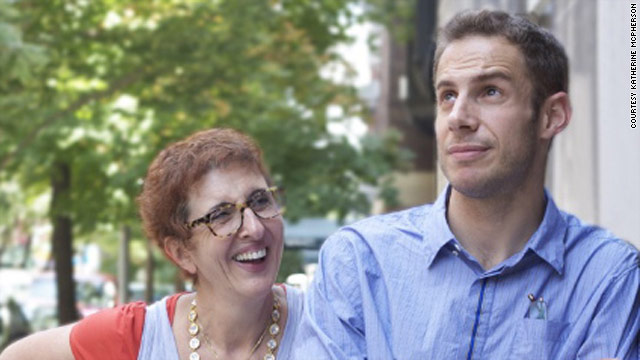 They chat on their cell phones several times a week, debating politics and sports. They catch up over pasta and salad at their favorite Italian joint tucked in New York's Upper East Side. They consider themselves travel enthusiasts and once explored Paris, France, together.

Just like any thoughtful best friend, who can be nosy at times, his mother relentlessly seeks the perfect woman for him. She sets him up on dates. She brags about him to friends who have daughters his age. This month, the 63-year-old launched "Date My Single Kid," an online dating site to expand the scope of potential suitors for her son.

"We aren't trying to start a scientific matchmaker service like eHarmony," says Geri Brin. "We are doing it like a mother would do it. You know what your child wants. I know what Colby wants 100 percent."

Some critics of matchmaking parents may think so, but Colby Brin lauds his mother's active participation in his dating life. He estimates she set him up on at least 30 dates before her site went live. Some dates went well. Others lacked a spark, like a girl from an art gallery he dated recently.

"The way I look at it is I'm not sitting at home resting on my laurels," said Colby Brin, who added he still snags dates through friends and social events. "I'm meeting women, but she can also help. It can't hurt. I'm not embarrassed and I think it's pretty fun."

The idea of moms and dads meddling in a young person's love life may evoke shudders and headaches for some singles. But parents like Geri Brin say parental involvement is natural today, when many parents act more like friends of their children. Already her site has lured in more than 200 parents, who are advertising their 20-, 30- and 40-something children as available for dates.

We are doing it like a mother would do it. You know what your child wants. I know what Colby wants 100 percent.
--Geri Brin, 63, mother

"As I got older, I saw more of my mom in myself," said Colby Brin, who is studying for a master's degree in sports management at New York University.

Parents know best, or at least that seems to be the theme of reality television shows and movies over the last few years. On MTV's show "Parental Control," parents try to get rid of their child's current significant other by picking new dating prospects for them. The 2006 romantic comedy "Failure to Launch" chronicles parents' efforts to get their 35-year old slacker son, played by Matthew McConaughey, to move out by paying a woman to date him and lure him into living a more grown-up life.

There's nothing new about parents interfering in their children's love lives. Until the 1940s in the United States, the family was usually the broker in a relationship, according to preliminary research from Michael J. Rosenfeld, a professor of sociology at Stanford University.

Parents became less involved with their children's relationships during the latter part of the 20th century because parental control declined and the average age of marriage increased, the study said.

Matchmaking parents also exist across various cultures. Shaadi.com is a popular Indian matrimonial website where parents, including those who live in the United States, post their children's photos and information in hopes of securing them a spouse. In Japan, some parents eager to marry off their child throw matrimonial parties at hotels and conference centers.

How couples meet in the United States has changed drastically since internet dating began in the last few decades. Popular sites like Match.com and OkCupid.com have exploded, with record numbers of participants.

In a way, Geri Brin's "Date My Single Kid" site combines the old with the new, the antiquated concept of parental matchmaking with the power of new technology.

I'm meeting women, but she can also help. It can't hurt. I'm not embarrassed and I think it's pretty fun.
--Colby Brin, 31, single son
RELATED TOPICS

On the site, the profile of Christy, a 35-year-old single businesswoman in Orlando, Florida, popped up. "Must love dogs, like to travel and be kind to in-laws (fabulous ones, of course). I want her to find a man who will love her as much as her father has loved me for almost 40 years. Would be willing to relocate for the right man," writes the parent.

Another mother submitted an entry for her son Brian, a 32-year-old accountant and security guard, who enjoys spending time with friends and grilling out. "He is a gentleman, opening doors for his dates. He is a good kid!" the mother added.

Meddling parents aren't always successful. Sometimes a first date is the last, says Terry Beck, a 58-year-old mother in California. She tried setting up her son Jordan Beck, a 27-year-old former pro-football player, with girls several times without any luck. Then she found his future wife, Hillary, through friends she met at a conference.

Terry Beck knew her son was busy with games and practices, so she called Hillary's parents to set up a phone conversation for the two. Five years later, Jordan and Hillary Beck are married with four children.

"I knew the kind of character he wanted in a woman and the kind of commitment," Terry Beck said. "But it didn't work on the first few times."

Geri Brin doesn't expect an online post about her son to result in marriage. She simply wants him to find a young woman who is "driven, passionate and has a wonderful heart and soul" for a long-term relationship. Colby Brin agrees with his mother's description of the ideal woman, but he says physical attraction also matters.

Her son is a catch, his mother says. He is tall and slender, a University of Michigan graduate, a sports fan, a basketball lover, a half-marathon runner, a reader, an avid listener of classic rock and occasionally hip hop and he's confident and well-spoken, she says.

If a relationship becomes serious, Colby Brin says his girlfriend won't have to fret. He says his mother tends to be more hands-off with his love life once he is in a committed relationship.

He hasn't gone on a date through "Date My Single Kid" yet. He says he's an optimist in the dating game. He is hoping for the best and preparing for the worse, a broken heart.

But even after a breakup, he knows he's got Mom to turn to.