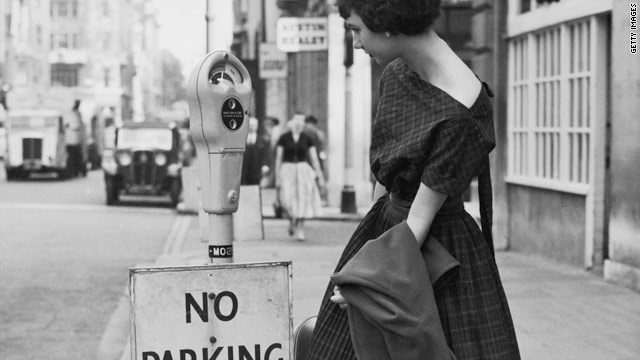 (CNN) -- As you sift through your pockets Friday looking for change to pay the parking meter, stop and take a moment to wish it a happy birthday.

It was on this day 75 years ago that the first parking meter was installed.

And 75 long years later, these coin-gulping contraptions remain as despised as they were when the first 150 of them were put in place in downtown Oklahoma City, Oklahoma, on July 16, 1935.

Concerned that parked cars -- that sometimes never moved for weeks -- were hurting downtown businesses, city officials were eager for a solution, according to the Oklahoma Historical Society.

Enter Carl Magee. It's not surprising that one of the most hated urban fixtures was designed by someone who practiced not one, but two, of -- what polls have consistently found to be -- America's most despised professions: law and journalism.

As soon as the meters went up that humid day in July, incensed residents gave them the thumbs down.

A case contesting the legality of meters was quickly settled in the city's favor, wrote Michael Dean of the Oklahoma Historical Society.

Stores on city blocks with meters saw an increase in business and profit. And soon every block wanted some.

By 1941, 140,000 were in use, the Smithsonian Magazine wrote. Today, the number is in the millions in the United States alone.

Magee left his job as editor of a daily newspaper and started a parking meter company. The design of the device has remained largely unchanged over time.

One can only assume that the 75th anniversary of the first parking ticket is just days away.