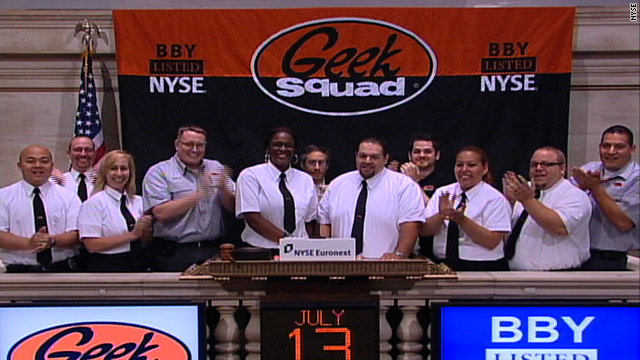 It's "Embrace Your Geekness Day," and Wall Street embraced geeks by letting them ring the starting bell at the New York Stock Exchange on Tuesday morning. Those bellringers are also known as members of Best Buy's Geek Squad, who drive to the rescue of people trying to master the computers they bought from the store.

This embracing holiday is just one of a handful of geeky observances: "Darwin Day," "Pi Day," "Towel Day" (think "Hitchhiker's Guide to the Galaxy"), "Geek Pride Day." There's even a "Take Your Webmaster to Lunch Day."

But this particular day -- "Embrace Your Geekness Day" -- is copyrighted by Wellcat Holidays, and meant for people who are "into dungeon games, comic books and doing vampire dress-up," as well as those who "spend endless hours going strange places on the internet." According to Wellcat Holidays, "this is your day to roar!"

So why do Americans celebrate people who are defined by Webster's dictionary as, "any person considered to be different from others in a negative or bizarre way, as a teenager seen as being socially or physically awkward"?

According to Benjamin Nugent, author of "American Nerd: The story of my people," a geek is "a nerd who is defined by his knowledge on a certain subject." (Nugent points out that this is a far cry from what the word "geek" used to mean -- a carnie who was so unskilled that all he or she could do was bite the heads off live animals.)

Thanks to Silicon Valley and the charismatic representation of geekdom by people like Apple's Steve Jobs and Steve Wozniak and Microsoft's Bill Gates, geeks are fashionable and associated with economic power, Nugent said.

Even their interests, like video games and computer technology, "have become so refined that they're irresistible to a huge percentage of the population," said Nugent.

Genevieve Bell, a cultural anthropologist with Intel Labs, agrees. "There are far more products, programs, services and applications than there's ever been before," she said. "And they speak to a wider market than ever before."

Since geeks are strongly inclined to master technology, said Bell, they now represent dominance over a domain the general and less geeky members of the public would like to conquer.

Geek holidays, while probably not necessary for true geeks to accept their quirks and interests, give others ample opportunity to celebrate and nurture their inner geek. Along with the mainstreaming of geek interests comes a bittersweet trade-off for geeks who had been marginalized in the past.

Nugent said that when geeks and nerds were not as readily accepted in American culture, they had a thriving, fraternal community spirit. Now that technology, sci-fi, comics and gaming are mass consumer experiences, Nugent said, geek communities are fracturing.

But in 2010, letting your geek flag fly has become a source of pride for many Americans. Bell said it's a natural fit for a country that's known as a nation of individuals.

Scott Kauffman, CEO of Geeknet, the company that runs popular sites Slashdot.org, SourceForge.net and ThinkGeek.com, said that geeks will define the 2010s much as the GenXers defined the 1990s.

Kauffman likens geek obsession to the fan in everyone.

"People are getting in touch with their inner geekdom and that can take the form of many different kinds of passions or obsessions. It used to be a 'sports fan' or a 'sports nut,' now it's a geek," he said.

Geek mainstreaming began decades ago, said Nugent, when "Star Wars" and the "Lord of the Rings" books burst on the scene to unprecedented popularity. Science fiction and fantasy, once the bastions of geek and nerd culture, became huge entertainment moneymakers thereafter, he said.

"More recently, our pop culture has become generous towards nerdy characters," said Nugent. Through TV shows like "The OC" and Judd Apatow's movies, geeks have become protagonists -- leading men, even -- and not just comic relief, he said.

Bell goes so far as to say being geeky is downright American.

"Think about the railways or the electrification of America or the moon shot, even the Manhattan Project," she said. "There's always a strong sense that to have technical prowess is a quintessential piece of what it is to be American ... and what it means to be successfully American."

The mainstreaming of geek interests naturally leads to another American pursuit: capitalism. Wellcat Holidays does, after all, make money on its copyrights.

In the last year, Geeknet, a company that harnesses the natural talents of geeks and caters to their interests, saw an explosion of sales. Geeknet offers geeks a one-stop shop: geek-written content, free open source code and all the niche tchotchkes a geek could want.

Companies appealing to a broader audience are ready to use images of geeks in order to see that same kind of success. Apple's PC and Mac commercials showcase two geeks -- old school and new -- while Intel's "rock star" commercials show off how geeky the company is (because their rock stars are inventors.)

"Communications technology, especially, has such a patina," said Bell, "and geek culture puts a face on all this technology." Geeks evoke the ideas of diversity and innovation, she said, and it's valuable for companies to commodify that.

Nugent agrees. "I think what those companies are exploiting is a desire for the reassurance of technical expertise," he said.

"This sort of cuddly nerd character who fixes your computer and makes everything right is reassuring," said Nugent. "This isn't an intimidating expert who will say things you don't understand and condescend to you."

Best Buy's Geek Squad, for example, uses the image of geeks to appeal to a large audience. Kauffman said this kind of marketing says to customers, "If you're not a geek and you want what geeks have, because geeks are cool and have cutting edge -- bleeding edge -- technology, we can bring that to you."

Nick Devita, a member of the bell-ringing Geek Squad team, thinks Best Buy has plenty of geek. "We are a group of people ... that take the passion we have for technology and help other people embrace it, so they can have passion about it as well," he said.

"I think what's interesting about geek culture is that it doesn't need to be marketed to, much," said Nugent. "If you have a new product, they will embrace it on its own merit, because they're geeks. They read the trade magazines, and they read articles in Wired and they obsess about these things in chat rooms. "