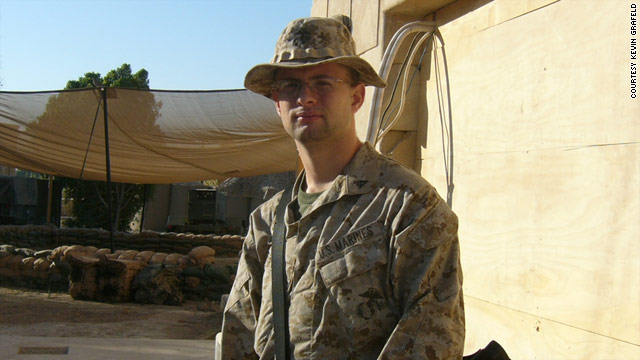 Kevin Grafeld is one of many veterans in their 20s who returned from Afghanistan and Iraq unable to find a job.
STORY HIGHLIGHTS
RELATED TOPICS

(CNN) -- After Brooks Douan finished serving in Iraq for the Marine Reserves, he returned home in October 2008 to battle something many civilians had already been fighting: unemployment.

To survive, the 24-year-old took temporary jobs in his home state of South Carolina. He donned a pumpkin costume during Halloween for extra cash. He took a temporary gig as a photographer, but he was let go shortly. The economy was to blame, the studio owners told him.

When Douan eagerly signed up for the military in high school, recruiters told him veterans were coveted hires in the civilian workplace, targeted by employers for their hard work ethic and discipline. Now, in the toughest economic times since the Great Depression, Douan is finding veterans are not immune to the woes of the economy.

"I thought it would be easier for me to find work because people would be like, 'Oh you're a veteran, you served your country,' " he said. "But now, I don't think it makes one bit of a difference."

For months, the unemployment levels for veterans has been prompting concern among government officials and the nonprofit world trying to help veterans readjust to civilian life. Some politicians have been pushing for legislation that would help returning veterans from Iraq and Afghanistan find jobs. Others have been addressing startling rates of homelessness among veterans -- a number that could surge, some advocacy groups say, if the unemployment issue is ignored.

Unemployment for veterans from 18 to 24 hit 21.6 percent in 2009, slightly higher than the unemployment rate of 19.1 percent for their civilian counterparts, according the most recent March report from the Bureau of Labor Statistics. Of all the veterans from past wars, soldiers returning from Iraq and Afghanistan have experienced higher rates of joblessness, the BLS reports on its web site.

"I always enjoyed working with my hands," he explained.

During the housing boom before the recession came, he worked 60 hours a week. Sometimes, he had to turn down jobs because he was so busy. The money was good, he says.

But when Hutchison returned from Iraq in December 2008 after working as a emergency medical technician in the Army National Guard, he applied for dozens of jobs without any luck. He's not alone. About 10 percent of veterans from 25 to 34 are unemployed, the BLS reported.

Theodore Daywalt, president of VetJobs.com, a national nonprofit that aids veterans in the job search, says unemployment rates among young veterans have increased because members of the National Guard and Army Reserve are serving longer stints abroad. They are also being called overseas more often. Soldiers are finding their jobs no longer exist when they return home, Daywalt said.

VetJobs.com polled 700 members of the Tennessee National Guard brigade in Afghanistan and discovered 320 of them don't have jobs waiting for them when they return.

"We have made our members of National Guard third-class citizens," Daywalt said. "We want them to fight for the country, and yet we make it impossible for them to get good jobs."

Read about how half of Americans are hurt from economy

Bob Madden, assistant director for the National Economic Commission at the American Legion, said his organization will put on almost 250 career fairs across the country this year to help returning former find jobs.

We have made our members of National Guard third-class citizens.
--Theodore Daywalt, president of VetJobs.com

"It's bad," Madden said. "It definitely needs to be addressed. We need to figure out how to solve these problems."

Some military experts say they believe some companies are reluctant to hire people in the National Guard or Army Reserve because they may leave for duty again. Companies cannot afford those kinds of abrupt changes in an economic downturn, experts say. The Uniformed Services Employment and Reemployment Rights Act was passed in 1994 to ensure that soldiers would have their jobs when they returned, but some employers have found loopholes around the law, these experts say.

After 15 months in Iraq, Shane Hornbeck, 24, of Portland, Oregon was shot by a sniper. He is decorated with a Purple Heart. But none of that matters in the job search, he says.

Like many soldiers trying to secure a job, he is having trouble translating some of his military skills into the civilian workplace.

He's been unemployed since 2008. He suffers from post traumatic stress disorder and traumatic brain injury.

"A lot of people think TBI (traumatic brain injury) and as soon as they hear that, they think I'm broken," Hornbeck said.

Read about the stigma of being unemployed

A lot of people think TBI (traumatic brain injury) and as soon as they hear that, they think I'm broken.
--Shane Hornbeck, Iraq war veteran

The gloomy economic climate has been difficult for soldiers, say sociologists who have studied how soldiers transition into the civilian workplace. One disadvantage soldiers have in the job search is the stigma surrounding highly publicized conditions such as PTSD, says Morten G. Ender, a professor of sociology at the U.S. Military Academy at West Point.

Sociology professor Meredith Kleykamp at the University of Maryland, College Park, says veterans traditionally have been preferred over civilians in job hiring. In her study, she created fictitious resumes with comparable skills for veterans and nonveterans and applied to entry-level positions advertised online. More employers responded back to a veteran than a nonveteran, she said.

However, Kleykamp said some veterans' skills, such as working on a tank, might be not be directly applicable to a civilian job. Veterans who had experience with clerical work or engineering had an easier time finding a civilian job.

"Part of the challenge veterans face is that everything isn't equal," she said. "The kinds of experience they may have attained may not be the kind of experiences that translate into the work world."

Kevin Grafeld, a 25-year-old who served in the Marines, felt defeated after unsuccessfully looking for a job for more than two years. Now he is receiving assistance from Wounded Warriors Project, a nonprofit that is putting him back in school for his associate's degree. Grafeld is hopeful the degree will help him find employment.

He says he's barely getting by after exhausting his savings last August. His career future may be uncertain and his financial prospects are shaky, but Grafeld says he wouldn't take back the time he served in Iraq.

"It's been my life's dream to serve my country," Grafeld said.