Adding up everything on Fourth of July 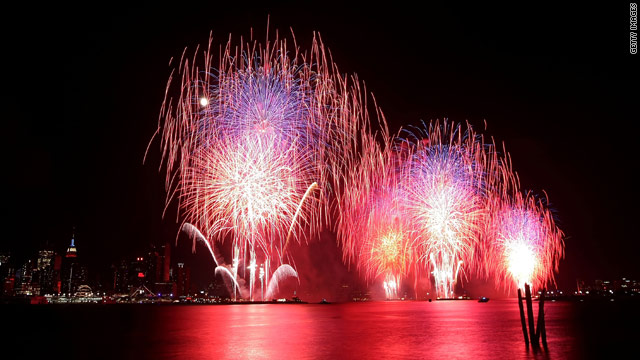 If people didn't gobble down the 150 million hot dogs they are predicted to eat on the holiday, the wieners could be strung across the nation five times, from San Diego, California, to Washington, according to Tom Super of the National Hot Dog & Sausage Council.

About one-third of hot dog lovers will smear them with mustard, almost a quarter prefer ketchup, 17 percent will put chili on their dogs, 9 percent relish and 7 percent onion.

Folks in Chicago, Illinois, like their dogs in yellow mustard, dark green relish, chopped raw onion, tomato slices and topped with a dash of celery salt, according to the council. Kansas City, Missouri, dogs are served with sauerkraut and melted Swiss cheese. Chili, cheese and jalapenos are the favorite toppings for dogs sold at Minute Maid Park in Houston, Texas, the council's website says.

But New Yorkers eat more dogs than any other group in the U.S., and they top them with steamed onions and mustard.

Some of those dogs will be swallowed in the 12 minutes allotted to contestants of Nathan's Fourth of July Hot Dog Eating Contest -- an event held nearly every year at New York's Coney Island since 1916. Last year's record of 68 hot dogs and buns was set by Joey Chestnut.

About one in every four hot dogs and pork sausages eaten by Americans this holiday will come from Iowa, according to the USDA National Agricultural Statistics Service. The beef hot dogs, steaks and burgers sizzling on backyard grills are likely to have originated in Texas. And the barbecue or fried chicken most likely will come from either Georgia, Arkansas, North Carolina, Alabama, Mississippi or Texas.

The odds are about one in three side dishes of baked beans started in North Dakota. The tomatoes on the table have a 7 in 10 chance of coming from Florida or California. And there is a 66 percent chance that the corn on the cob was grown in Florida, California, Georgia, Washington or New York.

Much of the holiday feasts will be washed down with beer.

"In fact, according to IRI Infoscan data, the Independence Day holiday period is the number one occasion for sales and servings of beer in the United States," says Jeff Becker, President, Beer Institute.

American Pyrotechnics Association predicts a booming day on Sunday despite the recession. The group says on its website that more fireworks are ignited on the Fourth of July than on any other country's celebration in the world. It also notes that 213.2 million pounds of fireworks were used in 2008.

All those celebratory explosions will create some casualties.

Last year, there were two fireworks-related deaths and some 9,000 injuries that required treatment at hospital emergency rooms, according to the Consumer Product Safety Commission. Serious burns and eye injuries are the most common, says the agency, reminding people that even the harmless looking sparklers reach temperatures of about 2,000 degrees Fahrenheit -- hot enough to melt some metals. Read safety tips

It wasn't fireworks that led to the deaths of two Founding Fathers on the Fourth.

John Adams and Thomas Jefferson both helped America become independent of Britain. But in 1800 when the two men ran against each other for the presidency, the campaign turned ugly, according to Mental Floss magazine. It took about 12 years to repair the friendship before the two men began exchanging letters. On July 4, 1826 -- the 50th anniversary of the Declaration of Independence -- both men died.