Give kids social skills to get ahead 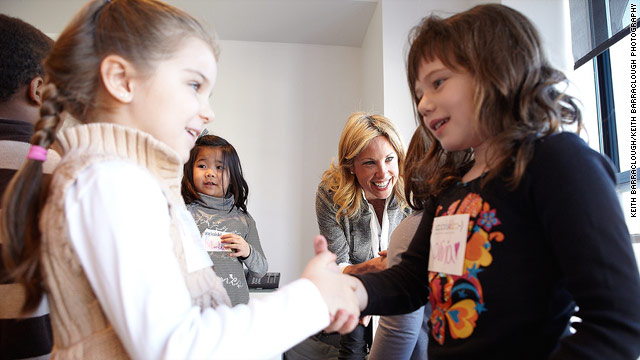 Faye Rogaski supervises her young students as they learn how to properly shake hands when greeting someone.
STORY HIGHLIGHTS
RELATED TOPICS

(CNN) -- The college students who showed up with bare midriffs and never contributed to discussions during Faye Rogaski's communication classes were surprised when they weren't picked for coveted internships and jobs.

They would also e-mail the public relations executive without so much as a greeting but with demands such as "I need a reference," or "I need a letter of recommendation." No "please," no "thank you," no face-to-face handshakes, introductions or follow-ups after classes.

These same students would "friend" Rogaski on Facebook -- it was a class about branding yourself, after all, so the social networking site genuinely came into play from an academic standpoint.

But Rogaski would find her Facebook newsfeed filled up with updates from these young adults posting salacious statements and tagging one another in drunken and/or raunchy photos.

Rogaski was taken back by their behavior and wondered whether the students realized she was a potential future boss or colleague.

That's when it clicked for her: Teach basic social skills to children because if they want to get far in life, manners are a requirement, not an option.

She started socialsklz:-) to help kids learn what they were not being taught at school.

Socialsklz:-) logo includes a smiley face icon to convey its fun, interactive, hip relevance. Rogaski is quick to point out that these are not fancy manners and etiquette classes.

"It's not pinkies-up and pearls at high tea," Rogaski told CNN. She likens it more akin to "Life Skills 101."

During a class for children 4 to 7, they were taught about the importance of eye contact and a firm, but not too tight,handshake. They were also led through basic greetings as well as proper phone etiquette when calling friends. The children practiced with each other in interactive scenarios.

After being taught the principles of writing letters, they wrote thank you notes to their parents to highlight the importance of being thoughtful in life. In the coming weeks, they will learn online and text messaging etiquette as well as table manners and much more.

Rogaski politely corrected kids on some basic errors, such as when one little girl kept saying "ax" when she really meant "ask."

The 'tween group of 8- to 12-year-olds was slowly but surely being taught to drop their penchant for saying "um," incorrect usage of the word "like" and uttering the dreaded phrase "ya know."

The kids were issued cards called Frownies when they broke Rogaski's "like, um, ya know" rule and cards were counted up at the end of class. One little boy racked up 11 "um" Frownies.

The 'tweens also went on a field trip to Dunkin' Donuts. On the way, one of the boys held the elevator for everyone while another held doors open. Each child ordered his or her own doughnut of choice and had to speak clearly and enunciate. Rogaski also encouraged them to have their selections ready so as not to hold up the line.

The teen group, which meets for two hours a week, learns social graces as well as skills needed for college and job interviews.

Penny Loretto, a career counselor at Skidmore College, warns the first few minutes of a job interview can mean the difference between getting a job or not.

"Appropriate dress attire, a firm handshake, a relaxed smile and maintaining direct contact are all essential elements of a good interview before the actual process even begins," says Loretto who previously worked in Human Resources for a large institution.

And don't go to an interview without doing something else important she warns.

"The advice I usually give students and my adult clients is to be sure to practice, practice, practice," Loretto says. "Practicing is the only way to become better at interviewing, and it's something all job candidates must take the time to do."

The socialsklz:-) teen students are also taught about e-mail etiquette and about the perils of posting something on a blog that they might regret later. They also learn the do's and don'ts of posting material on sites such as Facebook, Twitter and YouTube.

Young job seekers have to transition from being a family member, friend or student to a professional in their online communications, warns Jill Ferrall, assistant dean for career development in the School of Business at Quinnipiac University in Connecticut.

She says don't be too casual and write things such as "Hi FirstName," "hey," "thx," "np." And don't send a recruiter a friend request on Facebook.

But within 24 hours after an interview with a potential employer, Ferrall says, the job applicant should write a thank you note.

Rogaski said the real reward is when parents approach her and tell her that they see their kids using their newly acquired social skills out in the real world. She is also proud when she sees first-hand the confidence that her classes instill in her students.