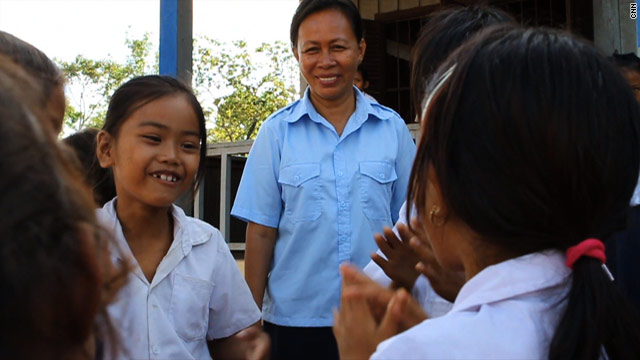 Koh Ker, Cambodia (CNN) -- Ponheary Ly has survived genocide, the murder of several family members -- including her father -- and life in poverty. Today, she's working to build a brighter future for the children of Cambodia -- by helping them go to school.

"Education is important for me," says Ly, "because my father was a teacher."

Primary schools are free to attend in Cambodia, but not all children go. With most of the population living in rural areas, children often lack transportation to get to school -- and many families keep children home to help on the farm and earn money, said Ly.

Those able to go often must pay a small fee -- around $20 a year -- to buy uniforms and supplies, and many families can't afford it.

Cambodia is one of the poorest nations in the world, where about 40 percent of the population of 14.7 million live off less than $1.25 a day, according to World Bank.

"They don't have enough to eat," said Ly. "How can they have the money to buy uniforms and supplies?"

Ly, 47, is bridging that gap. She and her foundation are helping thousands of rural children attend school by providing them with uniforms, supplies and other services.

Ly's family was thrown into poverty during the Khmer Rouge regime. Their father was the main breadwinner, and when he was killed in 1977, along with 13 other family members, the family was left with nothing. After the regime dissolved, Ly, her six remaining siblings and their mother were forced to start over.

She became a teacher in 1982, struggling to get by on her government salary. But she used her meager earnings to work with other teachers to create libraries, and she offered free instruction to children who couldn't afford lessons.

When Cambodia opened up to tourism in the 1990s, Ly -- who speaks Khmer, Russian, French and English -- became a licensed tour guide to earn more money.

As she guided tourists to the ancient Angkor Wat temples in Siem Reap, she saw children begging tourists for money at the temples. On her tours in the countryside, she noticed that many children didn't go to school at all.

Ly began using tip money -- and soliciting donations from tourists in lieu of tips -- to support the children's education. She started with one girl who was in school but lacked the resources to continue, and by the next year she was helping 40 children.

As Ly was slowly growing her program, one child at a time, she met an unlikely ally from Texas.

Lori Carlson was visiting Cambodia in December 2005 and ended up on one of Ly's tours.

"She explained to me the work that she and her family were doing in the community," Carlson said. "When I saw what she was doing and saw how incredibly effective it was and how important it was in the country, it became very compelling to me."

Carlson was so moved that she returned to Texas and helped establish the Ponheary Ly Foundation.

"I set the foundation up to initially just help funnel funds to her so she could broaden her project," said Carlson, 50. "Then over time I made several trips [back] to see how things were going. ... Eventually I just reached the tipping point where I thought, 'I'm just going to move to Cambodia.' "

Carlson resigned her job with a printing company in Austin, Texas, sold her house and made the move. And she hasn't looked back.

Today, the foundation helps support more than 2,000 children at four schools throughout Cambodia. The schools were chosen because many children in neighboring villages lacked the resources to attend.

At two of the schools, those who can't afford to attend are supported by the foundation. At the others, the foundation supports all of the children.

"After several years, I see the change," Ly said. "They know how to read and write."

Children are given two uniforms and two pairs of shoes each year, along with school supplies. At the school in Koh Ker, located three hours from Siem Reap, all the children receive breakfast each day, along with medical care. In addition, the foundation provides bikes to graduating sixth-graders and the top students in the fourth and fifth grades.

Because teachers' wages are low and absenteeism is often high, Ly and her organization also pay teachers additional stipends each month depending on the number of sessions they're teaching.

The group is building a library and setting up a clean water project for two of the schools.

Carlson said the change in the rural children "has been huge."

By educating rural children, Ly said she hopes they'll help build up their communities to become literate, critical thinking people -- qualities she believes can help her country avoid the destruction it experienced under the Khmer Rouge.

For Ly, it's about encouraging the students to spread their knowledge to friends, communities -- and parents.

"I ask [the parents] to learn from their kids," she said. "If the children in this village get a good education, it helps the poor village very much. They know about the situation of their village very well, what the villagers need ... [and they] can improve their village faster than the other people who come here."

Ly still works as a tour guide and estimates that at least 20 percent of her earnings go toward supporting the children. In addition, she spends about 50 percent to 60 percent of her time on her efforts, without compensation.

Ly said she hopes to see the children ultimately go to college. She credits her passion for education to her own makeup, saying her "father's blood" runs through her.

"My father, he has to be proud of me, because he stay with me all the time ... in heaven, and in my heart. I'm very happy to have him as my father, even just a short time."

Want to get involved? Check out the Ponheary Ly Foundation website at http://www.theplf.org/ and see how to help.