The long-term relationship rut -- with no marriage in sight 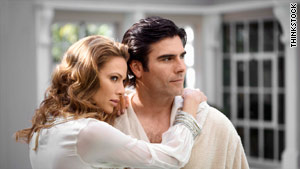 More couples are skipping the marriage vows but deciding to live as though they are married.
STORY HIGHLIGHTS
RELATED TOPICS

(CNN) -- Gowns have been fitted, caterers have been contracted and venues rented as June marks the busiest period of wedding season.

But not all long-term couples will be heading down the aisle, according to Hannah Seligson's book, "A Little Bit Married."

Seligson explores the trend of serious twenty- and thirty-something couples who invest years and even a decade in a relationship without the intention of ever getting married.

Just because a couple plays house by cohabitating or taking vacations with each other's families, that doesn't necessarily equate to marriage, Seligson said. The median age of marriage is at a record high (about 26 for women and 28 for men), according to the U.S. Census Bureau in 2009.

Her book, released earlier this year, combines scientific research and interviews with more than 160 couples who are "a little bit married."

CNN asked Seligson about these lengthy relationships, cohabitation and advice for couples who are in long-term relationships.

CNN: How do you know when you are "a little bit married"?

Seligson: My baseline is one year in a monogamous relationship. Do you see this as someone you are making big sacrifices and life decisions around? Are you factoring the other person into your long-term decisions?

CNN: What characteristics do you see in couples who are "a little bit married"?

Seligson: There are many permutations. You can live together. You can move across the country to a city you hate because your boyfriend or girlfriend has a job there. It's the sense your life together is moving in unison. For example, the day-to-day staple activities are done together. You buy furniture together but you say, "What happens when if we broke up? Who would get the couch?" There is no definite sense this will culminate in marriage.

CNN: Why are people having these lengthy monogamous relationships that don't result in marriage?

Seligson: It used to be you got married for economic reasons. A woman needed a man to support her. It was too risky to have sex outside of marriage because there was limited access to birth control. Now people get married because they want to have kids. Now there is a sense that marriage is a sense of adulthood. People want to be fully formed before they get married. You're also seeing a social acceptability around cohabitation and delaying marriage.

CNN: In your book, you profile a couple that stayed together in a serious relationships for eight years without getting married. Why stick together for so long?

Seligson: There is this very powerful thing called the inertia theory: You live together, and you form these bonds. People say when they break up, "It's like a divorce." It's very hard to move out when you live together. Also, part of it is complacency, and couples aren't always on the same page. Someone is dating, and they are thinking this is a past agreement -- that we are going to get married because we've been together for X years.

CNN: In your book, it sounds like communication is a key factor for interpreting whether a relationship is headed for marriage. How can couples communicate better?

Seligson: I was surprised how little communication there was between couples. You need to ask yourself: What does it mean when you move in together?

CNN: Some people believe cohabitation before marriage can affect the chances of marriage. What are your thoughts?

Seligson: Sure there is the saying, "Don't buy the cow when you can get the milk for free." I live with my boyfriend, and I don't think he perceives he's getting free milk. It's a personal decision. The idea of being afraid to move in implies men don't want to get married and that's wholeheartedly incorrect. Men do want to get married. They are just on a different time frame. If you want to move in with your boyfriend, discuss what it means be on the same page about it.

CNN: So men do want to get married?

Seligson: Men do want to get married. It's just that the timing that's different. A man's decision to get married is often correlated to income. I heard this from many men that they want to be able to provide. Men want to feel they are in a financially stable position before they get married. If you look at career rhythms of young people, it takes a long time to get it together.

CNN: The recession probably isn't helping much either?

Seligson: You can see the impact of the recession from two angles. People are moving in together to save money and putting off having a wedding because it's so expensive. The economics of having a wedding has to be factored in. The average wedding costs 20 grand, and we live in a culture where it seems like you have to buy into all of that hoopla.

CNN: Why did you decide to write this book?

CNN: Trends of a tendency to shift back and forth. Do you think these long-term relationships without marriage will become less popular?

Seligson: It's hard to imagining it shifting back because there are so many factors that aren't slowing down, such as women entering workplace and the double-income, no-kid phenomenon. I don't have my crystal ball, but it's hard to imagine this trend reversing. I don't think people will delay marriage inevitability, though, because women have a biological clock. It will probably rise and level off at some time.