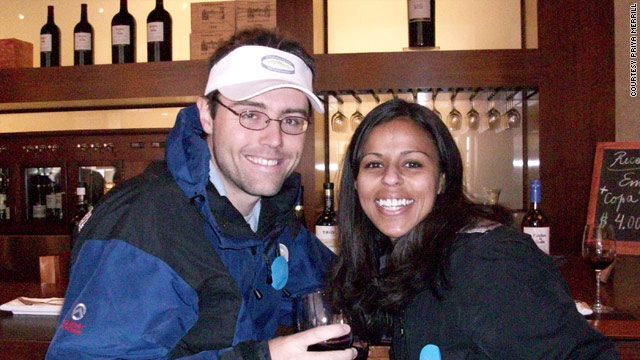 Priya Merrill, 27, and husband Andrew Merrill, 30, married in August. They are part of a growing trend of interracial marriages.
STORY HIGHLIGHTS
RELATED TOPICS

(CNN) -- The first time Priya Merrill, who is Indian, brought her white boyfriend home for Thanksgiving in 2007, the dinner was uncomfortable and confusing. She still remembers her family asking if Andrew was the bartender or a family photographer.

The couple married last August, and her Indian family has warmed up to her husband despite their racial differences.

"I think we get the best of both cultures," said Merrill, 27, of New York. She added, "Sometimes I just forget that we're interracial. I don't really think about it."

Asian. White. Black. Hispanic. Do race and ethnicity matter when it comes to marriage?

Apparently, race is mattering less these days, say researchers at the Pew Research Center, who report that nearly one out of seven new marriages in the U.S. is interracial or interethnic. The report released Friday, which interviewed couples married for less than a year, found racial lines are blurring as more people choose to marry outside their race.

"From what we can tell, this is the highest [percentage of interracial marriage] it has ever been," said Jeffrey Passel, a senior demographer for the Pew Research Center.

He said interracial marriages have soared since the 1980s. About 6.8 percent of newly married couples reported marrying outside their race or ethnicity in 1980. That figure jumped to about 14.6 percent in the Pew report released this week, which surveyed newlyweds in 2008.

From what we can tell, this is the highest [level of interracial marriage] it has ever been.
--Jeffrey Passel, Pew senior demographer

Couples pushing racial boundaries have become commonplace in the U.S., a trend that is also noticeable in Hollywood and politics. President Obama is the product of a black father from Africa and a white mother from Kansas. Supermodel Heidi Klum, who is white, married Seal, a British singer who is black.

But not everyone is willing to accept mixed-race marriages. A Louisiana justice of the peace resigned late last year after refusing to marry an interracial couple.

In 1958, a woman of black and Native American descent named Mildred Jeter had married a white man, Richard Loving. The couple married in Washington, D.C., instead of their home state of Virginia, where state laws outlawed interracial marriages. The couple was arrested by police. Their case made its way to the Supreme Court in the case Loving vs. Virginia in 1967, where the justices unanimously ruled that laws banning interracial marriages were unconstitutional.

In the decades after the court's ruling, the U.S. population has been changed by an unprecedented influx of immigrants. The growing numbers of immigrants, said Pew researchers, is partially responsible for the increase in interracial marriages.

The Pew Center study released Friday found that marrying outside of one's race or ethnicity is most common among Asians and Hispanics, two immigrant groups that have grown tremendously. About 30 percent of Asian newlyweds in the study married outside of their race, and about a quarter of Hispanic newlyweds reported marrying someone of another race.

David Chen, 26, of Dallas, Texas, is Taiwanese. He is planning a wedding with his fiancee, Sylvia Duran, 26, who is Mexican. He says race isn't an issue, but parts of their culture do play a role in their relationship. They will probably have a traditional Chinese tea ceremony at their wedding.

"The thing that we really focus on is our values and family values," instead of their race, he said. "We both like hard work, and we really put a focus on education."

The African-American population also saw increases in interracial marriage, with the number of blacks participating in such marriages roughly tripling since 1980, the study said. About 16 percent of African-Americans overall are in an interracial marriage, but researchers point out a gender difference: It's more common for black men to marry outside of their race than for black women.

The gender difference was the reverse in the Asian population surveyed. Twice as many newlywed Asian women, about 40 percent, were married outside their race, compared with Asian men, at about 20 percent.

"We are seeing an increasingly multiracial and multiethnic country," said Andrew Cherlin, professor of public policy and sociology at Johns Hopkins University. "The change in our population is bringing more people into contact with others who aren't like them."

The Pew Center also found education and residency affected whether people married interracially, with college-educated adults being more likely to do so. More people who live in the West marry outside their race than do people in the Midwest and South, the survey found.

"If I'm a college graduate, I am going to marry another graduate," Cherlin said. "It's of secondary importance if that person is my race."

We are seeing an increasingly multiracial and multiethnic country.
--Andrew Cherlin, professor at Johns Hopkins University

Technology is also making it easier for people to date outside their races, said Sam Yagan, who founded OkCupid.com, a free Internet dating site. He said his site, which receives 4 million unique visitors a month, has seen many interracial relationships result from people using its services.

Adriano Schultz, 26, who was born in Brazil and identifies himself as having a "mixed ethnicity," met his wife, Teresa, who is white, through the site in 2006. A year later, the couple married.

"I don't feel as if ethnicity for us was a big issue," said Schultz, of Indiana. "It was more about personalities and having things in common that really drove us together."

Yagan attributes the increase in interracial relationships to the Internet, which makes it easier to connect with someone of a different race. People who live in a community where race is an issue can meet someone of another race more privately, than say, instead of having to start their relationship in a public setting.

"You don't have to worry about what your friends are going to think," he said. "You can build the early parts of the relationship."