Does your name shape your destiny? 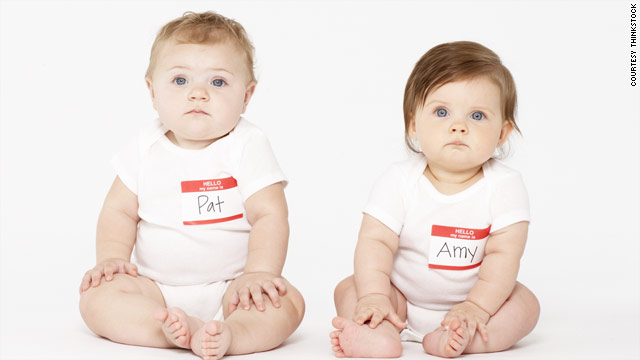 (CNN) -- Wes Moore appeared in his hometown newspaper, The Baltimore Sun, 10 years ago because of his impressive academic achievements. Around the same time, he noticed a story in the paper about a jewelry store robbery in which a police officer and a father of five was killed.

He learned one of the convicted killers shared his name.

While Wes Moore the Rhodes Scholar would become a combat veteran in Afghanistan and a White House fellow, Wes Moore the convicted felon was sentenced to life in prison. Their correspondence through letters and prison visits led to the release of the book "The Other Wes Moore" this spring.

"The name was the first thing that drove me," said Moore, 31, on what inspired him to befriend the inmate.

Other people may have wondered who also lays claim to their name. Google a relatively common name such as "Steve Jones," and a biologist, musician and golfer appear. And Steve is not even among the Top 10 boys' names of the last century.

Tell us your stories about your name

Names are becoming increasingly diverse in the United States. Cleveland Evans, former president of The American Name Society, says more parents are seeking distinctive names for all sorts of reasons, from paying tribute to their child's ethnicity to giving the child a unique Google legacy.

"They want their child to have something neat or inspiring," said Michael Campbell, owner of Behindthename.com, a website housing the meanings of about 16,000 names.

Parents are spending more time mulling over what to name their child, said Laura Wattenberg, founder of the book and blog BabyNameWizard.com. The possibilities are endless, and not even experts such as Evans can pinpoint an exact number of names in America.

In recent decades, Wattenberg said popular baby names are becoming a smaller fraction of what parents are choosing for their children.

Every culture in the world has specific designations for specific people. It's something human beings have had as long as they have had language.
--Cleveland Evans, former president of The American Name Society

The Social Security Administration announced this month that Isabella reigns as the top baby girl's name in America. But even today's most popular name of Isabella represents only half the number of babies named Mary when it was the top girl's name in 1960.

The SSA, which began documenting name popularity in 1997, tracks only the 1,000 most popular names each year.

The 1960s, a decade of tremendous political and social shifts, is responsible for expanding the pool of names, several naming experts noted. More Americans began to reject conformity and embrace individualism.

"Nobody wants their kids to fit in anymore," Wattenberg said. "They want them to stand out."

One unusual name that made it into the SSA's 1,000 most popular names recently is Nevaeh, which is "heaven" spelled backward. Other unusual names for babies include picking places such as Brooklyn and Memphis.

Some celebrities are exemplifying the trend. Actress Gwyneth Paltrow stirred up mixed reactions when she decided to name her child Apple in 2004. When Angelina Jolie named her children Shiloh and Maddox, naming experts predicted those names would become popular in coming years. Maddox has already seen steady gains in the past five years, climbing to No. 180 on the SSA list this year.

Parents can be influenced by Hollywood, said Michael J. Astrue, SSA commissioner. He thinks the name Isabella reached the top spot because of the hit "Twilight" movie series, in which the heroine is named Bella. Astrue also speculated the name Lindsay fell from No. 381 in 2008 to No. 524 in 2009 because of actress Lindsay Lohan's legal woes.

Immigrants to the U.S. historically have adopted more American-sounding names. Italian immigrants in the earlier part of the 20th century sometimes dropped vowels from the end of last names to assimilate.

Now ethnic-sounding names are making a comeback. Some naming experts have cited an uptick in names such as Barack, inspired by President Barack Obama.

Parents from immigrant families may give their children an ethnic name to remain tied to their culture, said Hannah Emery, a graduate student of sociology at the University of California-Berkeley. She is studying naming trends.

Biracial and multiracial couples are more careful of the names they select for their children because they want the name to reflect different ethnic backgrounds, she said.

So what's the big deal about picking the right name?

If some academic studies are correct, a name can have consequences for a person's job, residency and even school grades.

Your name really has to stand for you on your own.
--Laura Wattenberg, author of The Baby Name Wizard

Brett Pelham, a psychology professor at the University of Buffalo in New York, discovered names can affect where a person decides to live. Women named Georgia and Virginia are about 44 percent more likely to move to a state with the same name, according to his research.

Pelham attributes the naming phenomenon to 'implicit egotism," the idea that people unconsciously select things, places and other people that resemble them.

A name can affect academic achievement, said professors Leif Nelson, now at the University of California-Berkeley, and Joseph Simmons at Yale University, in their 2007 study. After analyzing grades, they found students with names that began with a C or D earned lower grade point averages than those that started with an A or a B.

These studies are not absolute. But one thing is clear: A name is more than a name.

"It's a decision that people really do put in time, effort and weight," says June Rifkin, author of "The Everything Baby Names Book," a compilation of baby names released in 2006. "I don't think it is haphazard. There is a lot of consideration because their child will have to have their name for the rest of their lives."